Galaxy cluster nebula one of the earliest things recorded outside the solar system. Andrew Masterson reports. 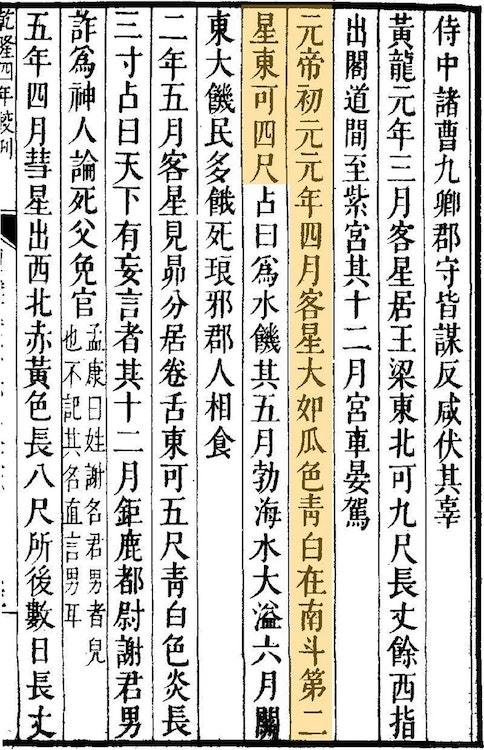 The text, dating from 48BCE, recording the glow in a particular spot in the night sky.

Scientists have repeated observations made almost 2070 years ago by Chinese astronomers, confirming one of the earliest ever discoveries of an event occurring beyond the solar system.

In 48BCE, the Chinese sky-watchers recorded a bright glow in a particular part of the night sky.

Now a team of researchers led by astrophysicist Fabian Göttgens from the University of Göttingen in Germany have shown that the observations related to a nova – an explosion of hydrogen on the surface of a star, located in a global cluster known as Messier 22.

The cluster, one of at least 150 thus far identified in the Milky Way, is a tightly packed group of stars located close to the galaxy’s centre, some 10,600 light-years from Earth. It is sometimes called the Sagittarius Cluster.

They discovered the remains of a nova, now a red nebula of hydrogen and other gases, with a diameter roughly 8000 times the distance between the Earth and the sun.

“The position and brightness of the remains match an entry from 48 BC in an ancient collection of observations by Chinese astronomers,” says Göttgens.

“They probably saw the original nova in the same place.”

The research is soon to be published in the journal Astronomy & Astrophysics. A version is available on the preprint server arXiv.