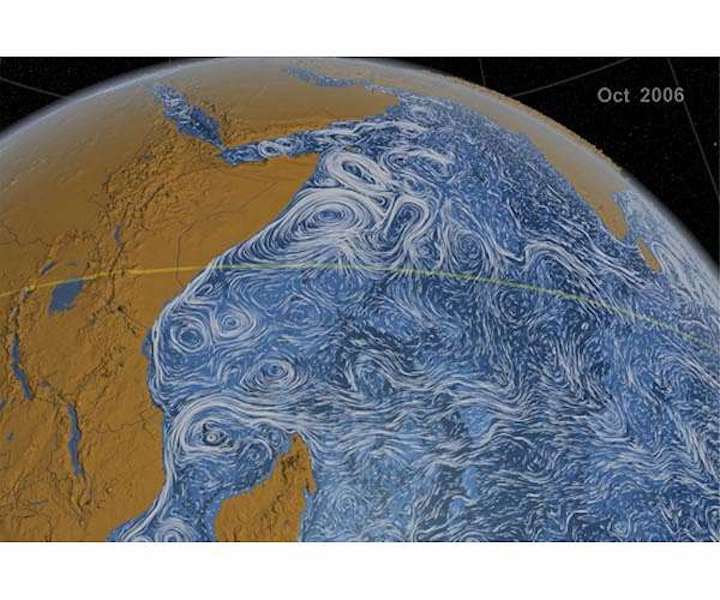 Researchers have found a new way to use satellites to monitor the Great Whirl, a massive whirlpool the size of Colorado that forms each year off the coast of East Africa, shown here in a visualization of ocean currents in the Indian Ocean.

Researchers have found a new way to use satellites to monitor the Great Whirl, a massive whirlpool the size of Colorado that forms each year off the coast of East Africa, they report in a new study.

Using 23 years of satellite data, the new findings show the Great Whirl is larger and longer-lived than scientists previously thought. At its peak, the giant whirlpool is, on average, 275,000 square kilometers (106,000 square miles) in area and persists for about 200 days out of the year. Watch an animation of the Great Whirl's evolution here.

More than being just a curiosity, the Great Whirl is closely connected to the monsoon that drives the rainy season in India. Monsoon rains fuel India's $2 trillion agricultural economy, but how much rain falls each year is notoriously difficult to forecast. If researchers can use their new method to discern a pattern in the Great Whirl's formation, they might be able to better predict when India will have a very dry or very wet season compared to the average.

"If we're about to connect these two, we might have an advantage in predicting the strength of the monsoon, which has huge socioeconomic impacts," said Bryce Melzer, a satellite oceanographer at Stennis Space Center in Mississippi and lead author of the new study in AGU's journal Geophysical Research Letters.

According to Findlay, Lieutenant Taylor of the British Royal Navy described a "great whirl of current" circulating clockwise at about the same latitude at Xaafuun, Somalia. "A very heavy confused sea is created by this whirl," Findlay wrote. The phenomenon became known as the Great Whirl, and sailors have long been wary of its strong waves and intense currents.

The Great Whirl starts to form in April but its currents are deepest and strongest from June to September, during the official Indian monsoon season. A 2013 study using satellite data found that at its peak, the Whirl can grow to more than 500 kilometers (300 miles) wide, making it wider than the Grand Canyon is long.

The Great Whirl's circular currents extend hundreds of meters downward and can go farther than 1 kilometer (0.6 miles) deep in some areas. The inertia it generates keeps the Whirl going well past the end of monsoon season in September, until typically disappearing late in the fall.

Studying the Whirl from afar
Scientists have been interested in the Great Whirl for years but have had difficulty studying it directly. Monitoring the Whirl requires many repeat observations taken over a long period of time, but rampant piracy off the Somali coast has prevented researchers from venturing near it or placing instruments in the ocean to observe it.

And because the Whirl is so large, it doesn't behave the way smaller whirlpools do, and scientists have difficulty defining its boundaries. As a result, scientists don't fully understand how the Whirl varies from year to year or exactly when it forms and when it disappears.

Researchers have recently turned to satellites to see if they can monitor the Whirl from afar. In the new study, Melzer and his colleagues developed a new way to use satellite measurements of sea levels to better define the Great Whirl's boundaries and track it over time. The center of the Great Whirl actually rises higher than sea level and the currents spin around this "hill" of water.

The researchers analyzed sea level satellite data from 1993-2015 to understand how the Whirl changes from year to year and what it looks like under different climate conditions.

They found the Great Whirl is larger than previous thought. The average size of the Whirl over those 23 years was 275,000 square kilometers (106,000 square miles), making it larger than the state of Colorado.

They also found there's a lot of variability in when the Great Whirl forms and how long it lasts. But on average, it lasts for 198 days - six and a half months - considerably longer than previous estimates of 166 and 140 days.

The vast amount of inertia it generates keeps the Whirl spinning well past the official end of monsoon season in September. The researchers found the Whirl persists well into November and even December, and there were three years - 2000, 2005, and 2010 - when it persisted into the new year. The longest it lasted was 256 days - more than eight months - in 1997.

The researchers haven't yet found a pattern in the Great Whirl that could help them predict the Indian monsoon. But they hope to also apply their method to tracking whirlpools in other areas. Whirlpools in the Gulf of Mexico, for example, have very strong currents that could affect oil drilling operations in the area.