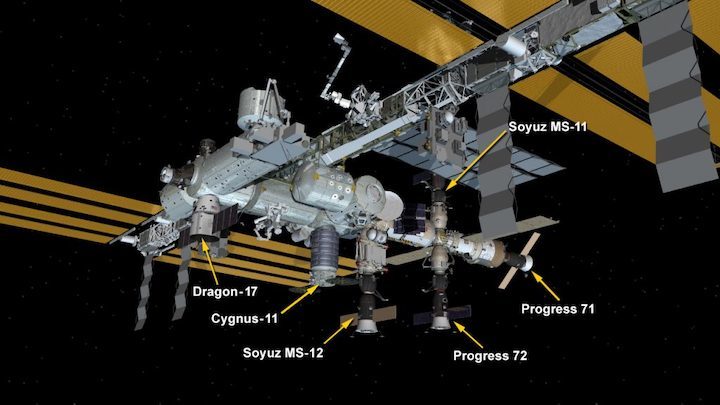 Two days after its launch from Florida, the SpaceX Dragon cargo spacecraft was installed on the Earth-facing side of the International Space Station’s Harmony module at 9:32 a.m. EDT.

The 17th contracted commercial resupply mission from SpaceX (CRS-17) delivers more than 5,500 pounds of research, crew supplies and hardware to the orbiting laboratory.

Here’s some of the science arriving at station:

Scientists are using a new technology called tissue chips, which could help predict the effectiveness of potential medicines in humans. Fluid that mimics blood can be passed through the chip to simulate blood flow, and can include drugs or toxins. In microgravity, changes occur in human health and human cells that resemble accelerated aging and disease processes. This investigation allows scientists to make observations over the course of a few weeks in microgravity rather than the months it would take in a laboratory on Earth.

The Hermes facility allows scientists to study the dusty, fragmented debris covering asteroids and moons, called regolith. Once installed by astronauts on the space station, scientists will be able to take over the experiment from Earth to study how regolith particles behave in response to long-duration exposure to microgravity, including changes to pressure, temperate and shocks from impacts and other forces. The investigations will provide insight into the formation and behavior of asteroids, comets, impact dynamics and planetary evolution.

These are just a few of the hundreds of investigations that will help us learn how to keep astronauts healthy during long-duration space travel and demonstrate technologies for future human and robotic exploration beyond low-Earth orbit to the Moon and Mars. Space station research also provides opportunities for other U.S. government agencies, private industry, and academic and research institutions to conduct microgravity research that leads to new technologies, medical treatments, and products that improve life on Earth.

After Dragon spends approximately one month attached to the space station, the spacecraft will return to Earth with about XX pounds of cargo and research.

SpaceX Dragon installed at ISS after launch from Cape Canaveral 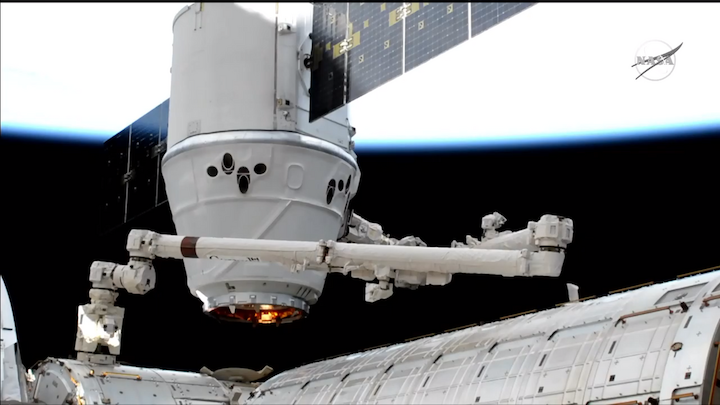 Astronauts pull SpaceX's Dragon spacecraft closer to the International Space Station using a robotic arm ahead of the capsule's installation Monday, May 6, 2019.
NASA

After launching from Cape Canaveral over the weekend, a SpaceX Dragon capsule packed with thousands of pounds of supplies arrived at the International Space Station Monday, kicking off the work week for the outpost's six-person crew.

At 9:32 a.m. Eastern time, astronauts using the station's robotic arm installed the previously flown capsule, setting the stage for its unloading over the next few weeks. Launch Complex 40 hosted its departure on a Falcon 9 rocket at 2:48 a.m. Saturday with more than 5,500 pounds of supplies, cargo and science experiments.

After astronauts unpack and re-pack the spacecraft with experiments for return to Earth, Dragon will target a Pacific Ocean splashdown in the first week of June. This particular capsule previously flew on SpaceX's 12th resupply mission to the ISS in August 2017.

Teams back on the ground, meanwhile, are targeting no earlier than mid-May for the launch of a Falcon 9 rocket from Cape Canaveral Air Force Station with SpaceX-built Starlink communications satellites. The company last year secured permission from the Federal Communications Commission to begin operating its internet-beaming constellation that is planned to include 11,000 satellites in low-Earth orbit.

Until then, the Air Force's 45th Space Wing will be performing routine maintenance on the Eastern Range, known as a re-capitalization period.