Dust is not just a household nuisance; it’s a planetary one, particularly on Mars. Before astronauts visit the Red Planet, we need to understand how the dust particles that often fill the atmosphere could impact them and their equipment.

The global Martian dust storm of summer 2018 — the one that blotted out sunlight for weeks and put NASA’s beloved Opportunity rover out of business — offered an unprecedented learning opportunity. For the first time, humans had eight spacecraft orbiting Mars or roving its surface — the largest cadre of robotic explorers ever to watch a global dust storm unfold.

Images showing the advancing, global dust storm, taken by Curiosity's Mast Camera between Sol 2075 and Sol 2170 on Mars, which would've fallen between June 8, 2018, and Sept. 13, 2018, on Earth.
Credits: NASA/JPL-Caltech/York University

Scientists around the globe are still analyzing reams of data, but preliminary reports include insights on how massive dust storms could have affected ancient Martian water, winds, and climate, and how they could affect future weather and solar power.

Martian dust storms are common, especially during southern hemisphere spring and summer. They tend to last a couple of days and can cover regions of the planet the size of the United States. But planet-encircling ones are unpredictable, sometimes lingering for months. Why? “We still don’t know what drives the variability, but the 2018 storm gives another data point,” says Scott Guzewich, an atmospheric scientist at NASA’s Goddard Space Flight Center in Greenbelt, Maryland, who’s a lead in NASA’s dust storm investigation.

Here are a few things we saw from space and from the ground during the recent global dust storm that helped address some open questions and exposed new ones:

Could global dust storms have blown away the planet’s water?

Scientists have found loads of evidence that Mars had rivers, lakes and maybe even oceans of water billions of years ago. Dry riverbeds, ancient shorelines, and salty surface chemistry are all clues. But why did much of the water disappear? And how? “The global dust storm may give us an explanation,” says Geronimo Villanueva, a Martian water expert at NASA Goddard.

Villanueva worked with colleagues at the ESA (European Space Agency) and Russia’s Roscosmos space agency to confirm that powerful, global dust storms appear to loft water vapor from its typical altitude of 12 miles (20 kilometers) above the Martian surface to much higher elevations of at least 50 miles (80 kilometers). NASA's Mars Reconnaissance Orbiter observed a similar phenomenon in 2007.

By thrusting water into the upper atmosphere, global dust storms may interfere with the planet’s water cycle, preventing H2O from condensing and falling back down to the surface. On Earth, H2O falls back down as rain or snow. The same process could have existed on Mars billions of years ago.

At higher altitudes, where the Martian atmosphere is especially tenuous, solar radiation can easily penetrate to break up the water molecules and blow their component elements into space, Villanueva and his colleagues speculate. “When you bring water to higher parts of the atmosphere, it gets blown away so much easier,” says Villanueva, who has spent his career piecing together the history of water on Mars.

Villanueva and his colleagues reported on April 10 in the journal Nature that they found evidence of receding water vapor by using the ExoMars Trace Gas Orbiter at Mars, a spacecraft managed by ESA and Roscosmos. The orbiter measured water molecules at different altitudes before and after the 2018 storm. Scientists saw for the first time that all types of water molecules (there are lighter and heavier ones) reached the “escape region” of the upper atmosphere, which was an important insight into how water may be disappearing from Mars. Now, says Villanueva​, scientists will have to take this new information into account in their predictions about how much water flowed on ancient Mars and how long it took for it to disappear. 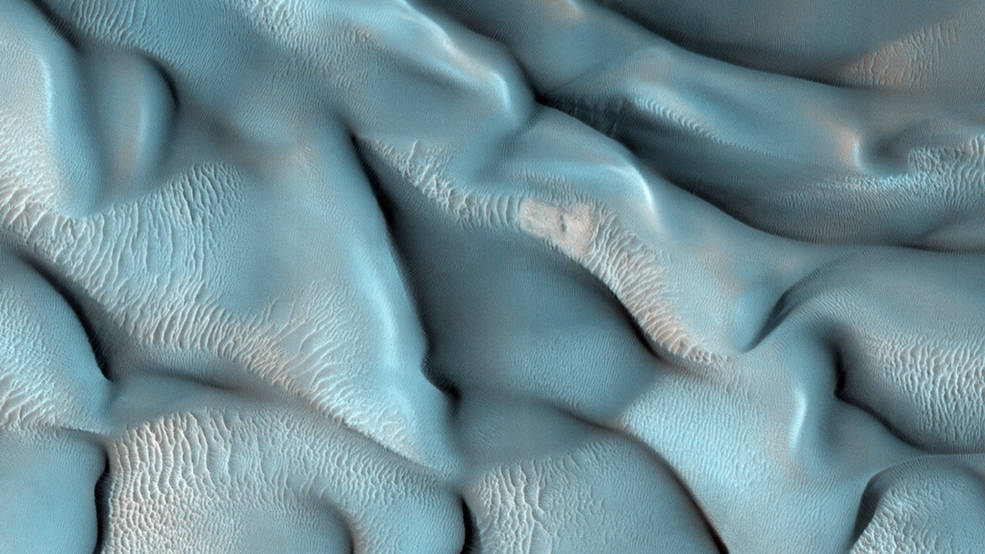 The surface of Mars is covered by constantly shifting sand blown by the planet’s winds. This creates an ever-evolving desert landscape with diverse and striking dunes. Loose mounds of sand are found all over Mars, ranging in height from a few dozen feet to higher than some of Earth’s tallest skyscrapers. Images taken by the HiRISE instrument aboard NASA’s Mars Reconnaissance Orbiter spacecraft have allowed scientists to study Mars’ dunes in unprecedented detail. The enhanced-color views captured from orbit reveal characteristics of their shape, composition, and movements over time, giving clues about the planet’s dynamic atmosphere and current climate.
Credits: NASA/JPL/University of Arizona
Martian dunes

For scientists who track sand dunes shift inches across the surface, the global dust storm offered critical evidence in their investigation of wind patterns on the Red Planet. Only the forceful winds during a global dust storm would be able to move the planet’s extensive dunes, scientists once thought, given that Mars’ super thin atmosphere makes 100-mile-per-hour wind feel like a breeze. Yet images from orbiters and landers throughout the decades have revealed that Martian sand moves all the time, implying that it doesn’t need strong gusts to do so. This was a surprise to researchers.

Now that scientists finally got to watch a global dust storm from the ground through the eyes of NASA’s Curiosity rover, they noticed another surprising characteristic of Martian wind: strong gusts don’t appear to move sand more than normal. “This has added to the overall mystery of how wind behaves on Mars,” says Mariah Baker, a Ph.D. student at Johns Hopkins University in Baltimore, Maryland, who helps track changes in Martian sand ripples

Ongoing analysis of the entire Martian globe will reveal whether Gale Crater, where Curiosity is roving, was unique. The heart of the storm was over Opportunity, after all, which was roving on the other side of the globe from Curiosity. Plus, wind may behave differently inside Gale Crater, scientists note. “Were we being sheltered?” Guzewich says. “That’s possible.”

If it turns out sand dunes didn’t shift much anywhere on Mars during the storm, there could be a good reason, Baker says: “Winds swirling dust around in the atmosphere might not be the same thing as winds on the surface.” Some scientists think that when dust gets lifted into the atmosphere during a global storm, blocking sunlight from reaching the surface, it shuts down the wind-generating process close to the ground that, under normal conditions, is induced by temperature fluctuations between the air and surface.

Whatever the reason turns out to be, understanding the behavior of sand dunes today helps us reveal Mars’s ancient climate, says Baker: “We can look at wind-shaped sandstones on the surface and look at dunes that are moving now, and say, ‘OK, what does that say about the conditions that were here billions of years ago when these dunes were moving and now are cemented into the rock record?’”

Navigation cameras aboard NASA's Curiosity Mars rover observed several whirlwinds carrying Martian dust across Gale Crater in 2017. Dust devils result from sunshine warming the ground, prompting convective rising of air. All the dust devils were seen in a southward direction from the rover. Timing is accelerated and contrast has been modified to make frame-to-frame changes easier to see.
Credits: NASA/JPL-Caltech/TAMU

Dust devils, which are rotating columns of air and dust, are common on Mars. They form when hot air from the surface rises, creating a current of air that forms a whirlwind. These devils are useful for cleaning off dust from the panels of solar-powered spacecraft, like InSight, as they pass over them. Thus, it’s important to understand how often they occur.

Curiosity is powered by a nuclear battery, which allowed it to collect data while Opportunity hibernated, with minimal sunlight reaching its solar panels. Through Curiosity, we learned that dust devils disappear during a dust storm, right when we need them most, and for months afterwards. This happens because of an interruption in the same wind-generating process that might affect the movement of sand dunes.

Guzewich says that understanding a global storm’s impact on dust devils is important in planning how to power equipment during future Mars missions: “You need to be prepared to go a while before your next dust devil passes over and cleans you off.”

Banner image: This animated image blinks two versions of a May 11, 2016, selfie of NASA's Curiosity Mars rover at a drilled sample site called "Okoruso." In one version, cameras atop the rover's mast face the arm-mounted camera taking the portrait. In the other, they face away. Credit: NASA/JPL-Caltech/MSSS