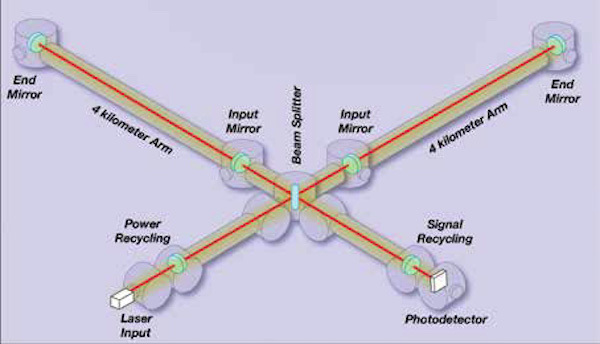 Gravitational waves from the merger of a black hole and a neutron star may have been detected for the first time. That is the claim of scientists working on the LIGO and Virgo observatories, who have reported seeing five possible gravitational-wave signals since the upgraded detectors switched-on on 1 April 2019.

Speaking at a press conference today, representatives of the team said that they were also investigating whether a neutron-star merger was detected in April. If confirmed, this would be the second such event observed by LIGO and Virgo. The three other potential events are of merging pairs of black holes. Electromagnetic radiation was not detected from any of the five potential events.

LIGO first hit the headlines in February 2016, when scientists announced that the two interferometers – each with 4 km-long arms – had made the first-ever detection of gravitational waves. That signal came from the merger of two black holes and since then the observatories – located in Louisiana and the state of Washington – have spotted nine more black-hole mergers.

The Virgo gravitational-wave detector is in Italy and an upgraded version of the observatory joined the hunt in 2017 – just in time to take part in the first-ever detection of gravitational waves from the merger of two neutron stars. Unlike previous gravitational-wave detections, which were not accompanied by electromagnetic signals, the neutron-star merger was observed by a number of telescopes over a wide spectrum from radio waves to gamma rays. This was the first (and so far, only) multimessenger astronomy observation that includes gravitational waves and provided a wealth of new information about what happens when neutron stars merge to create a black hole.

Shortly after the neutron-star detection, LIGO and Virgo shutdown for an upgrade before resuming their search for gravitational waves on 1 April. The potential neutron-star merger was spotted on 25 April and is believed to have occurred about 500 million light-years from Earth. Scientists had anticipated that the upgrade of the detectors would allow them to detect as many as one such merger per month, which seems to be confirmed by this detection. This was followed swiftly on 26 April by a possible signal from a black-hole–neutron-star merger, which appears to have occurred 1.2 billion light-years away. Scientists are still working to confirm the origins of these two events.

In both cases, telescopes worldwide looked for the electromagnetic radiation that is expected to be produced by mergers involving neutron stars – but so far, nothing has been seen. This could be because both events were much more distant that the 2018 neutron-star merger, which was 130 million light-years away. Also, one of  LIGO detectors was not running when the events were seen, which means that the LIGO–Virgo team was limited in its ability to tell astronomers where in the sky to look for the signals. Having three detectors spread out across the globe allows LIGO–Virgo scientists to give astronomers a pretty good idea of where to look in the sky for electromagnetic signals. Towards the end of this observing run, which will end in March 2020, a detector called KAGRA  will come on line in Japan. Having four detectors running should allow sources to be better pinpointed in the sky.

Giovanni Prodi, who is Virgo data analysis coordinator at the University of Trento in Italy, described April as an “incomparable scientific month”. Patrick Brady, spokesperson for the LIGO Scientific Collaboration and a professor of physics at the University of Wisconsin-Milwaukee, says that we are “just beginning to see the field of gravitational-wave astronomy open.”

Other events that could be spotted by the detectors include a supernova explosion within the Milky Way, which has the potential to be detected along with neutrinos and electromagnetic radiation.