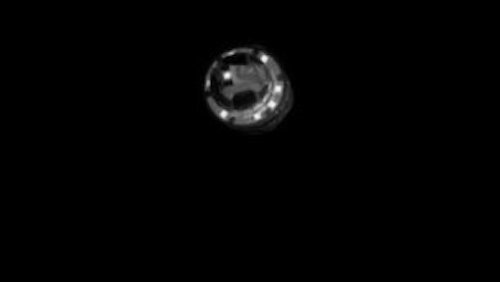 Incoming asteroids have been scarring our home planet for billions of years. This month humankind left our own mark on an asteroid for the first time: Japan’s Hayabusa2spacecraft dropped a copper projectile at very high speed in an attempt to form a crater on asteroid Ryugu. A much bigger asteroid impact is planned for the coming decade, involving an international double-spacecraft mission.

On 5 April, Hayabusa2 released an experiment called the ‘Small Carry-on Impactor’ or SCI for short, carrying a plastic explosive charge that shot a 2.5-kg copper projectile at the surface of the 900-m diameter Ryugu asteroid at a velocity of around 2 km per second. The objective is to uncover subsurface material to be brought back to Earth for detailed analysis.

“We are expecting it to form a distinctive crater,” comments Patrick Michel, CNRS Director of Research of France’s Côte d'Azur Observatory, serving as co-investigator and interdisciplinary scientist on the Japanese mission. “But we don’t know for sure yet, because Hayabusa2 was moved around to the other side of Ryugu, for maximum safety. “The asteroid’s low gravity means it has an escape velocity of a few tens of centimetres per second, so most of the material ejected by the impact would have gone straight out to space. But at the same time it is possible that lower-velocity ejecta might have gone into orbit around Ryugu and might pose a danger to the Hayabusa2 spacecraft.

“So the plan is to wait until this Thursday, 25 April, to go back and image the crater. We expect that very small fragments will meanwhile have their orbits disrupted by solar radiation pressure – the slow but persistent push of sunlight itself. In the meantime we’ve also been downloading images from a camera called DCAM3 that accompanied the SCI payload to see if it caught a glimpse of the crater and the early ejecta evolution.” According to simulations, the crater is predicted to have a roughly 2 m diameter, although the modelling of impacts in such a low-gravity environment is extremely challenging. It should appear darker than the surrounding surface, based on a February touch-and-go sampling operation when Hayabusa2’s thrusters dislodged surface dust to expose blacker material underneath.

“For us this is an exciting first data point to compare with simulations,” adds Patrick, “but we have a much larger impact to look forward to in future, as part of the forthcoming double-spacecraft Asteroid Impact & Deflection Assessment (AIDA) mission. “In late 2022 the US Double Asteroid Redirect Test or DART spacecraft will crash into the smaller of the two Didymos asteroids. As with Hayabusa2’s SCI test it should form a very distinct crater and expose subsurface material in an even lower gravity environment, but its main purpose is to actually divert the orbit of the 160 m diameter ‘Didymoon’ asteroid in a measurable way.”

The DART spacecraft will have a mass of 550 kg, and will strike Didymoon at 6 km/s. Striking an asteroid five times smaller with a spacecraft more than 200 times larger and moving three times faster should deliver sufficient impact energy to achieve the first ever asteroid deflection experiment for planetary defence.

A proposed ESA mission called Hera would then visit Didymos to survey the diverted asteroid, measure its mass and perform high-resolution mapping of the crater left by the DART impact. “These scaling laws are also crucial on a practical basis, because they underpin how our calculations estimating the efficiency of asteroid deflection are made, taking account the properties of the asteroid material as well as the impact velocity involved.

“This is why Hera is so important; not only will we have DART’s full-scale test of asteroid deflection in space, but also Hera’s detailed follow-up survey to discover Didymoon’s composition and structure. Hera will also record the precise shape of the DART crater, right down to centimetre scale. Infrared imaging of the impact crater

“So, building on this Hayabusa2 impact experiment, DART and Hera between them will go on to close the gap in asteroid deflection techniques, bringing us to a point where such a method might be used for real.”

Didymoon will also be by far the smallest asteroid ever explored, so will offer insights into the cohesion of material in an environment whose gravity is more than a million times weaker than our own – an alien situation extremely challenging to simulate. In 2004, NASA’s Deep Impact spacecraft launched an impactor into comet Tempel 1. The body was subsequently revisited, but the artificial crater was hard to pinpoint – largely because the comet had flown close to the Sun in the meantime, and its heating would have modified the surface.

Hera will visit Didymoon around four years after DART’s impact, but because it is an inactive asteroid in deep space, no such modification will occur. “The crater will still be ‘fresh’ for Hera,” Patrick concludes.