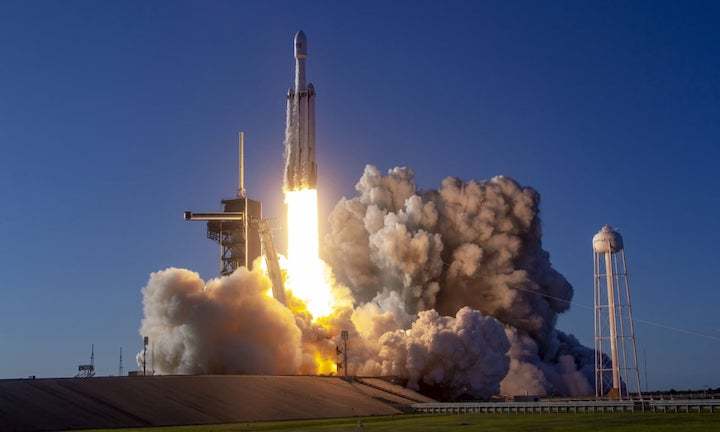 President Donald Trump has struggled with some of his signature policy promises, but now he has set his sights higher: a return to the moon, five decades after humans last set foot there.

The White House has spoken of landing the first woman on the moon within five years and Trump’s vice-president, Mike Pence, has made it clear that the private sector – much of it backed by a handful of billionaires – could play a big part in the plans.

Trump’s extraterrestrial ambitions are probably spurred by rather more down-to-earth concerns: his desire for attention-grabbing headlines and an ambition to stay ahead of geopolitical rivals. China, Trump’s main perceived trade rival, landed a rover on the far side of the moon in January, while the US has had to rely on Russia to take its astronauts into space.

But a new US government moonshot would be a big boost to the already burgeoning private space industry, which is forecast to triple in scale over the next 20 years.

Analysts at investment bank UBS expect the space business to be worth nearly $1 trillion (£770bn) a year – roughly equivalent to the GDP of Indonesia, the 16th biggest economy in the world – within the next two decades, up from $340bn currently.

Felix Tran, an analyst at Bank of America Merrill Lynch, reckons “Space Race 2.0” will make the industry worth $2.7tn by 2045. And the US government’s commitment, he says, will provide an important boost to private investors’ sentiment.

The private sector has already taken on a much bigger share of work in space, including rocket launches traditionally confined to state agencies such as Nasa. And they have a keen focus on reducing costs.

Earlier this month, SpaceX, the firm founded by the serial tech entrepreneur and founder of Tesla, Elon Musk, completed the first full commercial launch of its Falcon Heavy rocket. Aside from being the world’s most powerful operational rocket (it has 27 engines and carried a Saudi Arabian communications satellite into orbit, after carrying a Tesla car into space on its debut last year), the Falcon Heavy’s main attraction is the cost advantage provided by its reusable rockets, which can land back on Earth in one piece.

That, at least, is the theory, although the central core of the Falcon, which successfully landed upright on a drone ship off the Florida coast, then toppled over in rough seas.

Nasa, however, seems willing to outsource operations to SpaceX. Last week it hired the company for a venture that bears more than a passing resemblance to the Bruce Willis film Armageddon – firing a rocket into an asteroid to see if it might be possible to deflect one headed for Earth.

Other rocket companies are pursuing a similar approach to cutting costly waste. Blue Origin, owned by Amazon’s billionaire founder, Jeff Bezos, is aiming to produce a rocket with twice the capacity of any other existing launch vehicle.

Stratolaunch, founded by the late Paul Allen, co-founder of Microsoft, successfully flew the world’s largest ever aircraft last weekend, with the ultimate aim of using it to carry rockets high into the atmosphere. And US companies Boeing and Lockheed have a venture with the US government to produce a vehicle that can carry heavy payloads, and is aiming for its first rocket launch in 2021.

The UK is involved in the “new space race”, says Mark Thomas, chief executive of Oxfordshire-based Reaction Engines. His company, backed by BAE, Boeing and Rolls-Royce, is developing its Sabre engine, which it hopes will be capable of pushing a spaceplane to Mach 5.4 in the atmosphere and then to Mach 25 in rocket mode, using an onboard oxidiser, for space flight. (Such speeds could also revolutionise air travel: Concorde’s top speed was about Mach 2.)

Reaction tested its key cooling technology at Mach 3 temperatures this month, and plans to test its core system next year. If all goes to plan. Thomas says, its test system could be flying by 2025. Reaction forecasts it could reduce the cost of launches from $60m to just $6m, enabling much greater human activity in space.

“If you’re going to get people seriously off the planet – and that’s an ‘if’ – you’re going to need some serious infrastructure in space,” says Thomas. “It does all say you need more routine, reliable access to space.”

With falling costs come other opportunities. Satellites and related services still comprise the bulk of the space industry – 77%, according to Bank of America Merrill Lynch – but it is space tourism which has captured the imagination of many.

Separate UBS research predicts space tourism will generate $3bn by 2030. In January, Sir Richard Branson said he expected to make his first journey into space “in the middle of this year” on a Virgin Galactic flight. Bezos and Musk are planning crewed flights within a year.

The British billionaire has made several similar promises in the past: he initially promised space flights 12 years ago, with the aim of getting passengers into space by 2010. However, this time might be different. In February, Virgin Galactic’s SpaceShipTwo, with two pilots on board, reached 55.87 miles above sea level – above the 50-mile mark used by Nasa to mark where space starts. Eventually Virgin Galactic hopes to be taking six passengers at a time for joyrides on the edge of space, and has taken deposits from 700 people – some of whom have already been waiting for years – on tickets priced at up to $250,000.

As launches become cheaper, another group of entrepreneurs are already making plans for the next step: space hotels. Robert Bigelow, the founder of hotel chain Budget Suites of America, attached an inflatable living module to the International Space Station in 2016, and the company now has ambitions for a full commercial space station accommodating first scientists and then paying customers.

Yet for all these recent developments, which appear to herald a new, cheaper space age, UBS warns that anything approaching mass-market travel to space remains some way off. As it reminded its clients: “This is still rocket science.”