After decades of searching, astronomers have definitively detected helium hydride, the first  molecule to form in the early universe. 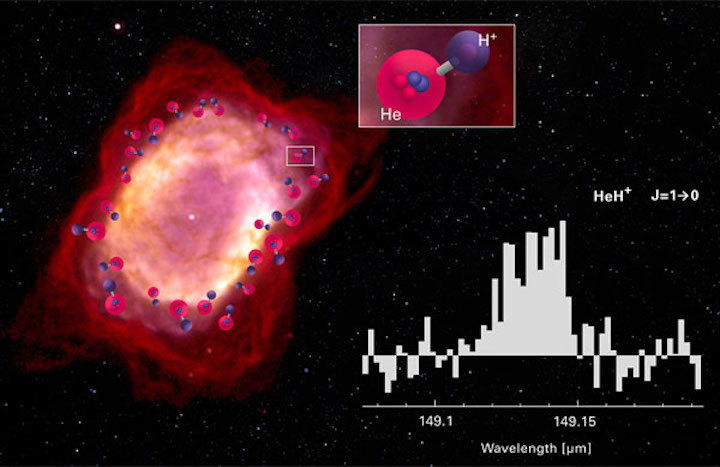 A team of astronomers and a high-flying observatory have finally found the helium hydride ion— the first molecule to come together in the cosmos — in nearby interstellar space.

Back when the universe was in its infancy, its soup of matter and radiation was too hot to allow the formation of anything like the atoms and molecules that make up the world around us today. Only once the universe turned some 380,000 years old had it cooled enough for protons and neutrons to combine into atoms. (Even then, it remained pretty hot at 4000K, not quite as scalding as the Sun’s visible surface.) Then atoms combined into molecules.

Given that the universe was largely hydrogen and helium at this time, it’s perhaps no surprise that the universe’s first molecule was the helium hydride ion (HeH+). Well, maybe a little bit of a surprise: Helium is among the notoriously unreactive “noble” elements. Put in physics-y terms, helium has the highest ionization energy (that is, the energy required to remove an electron) of all the elements, so it’s no easy feat to get it to combine with another atom.

Indeed, the ion didn’t survive long even in the unique conditions of the early universe. Nevertheless, it played a brief but important role: Helium hydride’s destruction gave rise to molecular hydrogen (H2), which eventually permeated galaxies and led to the first stars. The existence of helium hydride is thus instrumental to understanding the chemical evolution of the early universe.

Yet for years, astronomers tried — and failed — to detect it. First created in a lab in 1925, it’s rare in the universe at large because it’s so fragile. Astronomers in the 1970s realized they might find the molecule newly created in plasmas. One study looked at a distant quasar, another at nearby supernova 1987A, but no one turned up a definitive detection.

Recreating Conditions of the Early Universe

One site where helium hydride could form in quantity is around a low-mass star like the Sun that has collapsed into a white dwarf. In the process, the star puffs off its outer layers in a beautiful explosion called a planetary nebula, but it’s the interaction between the white dwarf and the gas around it that recreates conditions where helium hydride can survive long enough to be detected.

To check out a peanut-shaped planetary nebula named NGC 7027, Güsten and colleagues took to the skies, flying with the airborne Stratospheric Observatory for Infrared Astronomy (SOFIA) aboard a modified Boeing 747, which soars above the infrared-absorbing lower atmosphere. The newly formed white dwarf at the nebula's center is just 600 years old and still blazingly hot (190,000 K). It pours ultraviolet radiation into its surroundings, stripping electrons off of hydrogen and helium atoms alike. The spherical region where helium is ionized is slightly larger than where both hydrogen and helium are ionized, and it’s in this thin shell where ionized helium can bond to neutral hydrogen to make the helium hydride ion.

Using the German Receiver for Astronomy at Terahertz Frequencies (GREAT) instrument, Güsten and colleagues definitively detected radiation emitted by the helium hydride ion at 149.137 microns. The discovery does more than confirm HeH+ exists, the team also uses the detection to estimate how (and how fast) this molecule is formed and destroyed.

The chemistry of the universe began with this ion. Now, astronomers can rest assured that we understand at least this one small part of the early universe’s chemical evolution.