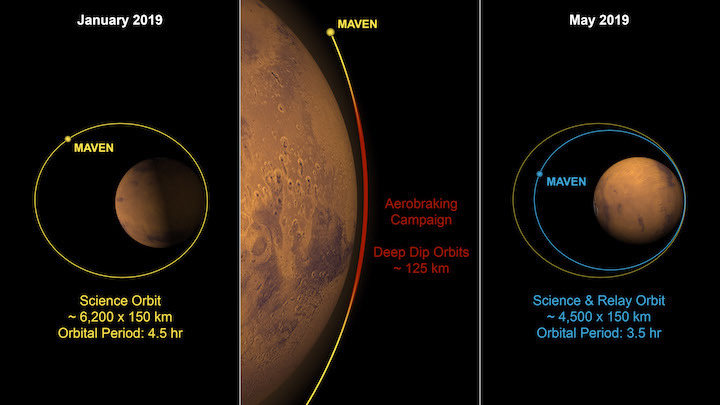 This graphic illustrates the aerobraking plan for MAVEN. At left is the current MAVEN orbit around Mars, with a 6,200-km highest altitude, and an orbit period of ~4.5 hours. The center panel shows the aerobraking process, during which MAVEN will perform a series of “deep dip” orbits approaching to within ~125 km of Mars at lowest altitude, causing drag from the atmosphere to slow down the spacecraft. Over roughly three-hundred and sixty orbits spanning about two months, this slowing reduces the spacecraft’s highest altitude to ~4500 km and its orbit period to ~3.5 hours. At right is the post-aerobraking orbit, with reduced altitude and shorter orbit period. (Courtesy NASA’s Scientific Visualization Studio/Kel Elkins and Dan Gallagher)

The 4-year-old atmosphere-sniffing MAVEN mission is embarking on a new campaign today to tighten its orbit around Mars. The operation will reduce the highest point of the MAVEN spacecraft’s elliptical orbit from 3,850 to 2,800 miles (6,200 to 4,500 kilometers) above the surface and prepare it to take on additional responsibility as a data-relay satellite for NASA’s Mars 2020 rover, which launches next year.

“The MAVEN spacecraft has done a phenomenal job teaching us how Mars lost its atmosphere and providing other important scientific insights on the evolution of the Martian climate,” said Jim Watzin, director of NASA’s Mars Exploration Program. “Now we’re recruiting it to help NASA communicate with our forthcoming Mars rover and its successors.”

While MAVEN’s new orbit will not be drastically shorter than its present orbit, even this small change will significantly improve its communications capabilities. “It’s like using your cell phone,” said Bruce Jakosky, MAVEN principal investigator from the University of Colorado Boulder. “The closer you are to a cell tower, the stronger your signal.”

A strong telecommunications antenna signal is not the only benefit of a tighter orbit. Coming in nearly 1,000 miles (about 1,500 kilometers) closer also will allow the MAVEN orbiter to circle Mars more frequently—6.8 orbits per Earth day versus 5.3 previously—and thus communicate with the Mars rovers more frequently. While not conducting relay communications, MAVEN will continue to study the structure and composition of the upper atmosphere of Mars. “We’re planning a vigorous science mission far into the future,” Jakosky said.

The MAVEN mission was designed to last two years in space, but the spacecraft is still operating normally. With the mission managing its fuel to last through 2030, NASA plans to use MAVEN’s relay capability as long as possible. The MAVEN orbiter carries an ultra high-frequency radio transceiver—similar to transceivers carried on other Mars orbiters—that allows it to relay data between Earth and rovers or landers on Mars. The MAVEN spacecraft already has served occasionally as NASA’s communication liaison with the Curiosity Rover.

Over the next few months, MAVEN engineers will use a navigation technique known as aerobraking—like applying the brakes on a car—to take advantage of the drag of the Red Planet’s upper atmosphere to slow the spacecraft down gradually, orbit by orbit. This is the same drag you would feel if you put your hand out of the window of a moving car.

Based on the tracking of the spacecraft by the navigation team at NASA’s Jet Propulsion Laboratory in Pasadena, Calif., and at Lockheed Martin in Littleton, Colo., engineers will begin carefully lowering the lowest part of the spacecraft’s orbit into the Martian upper atmosphere over the next couple of days by firing its thrusters. The spacecraft will circle Mars at this lower altitude about 360 times over the next 2.5 months, slowing down slightly with each pass through the atmosphere. While it may seem like a time-consuming process, aerobraking is the most efficient way to change the spacecraft’s trajectory, said Jakosky: “The effect is the same as if we fired our thrusters a little bit on every orbit, but this way, we use very little fuel.”

Fortunately, the team has ample experience operating the spacecraft at these lower altitudes. On nine previous occasions throughout the mission, MAVEN engineers have dipped the orbiter into the same altitude targets for aerobraking to take measurements of the Martian atmosphere. As a result of these “deep dips” and other measurements, NASA has learned that solar wind and radiation had stripped Mars of most of its atmosphere, changing the planet’s early climate from warm and wet to the dry environment we see today. MAVEN also discovered two new types of auroras on Mars and the presence of charged metal atoms in its upper atmosphere that tell us that a lot of debris is hitting Mars that may affect its climate.

MAVEN’s principal investigator is based at the University of Colorado’s Laboratory for Atmospheric and Space Physics, Boulder. The university provided two science instruments and leads science operations, as well as education and public outreach, for the mission. NASA’s Goddard Space Flight Center in Greenbelt, Maryland, manages the MAVEN project and provided two science instruments for the mission. Lockheed Martin built the spacecraft and is responsible for mission operations. The University of California at Berkeley’s Space Sciences Laboratory also provided four science instruments for the mission. NASA’s Jet Propulsion Laboratory in Pasadena, California, provides navigation and Deep Space Network support, as well as the Electra telecommunications relay hardware and operations.

MAVEN has achieved a tighter orbit around Mars to act as a telecommunications relay. The two-month campaign began February 11 and ended April 5.

MAVEN’s navigation team slowed the spacecraft down gradually by aerobraking, a process taking advantage of the Martian upper atmosphere to place a small amount of drag on the spacecraft.

“It’s like applying the brakes on a car but instead of brake pads, we used Mars’ atmosphere,” said Stuart Demcak navigation team lead at NASA’s Jet Propulsion Laboratory in Pasadena, California.

During this time, the spacecraft periapsis altitude (lowest altitude of the orbit) lowered from 151 km (94 miles) to about 132 km (82 miles) above the Martian surface. At this altitude, the atmosphere, although extremely thin, is dense enough to provide the small amount of drag on the spacecraft necessary to slow it down. The apoapsis altitude (highest point in orbit) dropped from about 6050 to about 4570 km, an orbit change that improves MAVEN’s availability to support relay communications with NASA’s landers and rovers on the surface of Mars. The orbit period dropped from 4.4 hours to roughly 3.7 hours.

“The team worked diligently to prepare for aerobraking and we are enjoying the benefits of those countless hours now” said Nick Sealy, spacecraft aerobraking phase lead
from Lockheed Martin Space in Littleton, Colorado. “This team made aerobraking look easy.”

While not conducting relay communications, MAVEN will continue to study the structure and composition of the upper atmosphere of Mars. MAVEN has enough fuel to operate until at least 2030.