Some initial effects of long-term spaceflight ebbed in the months after astronaut Scott Kelly returned to Earth. 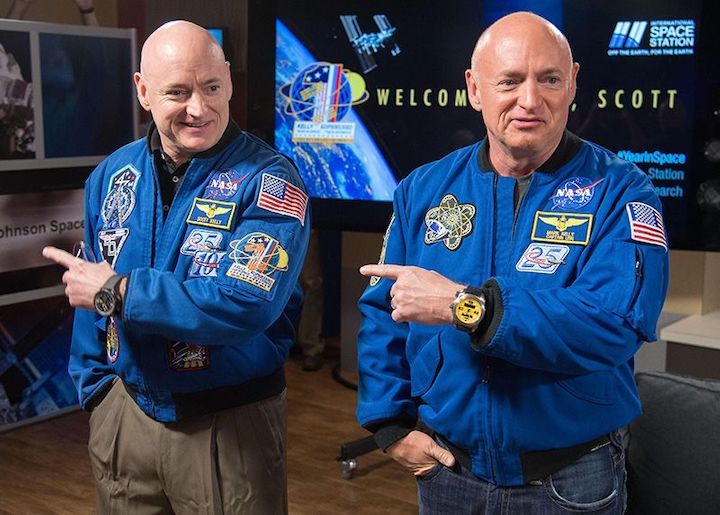 NASA’s identical-twin astronauts, Scott and Mark Kelly, are back to being nearly identical. That’s the verdict of a study that tracked how Scott’s body changed during a nearly year-long spaceflight in 2015-16, while Mark stayed on Earth. Many of the genetic, biochemical and other changes that had affected Scott mostly disappeared once he returned from space, researchers reported on 11 April in Science1.

Because the study involves just two people, the findings are not likely to be broadly applicable to other astronauts. But NASA hopes to use the information to guide future studies of astronaut health, including planned experiments that would involve flying three groups of ten astronauts into space for intervals of one year, six months and two to three months, respectively.

The agency is also working to return astronauts to the Moon’s surface by 2024, a goal announced last month by President Donald Trump's administration. Understanding how the human body responds to spaceflight over the long term will be crucial to keeping those astronauts healthy.

“The administration’s desire to move forward has put some more urgency into [NASA’s] basic life-sciences programme to try to understand these things as quickly as possible,” says Stuart Lee, who studies astronaut physiology at the contracting firm KBRwyle in Houston, Texas.

For decades, researchers have studied how the low-gravity, high-radiation space environment affects the human body. With Scott and Mark Kelly, NASA had an unprecedented chance to compare two people who share nearly the same genetic information and similar life experiences. Scott flew for 340 consecutive days on the International Space Station during the study, and has a lifetime total of 520 days in space. Mark has flown in space for 54 days, spread over four relatively short space-shuttle flights.

For 25 months, ten research teams subjected the twins to a battery of tests, including taking samples of blood, urine and faeces before, during and after the spaceflight. “The twins study is the most comprehensive view we’ve ever had of the response of the human body to spaceflight,” says Susan Bailey, a radiation cancer biologist at Colorado State University in Fort Collins. Mark ate, drank and did whatever he wanted, whereas Scott was subject to a strict diet and exercise regime aboard the space station.

Scott’s body experienced a number of changes that mostly reversed themselves once he returned to Earth. They included alterations in gene markers linked to stress, perhaps because of the switch in environment, says Andrew Feinberg, a geneticist at the Johns Hopkins University School of Medicine in Baltimore, Maryland.

One genetic change that did largely persist six months after Scott returned to Earth affected his chromosomes. Parts of them inverted, or flipped end-to-end. That leads to DNA damage and might be linked to the high amounts of radiation he experienced while in space.

Many of the caps at the ends of Scott’s chromosomes, called telomeres, also mysteriously lengthened during spaceflight, says Bailey. That’s the opposite of what she had expected, because telomeres shorten with age, and spaceflight stresses the body in much the same way as ageing does. Scott’s telomeres shortened within 48 hours of his return to Earth and are mostly back to their pre-flight lengths, although he does have more short telomeres now than before the flight. That could increase his risk of cardiovascular disease or certain types of cancer, Bailey says.

The Kellys are both retired from NASA. Scott has been writing and speaking about his time in space. Mark is running to represent Arizona in the US Senate, in an election that will take place next year.