All future predictions had to be based on just seven weeks of high-quality data. 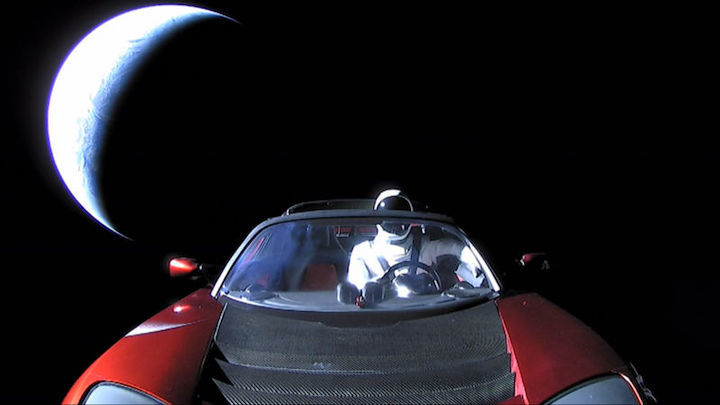 A little more than a year ago, SpaceX launched Elon Musk’s personal Tesla Roadster, complete with a mannequin nicknamed Starman, wearing a SpaceX Dragon spacesuit. About six hours later, the Falcon Heavy rocket's upper stage fired for a final time, sending Starman into an orbit around the Sun, with an aphelion just beyond the orbit of Mars. Since then I, and others, have wondered what the long-term fate of Starman will be.

At first, not much was known about the Tesla's location. The first inkling of its orbital parameters came from an image that Musk tweeted. (Later, this turned out to be inaccurate). The first verified and publicly available location data came from the Joint Space Operations Center (JSpOC), the US Air Force command tasked with tracking objects in space. But this only covered the time it was in Earth orbit, not Starman's position after the final upper-stage burn. Using those two pieces of information, on February 7, I created a website that allowed a person to see how far away the Tesla was from Earth. But this data was quite limited at first.

The next bit of information came from JPL Horizons, a tool produced by JPL’s Solar System Dynamics organization that is tasked with tracking objects in the Solar System. On February 8, it used data provided directly from SpaceX to allow one with proper knowledge to query the system and determine exactly where Starman was at any given time. This provided useful information for a few months, but beyond that time period, the data simply could not provide enough information.

Over the ensuing months, JPL received tracking data provided by optical telescopes that allowed it to refine the trajectory for Starman. Some people even used this early information to predict Starman’s long-term future; however, the data had a very short arc and was only really reliable for a few years at best. The best-known effort predicted that Starman would pass close to Earth in 2091 and resulted in a paper entitled “The Random Walk of Cars and Their Collision Probabilities with Planets." But that initial 2091 prediction was inaccurate because the tracking information relied on only a week’s worth of observational data.

JPL Horizons produced its final solution at the end of March 2019. This came after the last known telescope to observe Starman, a one-meter instrument at Las Cumbres Observatory near Sutherland, South Africa, did so on March 19, 2019. After that time, all future predictions had to be based on just seven weeks of high-quality data.

These predictions are made by taking the position in the sky of the observations and using that to fit a model of the orbital path around the Sun. With seven weeks of data, we can get a pretty good estimate of that path, and the current predictions have a calculated uncertainty of only a few kilometers. There are some consistent errors that show up when calculating such data, the most common being steady non-gravitational acceleration. This can be caused by the small, steady pressure of sunlight, differences in the temperature of different sides of the vehicle, and out-gassing. (Outgassing is an effect of sunlight boiling some of the non-metallic parts of the vehicle, which will cause a small pressure difference over time.)

The measurements that have been made of Starman show that it is being pushed slightly away from the Sun. The data should be very accurate for about 50 years, but as it has close passes with planets, particularly Earth, that uncertainty will grow considerably. After 100 years it will be much less reliable.

What we can say for now

The next time Starman will pass close to a planet will be to Mars on October 7, 2020. This will not be a particularly close pass; it will be about 4.6 million miles (7.4 million km) away from Mars. At that distance, Mars will appear only as a tiny dot, as seen in this simulation. This will not be enough to significantly alter the orbit of the Tesla.

There are many instruments at Mars—could any of them see Starman in 2020? The biggest telescope near Mars is the HiRISE instrument, which has occasionally imaged bright stars, and even Jupiter. However, it is not configured as an astronomical telescope and, due to its design, can only see bright objects, so it would not work to image Starman, which is predicted to be a magnitude 22 object as seen from Mars in 2020.

A much closer pass will happen at Mars on April 22, 2035. The distance this time will only be about 1.4 million miles (2.3 million km), and has a small chance of being much closer. The predicted error is higher the further in time one goes, but at this point things are still accurate enough to be very confident it will be that close to Mars within three hours of the prediction.

It is theoretically possible that a telescope could be placed on Mars by 2035 that will be able to observe Starman. A one-meter telescope, such as the South African telescope that last observed Starman, could easily do it. With so many new super-heavy rockets being planned, one of them could possibly carry such a payload to Mars by then.

(It is worth noting that, in order to resolve more than a dot, Starman would have to make a pass within 37,000 miles (60,000km) of a telescope 10m (33 feet) in diameter. This is the size of the largest telescopes on Earth, so unless Starship starts flying by Starman as part of a Solar System cruise, we may never resolve the Tesla or Starman again.)

How about the next Earth flyby? Close approaches to Earth are predicted to happen about every 30 to 35 years, often in pairs. The first of these close passes will occur on January 11, 2047. The distance is predicted to be about 3 million miles (4.8 million km), which is close enough that it can certainly be seen from Earth, about four times closer than the last reported observation of Starman from South Africa. These new observations should allow us enough data to better predict its journey throughout the Solar System for many hundreds of years to come. Starman will also make a second, slightly more distant pass in 2050.

After this point in time, measurements become much less certain. A very small error becomes a much larger one over so many years, and small errors are magnified by a huge margin when passing close to a body such as Earth. Furthermore, predictions are complicated by non-gravitational forces such as sunlight; we do not know how Starman is oriented, which will greatly influence this force.

From 2050 to 2085, we know that Starman will be in the region between Earth and Mars, making a few distant flybys of Mars, but none particularly close, likely no closer than it will be in 2020. The next time it will be close to Earth is around January 1, 2085, but the predictions are much less certain that far out—it could be off by as many as four days in either direction. A second close approach will happen around March 9, 2088.

Beyond this point we just don’t have much data, but the current predictions are for close approaches in 2119 and 2123 to Earth. Beyond this point in time, it is extremely difficult to know if a close approach will even happen at that time. During this entire period of time Starman is predicted to remain in roughly the same orbit, although there is a significant chance its orbit might start to reach out farther, maybe even reach the Asteroid Belt as Elon Musk initially stated.

Beyond simply tracking cars roaming through deep space, this kind of analysis can be helpful in other ways. Tracking asteroids and comets is extremely important; if one were to hit the Earth it could cause tremendous amounts of damage. Using the same tools that were used to make these predictions, scientists and engineers can predict the path of near-Earth objects that might someday hit our planet. These objects, like Starman, cannot be seen continually, and thus we must predict their paths with limited data—sometimes for many years into the future.

Raumfahrt - Starman is out there, but we probably won’t see him again until 2047
« Zum vorherigen Eintrag Zum nächsten Eintrag »
2361 Views
Created with page4