Giant Magellan Telescope (GMT), in Chile's Atacama Desert, will help to obtain answers on the formation and evolution of these exotic environments, as well as the possibility of life there 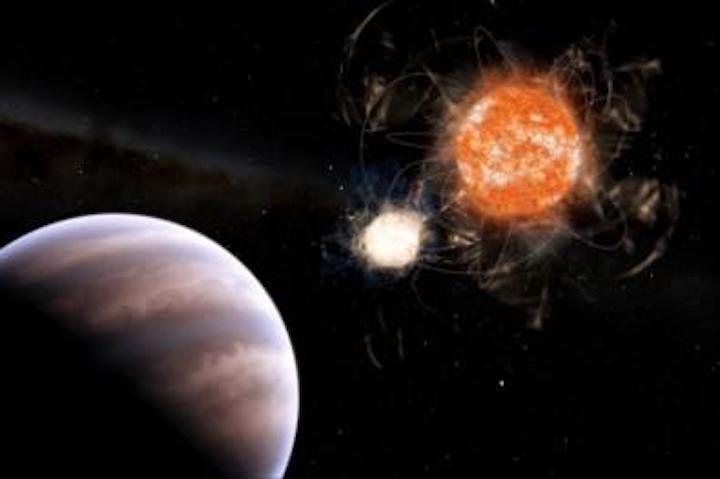 In the past three decades, almost 4,000 planet-like objects have been discovered orbiting isolated stars outside the Solar System (exoplanets). Beginning in 2011, it was possible to use NASA's Kepler Space Telescope to observe the first exoplanets in orbit around young binary systems of two live stars with hydrogen still burning in their core.

Brazilian astronomers have now found the first evidence of the existence of an exoplanet orbiting an older or more evolved binary in which one of the two stars is dead.

The study resulted from a postdoctoral research project and a research internship abroad, both with scholarships from São Paulo Research Foundation - FAPESP. Its findings have just been published in the Astronomical Journal, owned by the American Astronomical Society (AAS).

Leonardo Andrade de Almeida (https://bv.fapesp.br/en/pesquisador/265214/leonardo-andrade-de-almeida), first author of the article, told as follow: "We succeeded in obtaining pretty solid evidence of the existence of a giant exoplanet with a mass almost 13 times that of Jupiter [the largest planet in the Solar System] in an evolved binary system. This is the first confirmation of an exoplanet in a system of this kind."

Almeida is currently a postdoctoral fellow of the Federal University of Rio Grande do Norte (UFRN), having conducted postdoctoral research at the University of São Paulo's Institute of Astronomy, Geophysics and Atmospheric Sciences (IAG-USP), where he was supervised by Professor Augusto Damineli, a coauthor of the study.

Clues followed by the researchers to discover the exoplanet in the evolved binary called KIC 10544976, located in the Cygnus constellation in the northern celestial hemisphere, included variations in eclipse timing (the time taken for each of the two stars to eclipse the other) and orbital period.

"Variations in the orbital period of a binary are due to gravitational attraction among the three objects, which orbit around a common center of mass," Almeida said.

Orbital period variations are not enough to prove the existence of a planet in the case of binaries, however, because binary stars' magnetic activity fluctuates periodically, just as the Sun's magnetic field changes polarity every 11 years, with turbulence and the number and size of sunspots peaking and then declining.

To refute the hypothesis that variations in the orbital period of KIC 10544976 were due only to magnetic activity, the researchers analyzed the effect of eclipse timing variation and the magnetic activity cycle of the binary's live star.

KIC 10544976 consists of a white dwarf, a dead low-mass star with a high surface temperature, and a red dwarf, a live (magnetically active) star with a small mass compared to that of our Sun and scant luminosity due to low energy output. The two stars were monitored by ground-based telescopes between 2005 and 2017 and by Kepler between 2009 and 2013, producing data minute by minute.

"The system is unique," Almeida said. "No similar system has enough data to let us calculate orbital period variation and magnetic cycle activity for the live star."

Using the Kepler data, they were able to estimate the magnetic cycle of the live star (red dwarf) based on the rate and energy of flares (large eruptions of electromagnetic radiation) and variability due to spots (regions of cooler surface temperature and hence darkness caused by different concentrations of magnetic field flux).

Analysis of the data showed that the red dwarf's magnetic activity cycle lasted 600 days, which is consistent with the magnetic cycles estimated for low-mass isolated stars. The binary's orbital period was estimated at 17 years.

"This completely refutes the hypothesis that orbital period variation is due to magnetic activity. The most plausible explanation is the presence of a giant planet orbiting the binary, with a mass approximately 13 times that of Jupiter," Almeida said.

Confirmation of its status as either a first- or second-generation planet and its direct detection as it orbits the binary could be obtained using the new generation of ground-based telescopes with primary mirrors exceeding 20 meters, including the Giant Magellan Telescope (GMT) installed in Chile's Atacama Desert. The GMT is expected to see first light in 2024.

"We're probing 20 systems in which external bodies could show gravitational effects, such as KIC 10544976, and most are only observable from the southern hemisphere. The GMT will enable us to detect these objects directly and obtain important answers on the formation and evolution of these exotic environments, as well as the possibility of life there," Almeida said.