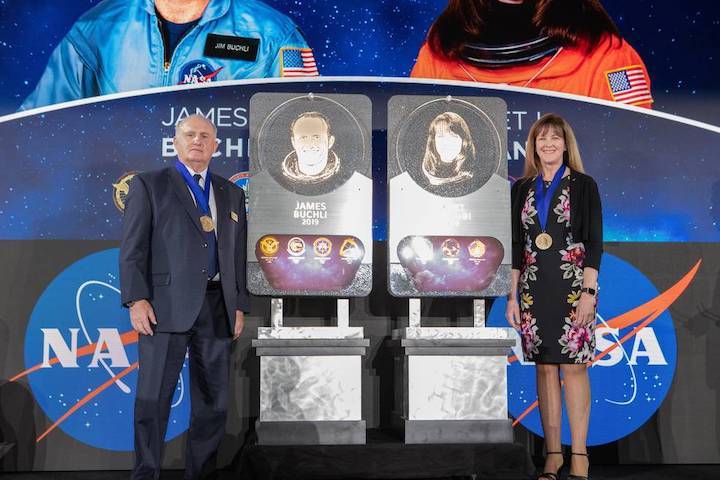 Former NASA astronauts Jim Buchli and Janet Kavandi are inducted into the U.S. Astronaut Hall of Fame Class of 2019 during a ceremony on April 6, 2019, inside the Space Shuttle Atlantis attraction at NASA’s Kennedy Space Center Visitor Complex in Florida. They unveiled their plaques, which will be placed in the Hall of Fame at the visitor complex.
Credits: NASA/Cory Huston

Janet Kavandi, director of NASA’s Glenn Research Center, and James Buchli are the latest veteran NASA astronauts to join the ranks of the U.S. Astronaut Hall of Fame.

"The pioneering spirit we see in every astronaut is truly exemplified by this year's inductees,” said NASA Administrator Jim Bridenstine. "Janet Kavandi and James Buchli represent the best of America’s astronauts, and I congratulate them for achieving this prestigious honor. Each has contributed greatly to the NASA mission, and their efforts have helped lay the groundwork for where we are today — including Janet's leadership directing Glenn’s Moon to Mars work — as we chart a course for a return of American astronauts to the lunar surface in five years, and eventually on to Mars.”

During her time in the NASA Astronaut Office, Kavandi supported International Space Station payload integration, capsule communications and robotics, and served as deputy chief of the Astronaut Office. She became the director of Glenn in 2016.

The Astronaut Scholarship Foundation selects astronauts for induction into the U.S. Astronaut Hall of Fame, which was founded more than 30 years ago by the six surviving Mercury 7 astronauts as a venue where space travelers could be remembered and honored. 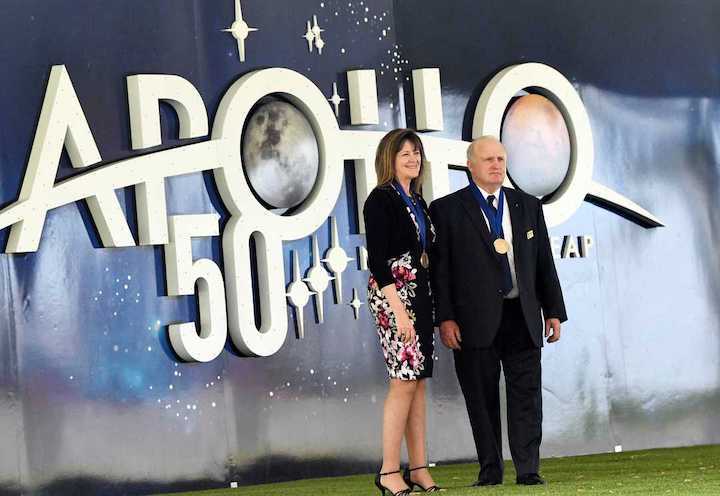 CAPE CANAVERAL — Both were from small towns in middle America destined for great things. 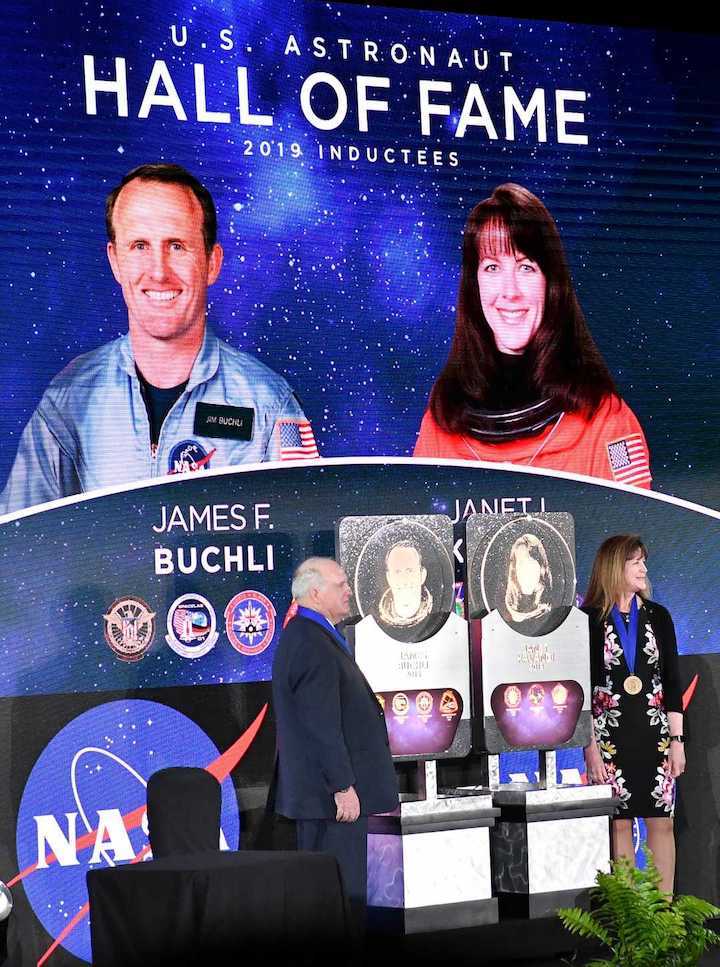 Janet Kavandi remembers looking up at the night sky from rural Missouri where the Milky Way would be on full display. James Buchli came home from a 13-month tour of Vietnam to a below-freezing North Dakota winter.

Together, they would uproot and go on to fly more than a combined 20 million miles in orbit, circling the earth hundreds of time each. Buchli flew four shuttle missions between 1985 and 1991. Kavandi flew three between 1998 and 2001.

The two longtime Space Shuttle astronauts were inducted into the U.S. Astronaut Hall of Fame on Saturday as part of the 18th class of space explorers to be recognized. Only 99 astronauts ever have been inducted.

Kavandi, a scientist with several advanced degrees, might give off an air of quiet academia — at least that’s what fellow astronaut Steve Lindsey thought upon meeting her. 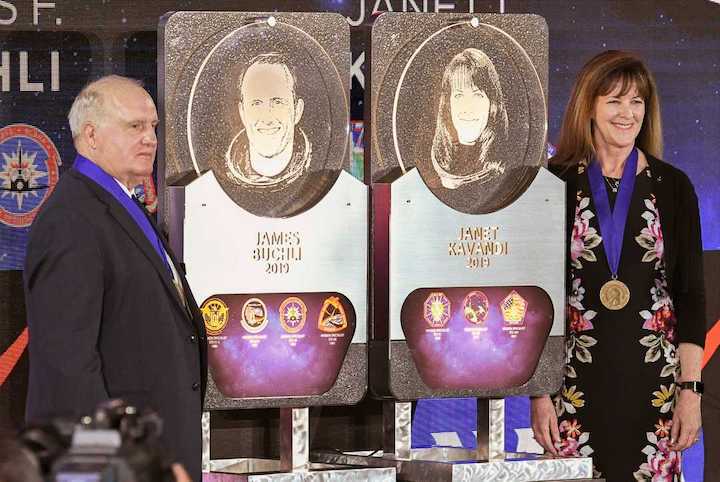 That was until they were on the shuttle where the crew was charged with testing out a new space-age toilet.

“Suddenly, something long and brown comes floating toward us” from under the curtain outside the toilet, Lindsey recalled. He looked on with horror and disgust until he saw Kavandi in the corner holding a camcorder and laughing. 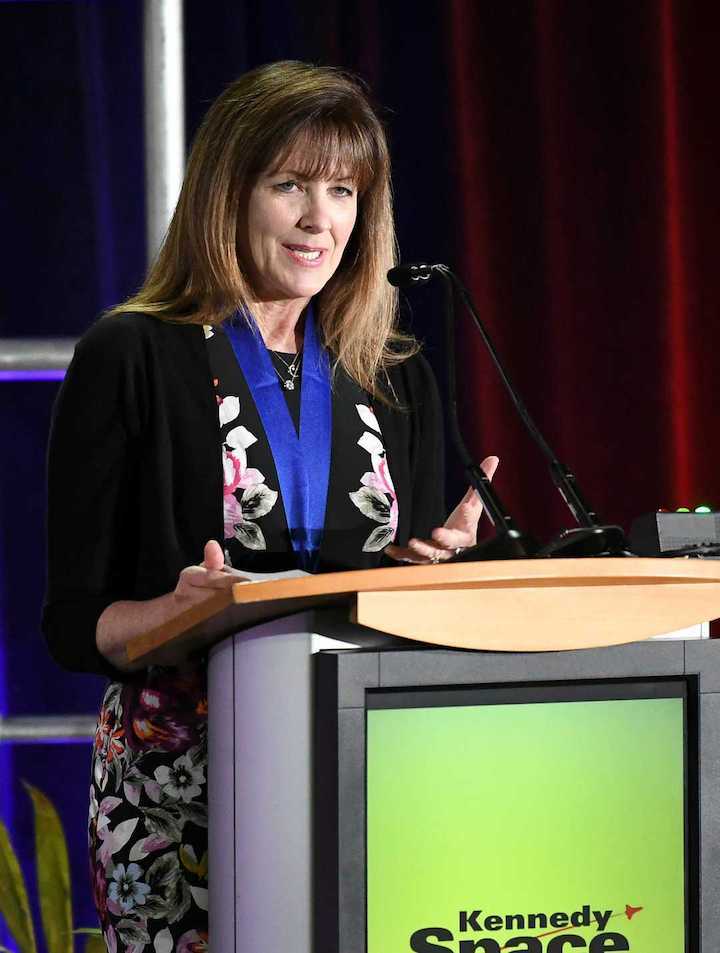 A room full of the country's brightest and bravest astronauts cracked up at the anecdote, but for Kavandi, practical jokes came second to the science of space travel.

Among her proudest contributions are the topography recordings she did, some of which are still used in navigation apps today. On a larger scale, she was also involved in the launch of a device called the Alpha Magnetic Spectrometer.

"It's up there collecting cosmic particles from the beginning of time" searching for antimatter in space, Kavandi said. "That's one of the most fundamental experiments we have in space to help answer some of the deepest questions about the origins of the universe." 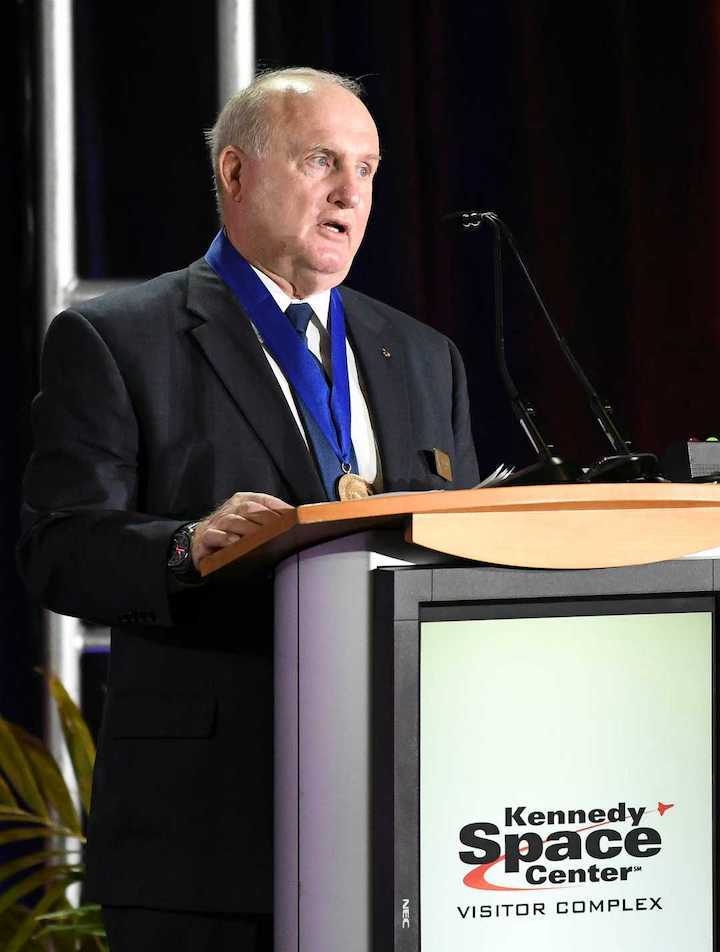 James F. Buchli talks about his time as an astronaut during his induction into the US Astronaut Hall of Fame during ceremonies Saturday at Kennedy Space Center Visitor Complex.
Craig Bailey/FLORIDA TODAY

For Buchli, it was as much about the mission as about the science.

“I have been very fortunate and blessed to have been given the opportunity to fly in space,” Buchli said. “Our space programs are a big part of the technical engine that drives our nation.”

Both astronauts -- a scientist and a soldier -- arrived in the shuttle program by different trajectories but both credited their families as a huge part of their success.

Buchli recalled talking to his wife when NASA was seeking the first class of astronauts for the shuttle program and how they made the decision together not to pass up the once-in-a-lifetime opportunity. Kavandi recalled how losing her own parents early in life made her appreciate her family and her colleagues in the space program all the more.

"These people are my family, too. We treat each other as family. We tease each other but we're also there for each other no matter what," Kavandi said. "In any trying time, your family will always be there for you."