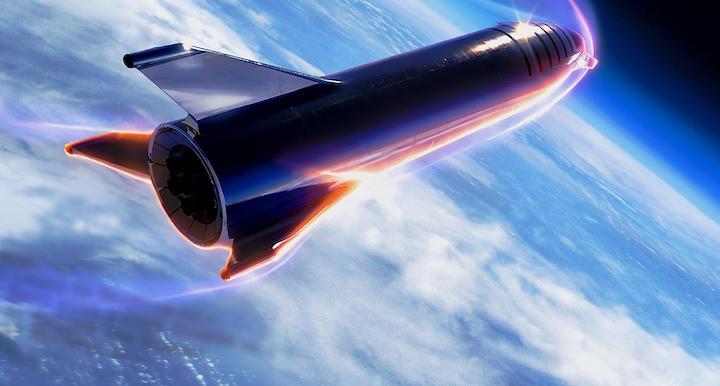 SpaceX has silently published the first known detailed render of its new stainless steel Starship’s design on the cover of Popular Mechanic’s April 2019 issue, showing the next-generation orbital spacecraft reentering Earth’s atmosphere in a blaze of glowing metal and plasma.

Despite the fact that the render seems to only be available in print and then only through one particular news outlet, Teslarati has acquired a partial-resolution copy of the image to share the latest official glimpse of SpaceX’s Starship with those who lack the means, access, or interest to purchase a magazine. Matters of accessibility aside, SpaceX’s updated render offers a spectacular view of Starship’s exotic metallic heat shield in action, superheating the atmosphere around it to form a veil of plasma around the spacecraft’s hull. According to CEO Elon Musk, the hottest parts of Starship’s skin will be reinforced with hexagonal tiles of steel and transpiration cooling, a largely unproven technology that SpaceX is already in the process of testing.

Aside from one additional view – again only distributed to Popular Mechanic – showing a far wider angle of a SpaceX Starship entering the Martian atmosphere and video shown by CEO Elon Musk to students in Flint, MI a few days ago, this appears to be the first official render of an unequivocally metallic Starship. Aside from its shiny steel exterior, this latest render also offers an exceptionally-illustrated artist’s interpretation of what a Starship with metallic thermal protection might look like during reentry, appearing to take into account a number of things that set such a system apart from traditional heat shielding. 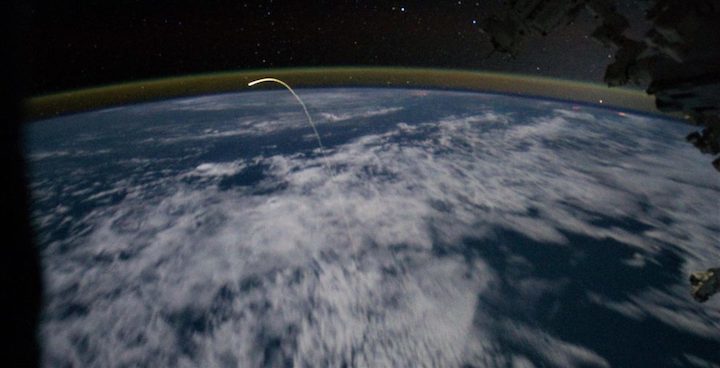 Aside from NASA’s Space Shuttle, which used fragile tiles of insulating material in its reusable heat shield, no other spacecraft have been flown with a primary heat shields that experiences little to no ablation, meaning that the material itself is not eroded during peak heating. Ablative heat shields like the PICA-X system used on SpaceX’s Crew and Cargo Dragons produce distinctly different ‘tails’ during reentry, mainly as a result of the addition of ablated material, much like injecting different elements into a fire or using different materials in rocket nozzles can drastically change the color (and sometimes behavior) of the flame.

While the extreme compressive heating of spacecraft reentering Earth’s atmosphere at many miles/kilometers per second produces plasma instead of what humans recognize as fire, the general idea remains the same. Comparing the reentry tails of spacecraft like the Apollo Command Module, the Space Shuttle, and Orion makes it clear that each vehicle and heat shield produces a subtle but distinctly unique plasma tail over the course of several minutes of peak reentry heating, when the vehicle’s velocity is fast enough to compress atmospheric gases into plasma. Different ablators end up injecting different gases into the superheated plasma tail, hence the different appearance of each tail.

Aside from a unique lack of ablation for Starship’s stainless steel hull and curious hexagonal steel heat shield tiles, SpaceX may end up having to implement a wholly unproven technology known as transpiration cooling, in which some of Starship’s liquid methane propellant would be intentionally pushed out from micro-scale holes drilled or perhaps laser-cut in certain hexagonal plates. After traveling through the steel skin/shield and out of the holes, the liquid methane would almost instantly vaporize into gas and then plasma as it confronts the spacecraft’s superheated bow shock wave, reducing the thermal loads on tiles with such an active cooling solution installed.

It’s unclear what the resulting methane-rich plasma plume might look like but it’s not out of the question that SpaceX’s graphic design team have either done the math themselves, so to speak, or asked engineers to verify what color Starship’s plasma tail might end up looking like. As shown in the latest render, a plume of hues ranging from light blue and indigo to red through white seems entirely plausible. Regardless, Starship is bound to look spectacular during orbital reentries thanks to its metallic skin and shield and planned hot structure, meaning that the entire windward half of the vehicle could end up glowing red, orange, yellow, and even white-hot, precisely like the thermal testing video Musk recently shared. 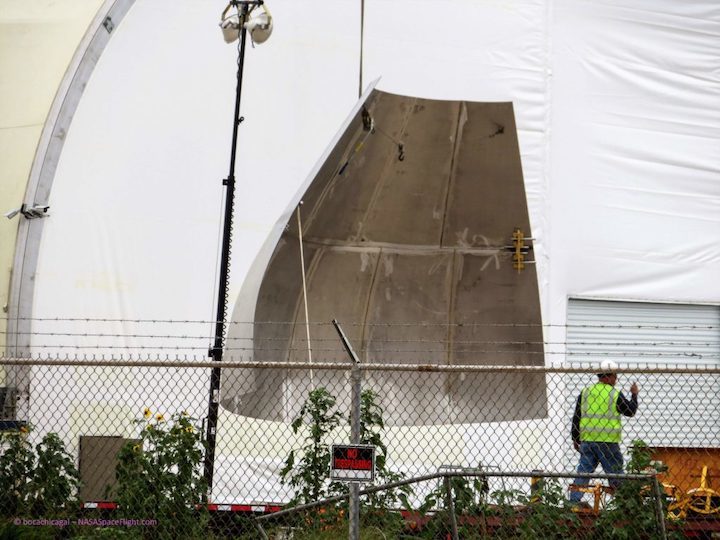 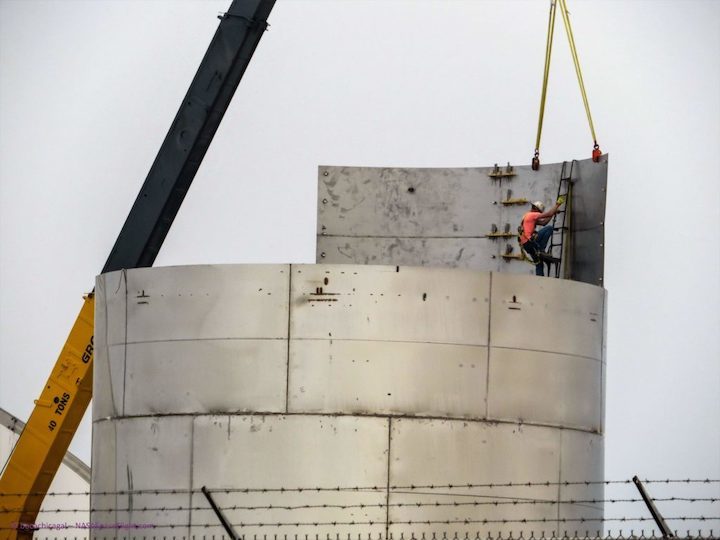 SpaceX’s first orbital Starship prototype is already under construction at the company’s ad-hoc South Texas ‘shipyard’, for lack of a better term. According to Musk, that vehicle could be ready to be done “around June” of this year, while its complimentary Super Heavy booster could begin assembly as early as April thru June, as well.

The uncrewed vehicle is a small version of a 100-passenger spaceship that will take humans to Mars. 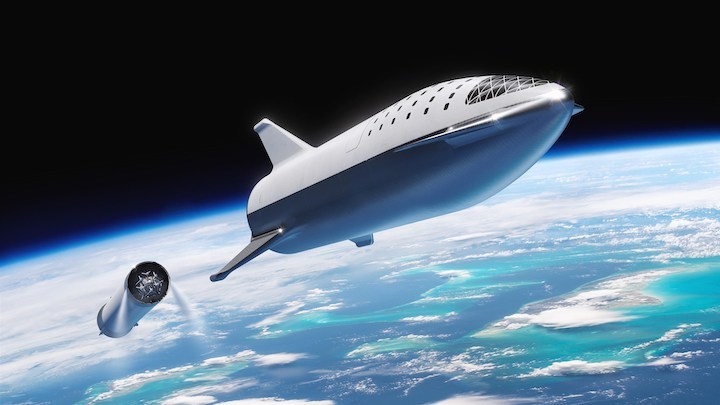 SpaceX is preparing to test a prototype of a sleek, stainless steel spaceship that the company is developing to ferry passengers on trips to Mars.

The prototype, a small version of the huge, 100-passenger Starship now in development, could undergo its first test soon, SpaceX CEO Elon Musk tweeted on March 17. The uncrewed vehicle, called Starship Hopper, is expected to take brief “hops” during the test, lifting off “only barely,” according to Musk.

Neither Musk nor the company specified a date for the test, to be conducted at the company's launch facility near Brownsville, Texas. But a county judge told the Brownsville Herald on March 21 that he had signed an order to close roads around the area on two consecutive days so SpaceX could fuel the spaceship and “test the tank.”

Views of the rocket and launch pad are being live-streamed by SPadre.com, a site that promotes tourism in South Padre Island, a resort town that is separated from the launch facility by a narrow waterway.

SpaceX intends to use the Starship as a reusable interplanetary transportation system that will launch atop a gigantic new booster known as the Super Heavy.

Musk want to use the 100-passenger Starship to colonize Mars to avoid extinction if runaway climate change or another cataclysm renders Earth uninhabitable. He said earlier this year that the vehicle could begin flying to the Red Planet in the 2020s.

The Starship could also be used for lunar missions. In September 2018, SpaceX announced that it would take Yusaku Maezawa around the moon and back, enabling the Japanese billionaire to become the first private passenger to make the trip. That flight is planned for 2023.

After weeks of preparation, the prototype test vehicle for SpaceX’s monster spaceship, known as Starhopper, fired up its methane-powered Raptor rocket engine for the first time today and lifted ever so slightly off its Texas launch pad.

The round-topped rocket is meant to serve as a testbed for SpaceX’s interplanetary-class Starship, just as earlier testbeds known as the Grasshopper and the F9R Devblazed a trail for SpaceX’s self-landing Falcon 9 rocket boosters.

Starhopper was built at SpaceX’s Boca Chica launch facility, near Brownsville, Texas, and the company’s fans have been watching avidly from afar as ground crews installed the first Raptor engine and tested out the propulsion system’s plumbing. Not just one, but two webcams have been tracking the activity day by day.

“This is the first ever firing of a rocket engine at the launch site,” Next Spaceflight’s Michael Baylor tweeted.

The Starhopper that’s currently being tested is designed for suborbital test hops, to test launches and landings with the Raptor engine. An orbital-class test vehicle could be ready for testing around June. “Orbital version is taller, has thicker skins (won’t wrinkle) and a smoothly curving nose section,” Musk said in January.

SpaceX will apply the insights gained during the test program to the design and construction of the honest-to-goodness Starship and its Super Heavy booster. In its currently planned configuration, the Super Heavy would use its 31 Raptor engines to send the refuelable Starship on transcontinental point-to-point trips between earthly spaceports, on orbital missions to deploy bunches of satellites, and on journeys beyond Earth orbit..

The aim is to have the Starship and Super Heavy ready for passengers by the mid-2020s, in order to carry Japanese billionaire Yusaku Maezawa and an entourage of artists around the moon … and set the stage for Mars trips.

SpaceX CEO Elon Musk says that the company’s first full-scale Starship prototype has completed an inaugural hop test in South Texas, igniting its lone Raptor engine and straining against a trio of tethers attached to its legs.

While relatively minor in the scope of SpaceX’s next-generation rocket program, Starhopper’s successful tethered hop now paves the way towards untethered testing in which the terminally suborbital testbed could spend several minutes aloft and reach altitudes as high as 5 km (3 mi). Aside from Starhopper itself, this perhaps marks an even more significant milestone for Raptor, completing the engine’s first successful test-fire as part of an integrated flight vehicles.

Starhopper’s first successful Raptor ignition comes after the better part of two weeks of concerted testing of the integrated prototype, beginning around March 18/19. That testing included 5+ wet dress rehearsals (WDRs) that involved loading the vehicle with a significant quantity of liquid methane and oxygen propellant, verifying the performance of avionics and plumbing, and ultimately attempting to ignite Raptor.

Ironically, less than 24 hours before Starhopper’s successful ignition, SpaceX CEO Elon Musk had noted that the rough prototype, its ground systems, or both were suffering from issues caused by ice formation in propellant valves. Reading between the lines, it’s likely that the issues involved valves on both Starhopper and its ground support equipment ‘sticking’ (i.e. failing to actuate) when commanded. While not usually a particularly large risk for the overall health of the vehicle and pad, uncooperative valves will almost invariably throw a wrench in the gears of attempted rocket operations, particularly when dealing with cryogenic propellants like those used by Starhopper.

As the supercool methane and oxygen inevitably begin to warm after leaving the propellant plant and entering Starhopper’s tanks, a fraction of the liquid will gradually transition into gas and expand, requiring constant venting of the tanks to prevent overpressure events that could damage or destroy the rocket. Falcon 9 and Heavy exhibit this same behavior, as do most other liquid-fueled rockets. This helps to explain the massive venting seen throughout Starhopper’s half-dozen or so WDR tests, as well as large but routine fireballs as excess methane gas was burned off as part of the process of vehicle and pad pressure regulation.

According to Musk, “all systems [were] green” during Starhopper’s most critical test yet. If Raptor and its prototype host are still in good health after their integrated three-second ignition test, SpaceX could attempt several more static fires and tethered hops over the next few days, mirroring the extremely rapid test series observed in February with the first completed Raptor engine.

If all proceeds nominally, it’s possible that SpaceX could begin untethered hop tests in the near future. Regardless, this marks an excellent step forward for the company’s next-generation Starship/Super Heavy spaceship and launch vehicle – all data gathered in this phase will help to optimize and improve the final design of the first orbital vehicles.