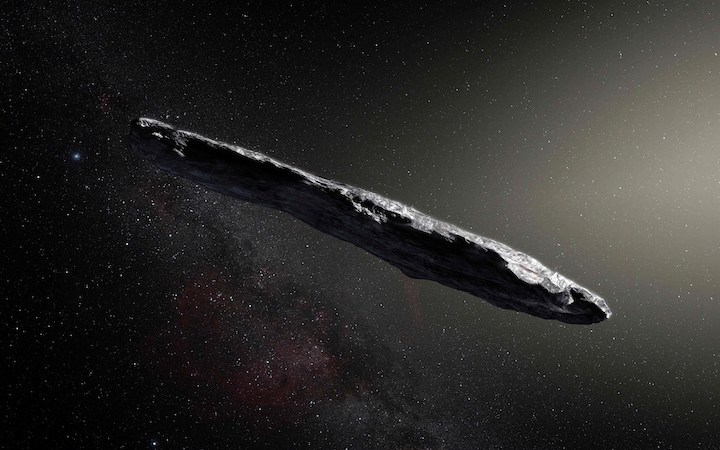 Is 'Oumuamua a comet — or an alien spaceship?

We may never learn for certain the identity of the oblong, stadium-size space object that was seen speeding past Earth in the fall of 2017, but a new study by scientists at Yale University and the California Institute of Technology adds to evidence indicating that the mysterious object — the first known visitor to our solar system from another — is simply an odd kind of comet.

The study's findings align with previous research on 'Oumuamua, whose name means "messenger from afar arriving first" in Hawaiian. They also cast fresh doubt on the highly controversial idea, floated by a pair of Harvard University astronomers in a paper published last November, that the "interstellar visitor" could be an alien spacecraft.

When 'Oumuamua was first seen, astronomers could tell from its odd trajectory that it had come from outside our solar system and that it had been traveling for millions of years. But what was it?

Many astronomers thought it was probably a comet — essentially a "dirty snowball" made of ice and dust. But comets typically don't have such an extreme shape. And comets tend to form long visible tails when they draw near the sun — yet 'Oumuamua didn't.

Then there was the way 'Oumuamua sped up in a manner that couldn't be explained by the sun's gravitational pull. That baffling behavior helped lead Avi Loeb, chairman of Harvard's astronomy department, and a colleague to argue that the object might possibly be "a fully operational space probe sent intentionally to Earth vicinity by an alien civilization."

But the authors of the new paper, which will be published in an upcoming issue of the Astrophysical Journal Letters, discount that idea. They say their research shows that while 'Oumuamua's appearance and behavior are unusual, they are nonetheless consistent with a comet, and that there's no reason to entertain more radical ideas.

"We are quite confident in our hypothesis, and do not believe that there is a need to rely on alternative, less likely explanations for the non-gravitational acceleration," Darryl Seligman, a graduate student in astronomy at Yale and the first author of the paper, told NBC News MACH in an email.

Or as Konstantin Batygin, an astrophysicist at Caltech and a co-author of the paper, said in an email, "What our paper demonstrates is that some of its remarkable properties can be understood within the framework of relatively standard cometary physics."

WHAT THE SIMULATIONS SHOW

For their research, Seligman, Batygin and Yale astronomer Gregory Laughlin ran a series of computer simulations that they say indicate that 'Oumuamua's unexpected acceleration could have been caused by gas spewing from its interior. This so-called outgassing, which occurs when heat from the sun turns a comet's ice into gas, is typical of comets — and the expelled gas and the highly reflective dust it contains are what form a comet's tail.

So why didn't 'Oumuamua form a tail? Seligman said the expelled gas could have contained so little of the tiny dust particles that it was invisible — even when powerful telescopes were trained on it.

The simulations also offer a possible explanation for another of 'Oumuamua's odd behaviors: that it didn't start spinning rapidly as it passed near the sun.

Comets generally start spinning as a result of the same venting of gas that causes them to move faster through space. But the simulations show that if the gas vented not from a single fixed or slowly moving point but from jets that quickly "migrated" across the surface, then 'Oumuamua wouldn't have spun but would have rocked back and forth like a pendulum.

The new research doesn't answer all the questions about 'Oumuamua, including its odd shape, its unusual chemical composition and where it came from. And Loeb doesn't seem convinced that the mystery has been solved.

'Oumuamua is "clearly weird relative to the 'typical' comets that we would have expected from other stars," Loeb said in an email. " We do not know the nature of 'Oumuamua, which could be artificial. We should not pretend that it must be a comet because it did not look like the typical comet we have seen before."

Loeb said 'Oumuamua doesn't resemble "at least 99.999 percent" of the comets from our solar system. "When I thought my wife is that special," he said, "I married her"

But other astronomers voiced support for the new study — and the comet hypothesis.

"I think it's a very interesting work, and it puts together many different elements of what we know on 'Oumuamua in one coherent picture," Marco Micheli, an astronomer with the European Space Agency and the lead author of a 2018 study of 'Oumuamua, said in an email. He added that the new study provides additional evidence that "the cometary mechanism we theorized is indeed real."

Robert Weryk, a postdoctoral researcher at the University of Hawaii’s Institute for Astronomy and the scientist who discovered 'Oumuamua, echoed that assessment. As he said in an email, "There is still zero reason to believe 'Oumuamua is anything but a natural object."

Astronomie - Mysterious 'Oumuamua interstellar object may have simple explanation after all New study aligns with previous research suggesting the object is a comet, not an alien spacecraft.
2261 Views
Created with page4