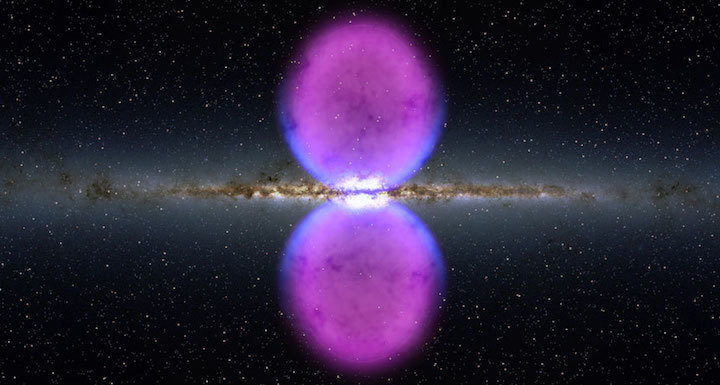 Two towering “chimneys” glowing with X-rays extend from the center of the Milky Way. The newly discovered structures could help explain the source of two even larger features: giant bubbles that emit gamma rays, or high-energy light, found above and below the plane of the galaxy.

Stretching hundreds of light-years, the X-ray chimneys seem to connect the gamma-ray bubbles to the center of the galaxy, scientists report in the March 21 Nature. “This is really interesting, and it could potentially tell us quite a lot about the origin of the gamma-ray bubbles,” says astrophysicist Tracy Slatyer of MIT. Slatyer was part of the team that discovered the bubbles but was not involved in the new study.

New observations with the European Space Agency's XMM-Newton satellite uncovered the chimneys. The researchers “have done a fantastic job to demonstrate these very distinct features,” says astronomer Daniel Wang of the University of Massachusetts Amherst. Previously, hints of such structures have been found using Japan’s Suzaku X-ray satellite, he says.

The chimneys, which are each about 300 light-years wide, could be funneling energy from the galaxy’s center to the gamma-ray bubbles, says astronomer Mark Morris of UCLA, a coauthor of the new study. “One way of looking at it is they are exhaust vents,” through which energy escapes.

Each gamma-ray bubble is itself the size of a small galaxy, and the source of the spheres’ energetic light has been a mystery since their discovery in 2010 (SN: 12/4/10, p. 18). Producing gamma rays requires highly energetic particles, which could be belched out by exploding stars, for example, or by the supermassive black hole at the heart of the galaxy as it slurps up matter and rips apart stars.

The discovery of the chimneys doesn’t definitively pinpoint such a source. But it draws a clearer connection between the galaxy’s center and the bubbles, says astrophysicist Jun-Hui Zhao of the Harvard-Smithsonian Center for Astrophysics. “This is very important to find this piece of the puzzle,” he says.

Study co-authored by UCLA astronomer provides close look at what might be happening in other, more energetic galaxies 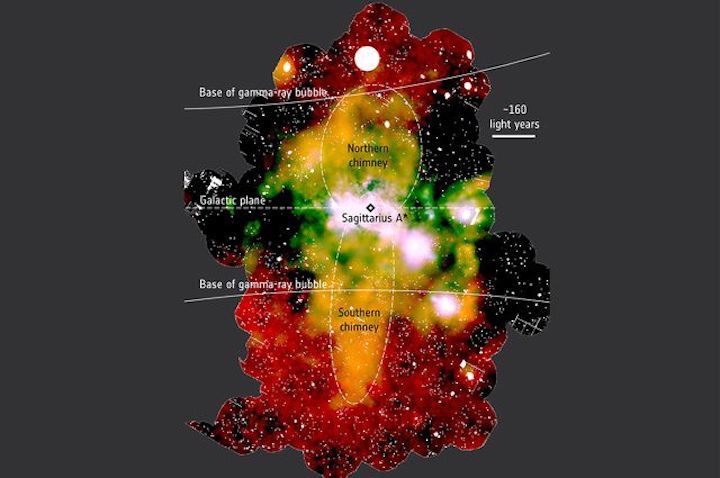 The galactic chimneys (yellow-orange areas extending vertically) are centered on the supermassive black hole at the center of our galaxy.

The center of our galaxy is a frenzy of activity. A behemoth black hole — 4 million times as massive as the sun — blasts out energy as it chows down on interstellar detritus while neighboring stars burst to life and subsequently explode.

Now, an international team of astronomers has discovered two exhaust channels — dubbed “galactic center chimneys” — that appear to funnel matter and energy away from the cosmic fireworks in the Milky Way’s center, about 28,000 light-years from Earth.

Mark Morris, a UCLA professor of astronomy and astrophysics, contributed to the research, which will be published March 21 in the journal Nature.

“We hypothesize that these chimneys are exhaust vents for all the energy released at the center of the galaxy,” Morris said.

All galaxies are giant star-forming factories, but their productivity can vary widely — from one galaxy to the next and even over the course of each galaxy’s lifetime. One mechanism for throttling the rate of star production is the fountain of matter and energy whipped up by the heavyweight black hole that lurks at a galaxy’s center.

“Star formation determines the character of a galaxy,” Morris said. “And that’s something we care about because stars produce the heavy elements out of which planets — and life — are made.”

To better understand what becomes of that outflow of energy, Morris and his colleagues pointed the European Space Agency’s XMM-Newton satellite, which detects cosmic X-rays, toward the center of the Milky Way. Because X-rays are emitted by extremely hot gas, they are especially useful for mapping energetic environments in space.

In images they collected from 2016 to 2018 and in 2012, the researchers found two plumes of X-rays — the galactic center chimneys — stretching in opposite directions from the central hub of the galaxy. Each plume originates within about 160 light-years of the supermassive black hole and spans over 500 light-years.

The chimneys hook up to two gargantuan structures known as the Fermi bubbles, cavities carved out of the gas that envelops the galaxy. The bubbles, which are filled with high-speed particles, straddle the center of the galaxy and stretch for 25,000 light-years in either direction. Some astronomers suspect that the Fermi bubbles are relics of massive eruptions from the supermassive black hole, while others think the bubbles are blown out by hordes of newly born stars. Either way, the chimneys could be the conduits through which high-speed particles get there.

Understanding how energy makes its way from a galaxy’s center to its outer limits could provide insights into why some galaxies are bursting with star formation whereas others are dormant.

“In extreme cases, that fountain of energy can either trigger or shut off star formation in the galaxy,” Morris said.

Our galaxy isn’t quite that extreme — other galaxies have fountains powered by central black holes weighing a thousand times more than ours — but the Milky Way’s center provides an up-close look at what might be happening in galaxies that are more energetic.

“We know that outflows and winds of material and energy emanating from a galaxy are crucial in sculpting and altering that galaxy’s shape over time — they’re key players in how galaxies, and other structures, form and evolve throughout the cosmos,” said lead author Gabriele Ponti of the Max Planck Institute for Extraterrestrial Physics in Garching, Germany. “Luckily, our galaxy gives us a nearby laboratory to explore this in detail, and probe how material flows out into the space around us.”

Morris said the centers of the nearest galaxies are hundreds to thousands of times farther away than our own. “The amount of energy coming out of the center of our galaxy is limited, but it’s a really good example of a galactic center that we can observe and try to understand,” he said.