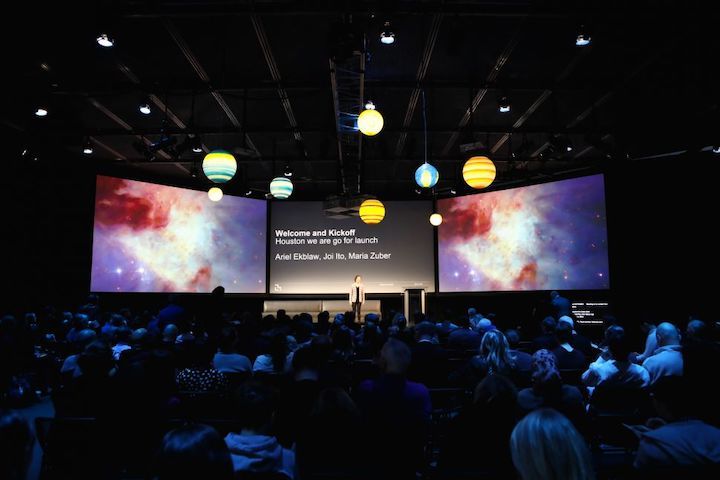 Ariel Ekblaw, the founder of MIT Media Lab's Space Exploration Initiative, welcomes the audience to the conference Beyond the Cradle 2019 on March 14 in Cambridge, Mass.

CAMBRIDGE, Mass. — The technological utopias of science fiction may still be centuries away, but building the culture of that future starts now, a trio of sci-fi creators said.

On a panel at the Beyond the Cradle conference on March 14, from the Massachusetts Institute of Technology Media Lab, science fiction creators Ytasha Womack, Daniel Suarez and Marc Okrand shared their ideas on sci-fi futures.

The trio discussed their perspectives on science, fiction and culture, arguing that this intersection not only creates an important opportunity to expand the scope of our own perspectives but also provides agency for those often left out of the conversation about space exploration.

"I think a lot of the science that we work towards is sometimes inspired by what we see in science fiction," said Womack, producer, director and author of works exploring Afrofuturism. "One of the exciting possibilities around sci-fi is that it can really continue to help push this notion of what we can create, especially as it comes to creating possible utopian societies."

Or dystopias, which popular science fiction and young adult novels tend to focus on. Womack said that while readers have an interest in dystopian stories of the future, many peoples and communities today are already living in their own forms of dystopias. By imagining societies of the future, we can explore how to improve human relations today, and in some cases even shine a harsh light on the ways our society has failed to live up to the standards we write about, Womack added.

One such disconnect is the way first contact with aliens is typically treated in fiction compared to how "aliens" on Earth are thought of and treated. While used in fiction to refer to extraterrestrials, Womack said that the initial meaning of the word "alien" simply referred to people on Earth who were different. "Even how we use it today around illegal aliens, or undocumented workers, I think it refers to a certain mentality around differences," said Womack.

Science fiction often imagines the enlightened, positive meeting of humans and an alien species, and the panelists said this approach to meeting beings different from ourselves should be brought to our everyday experiences. This will help us search for commonalities among humans instead of differences, and imagining ourselves as intergalactic beings unified by a sense of responsibility to something greater than ourselves can be an empowering experience for people, Womack said.

This acceptance of differences  is important not only at the interpersonal level, but also at the level of linguistics, said Marc Okrand, a linguist known for creating "Star Trek's" Klingon language.

"Someone asked me, 'Of all the things invented for "Star Trek," what would you like to have be the most real one?'" said Okrand. "I think everyone expected me to say universal translator. But it's not [what I'd choose], because if everyone is only ever hearing in the same language all the time and not having to do a translation on their own, they're not getting the [other] perspectives."

While framed around the discussion of fiction at this panel, these ideas of including other perspectives resonated throughout the Beyond the Cradle conference. Ariel Ekblaw, the coordinator of the conference and founder of the Media Lab's Space Exploration Initiative, said the focus of the day was to explore ways to democratize space and make it accessible not only to people all around the world, but also across many disciplines, including technology, art and design.

"The idea is to show that gradient [of expertise], but not siloed" Ekblaw told Space.com, "to show [everyone] all here together, talking together and co-designing the future of space."

Suarez addresses a growing urgency for grappling with this future in his sci-fi novels. He does so by exploring the impact of impending rapid technological change, such as the development of asteroid mining.

"In many ways, we're living in a sci-fi future already," Suarez said at the panel. "So, I try to bring my readers through the issues and challenges we're going to be facing."

Suarez's approach combines technology and culture to imagine a future where humanity can believe in a common goal, like creating industry opportunities in space, and finally imagine themselves as a single human race.

Imagining being a part of an intergalactic community via fiction can be particularly poignant for communities like the African diaspora, Womack said, because it can help people feel like they have a stake in these stories and their futures.

"I know a lot of people have been encouraged not to use their imagination," Womack said, "[but] imagination can be a tool of resilience to help people push beyond their circumstances so that they can even envision a future. And envisioning a future then inspires them to feel like they have agency in that future and take steps to create the kind of world that values humanity."

Raumfahrt - The Future's Coming: Why We Need to Prepare for Sci-Fi Tomorrows Today
2362 Views
Created with page4