The section for the November 1957 wave has the following description of Danville:

Iwent through the newspaper archive and found most of the same information one found in the UFO evidence. Most of the articles state that the two officers pursued the UFO. The time of the event is hard to pinpoint. The “Daily register” implies the events happened around 7:30 PM.4

Loren Gross’ “Fifth Horseman of the apocalypse. UFOs: A history” does provide us with additional information not found in most of the other media reports. Gross quotes come from the Danville, Illinois “Commercial-News”. He describes the officers starting in Danville around 6 PM.

Things were quiet at the Vermillion County Jail until the phone rang. The state trooper on duty, Calvin Showers, picked up the receiver. A press ac count tells us an unidentified Alvin farmer was on the line: “The farmer told Showers there was a lighted object ‘right overhead’ and moving in a southeastly direction. He said it was ‘bigger than a star. (64.) Phone calls reporting UFOs was not a big thing so Showers took no action on this report, however the situation changed when the phone rang again a moment later. The same press account tells us:

“...another call came to the jail, this time from a service station operator at Moore’s Corner, about 10 miles north of Danville on Route 1. He,too, said ‘something’ was right overhead and moving in a northwestery direction.” (65.)

This was enough for trooper Showers. He and trooper John Matulis set out for Moore’s Corner in their patrol car. The two troopers were about four miles from Danville when they first sighted the UFO which had the general appearance of a star but much larger than any star they had ever seen. The “thing,” the lawmen said, was the size of a softball (at arm’s length?).The newspaper story on this incident quotes trooper Matulis as saying: “It was round and had a glow to it. It changed from white to a bright orange.” (66.) Trooper Showers also has something to say, mentioning that the thing would brighten and then dim somewhat. The troopers had the impression the UFO was changing direction.

“The troopers said they lost radio contact from the point north on the Dixie until they reached Main and Gilbert Streets, saying they tried to call the jail four or five times. When they finally made contact, the operator told them that was the first time he had heard them.” (67.)

Moreover: “The radio was in good working order before and after they saw the object.” (68.)

“What did they see?” “i don’t know.” Our story continues:

“Showers and Matulis continued west to Oakwood, then turned south on the Sugar Creek Road to near Fairmount, keeping the object in view all the time. “They said it moved away in a southwesterly direction, apparently not changing direction or altitude. Neither would venture a guess as to its heighth.

“They turned back at the point near Fairmount. “What did they see? ‘I don’t know,1 Showers said simply. “’That’s for somebody else to figure out.’

“It should be noted that both men are trained observers. Lt. John T. Henry of District 10 Headquarters at Urbana said: ‘Show ers and Matulis are veteran troopers. I’m sure they saw it ex actly as they described it in their report.’
“Approximately eight telephone calls were made by residents who spotted the object.” (69.)5

Missing in all of the news accounts is a time frame for these events. We do have two times of 6:00 and 7:30. events probably happened between these two points in time. 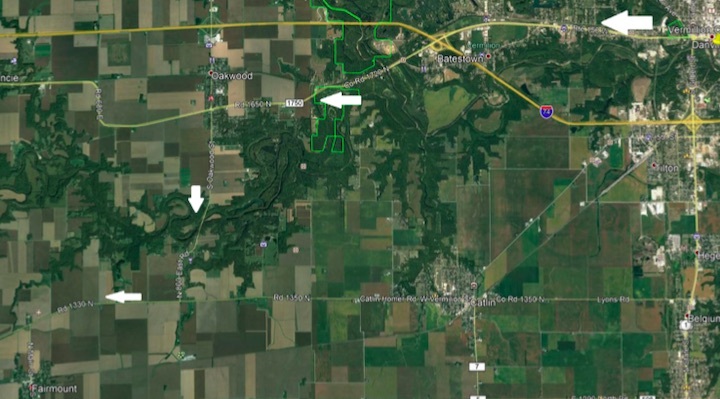 The troopers proceeded north from the jail to investigate a sighting made by a witness. They noticed the UFO after they got about four miles away from town. There is no direction given but it must have been towards the west or south because they then turned around and headed back into Danville. The officers did this because there were no major roads that went west or southwest from that location because Lake Vermillion was in the way. When they got into the center of town, they drove westward. This pursuit eventually went towards the southwest. According to the UFO evidence, this pursuit lasted about 20 minutes or 15 miles.

The first thing I wondered was if there was a celestial object in the west or southwest. Visible in the southwest was the brilliant planet Venus, which set around 7:15 PM CST. This matches a potential time line where the troopers left the station around 6:00-6:30 PM, went north about ten-fifteen minutes and then noticed the UFO to their southwest. At this point they attempted to contact the Jail until they got back into the center of town. They then traveled west and then southwest in pursuit for 20-30 minutes. It seems that their pursuit ended when they could no longer see the UFO. In this scenario, the end of the chase coincided with Venus setting.

While we cannot say for certain that Venus was the source of this report because of the lack of a definitive time line, one has to give the possibility serious consideration. In my opinion, it is likely that Venus was the source and any radio interference was caused by something else. The case should be labeled “Probably Venus” and removed from the “best evidence” list.