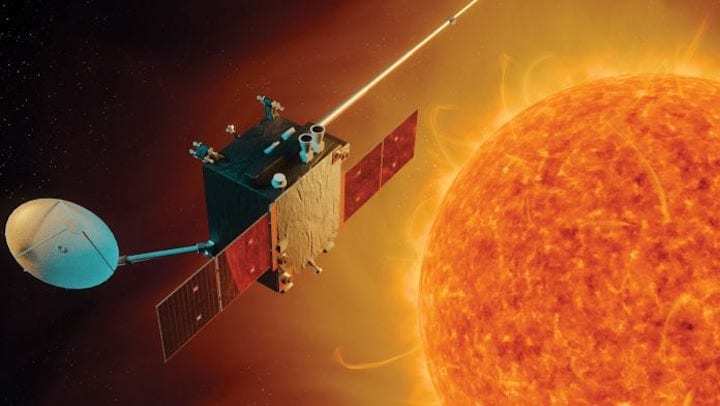 SciTech Europa met with the Director General of the European Space Agency, Johann-Dietrich Wörner in Brussels to discuss some of Agency’s current and future activities.

Space for Europe, European Space in the World’ was the theme of the 11th European Space Policy event, which SciTech Europa Quarterly attended in Brussels in February. This event posited that ‘in 2019, Europe’s space policy will find itself at a pivotal point in its development as it will be confronted with multiple key questions about the responses to be brought to new critical needs and major new challenges.’

One of the key players in addressing these challenges is, of course, the European Space Agency (ESA), and SciTech Europa Quarterly met with ESA’s Director General, Johann-Dietrich Wörner, at the event to discuss some of the most pertinent issues, from space weather and debris to autonomous access to space and the forthcoming ESA Ministerial.
Growing threats are emerging in space (space debris, cyber threats, the impact of space weather etc.) which make synergies increasingly relevant.

As such, the Commission has argued that Europe must draw on its assets and use space capacities to meet the security and safety needs of Member States and the EU.

How does ESA work in this space?

The ESA convention is explicit in stating that we work for exclusively peaceful purposes, which is an important point to highlight. We are currently establishing a programme called ‘Space Safety’; ‘space safety’ covers all threats that originate in space, such as space weather coming from solar flares, as well as space debris and Near Earth Objects (NEOs) which could potentially hit the Earth.

There are three examples of areas where this is important. Regarding space, we are going to propose a mission to our Member States which will be positioned at a point in space (Lagrange Point 5) where it is possible to perfectly observe any solar flares heading towards the Earth. By doing this, we will be able to provide an advanced warning about such events, meaning that ground-based infrastructure will know, beforehand, that solar radiation is going to strike the Earth.

In today’s world, which relies so heavily on things like the Internet, the electricity network, and so on (which is fundamentally different to the world we experienced just 150 years ago) due to the fact that solar radiation can have a devastating impact on the systems and infrastructures so integral to the everyday lives of citizens.

These examples demonstrate just how important it is to know about the solar flares that are going to strike the Earth well in advance so that steps can be made to mitigate their effects. Of course, many solar flares do not strike the Earth, but the ones that do really have the potential to be extremely disruptive, if not dangerous.

The aforementioned mission will thus be able to detect the direction and speed of the solar flares: NASA will use a satellite to see whether the solar flares are heading in our direction, while ESA’s satellite, in a different location, will measure the speed.

The second example is space debris. There is a huge number of satellites currently in orbit, but which are no longer operational, as well as around 750,000 pieces of debris of at least 1cm in size and travelling at a speed of some 30,000 kilometres an hour. While tracking this debris is, of course, important, it is only the first step; we also need to be able to prevent additional debris and counteract, and there are two ways to do this: we can use artificial intelligence to make satellites smart enough to avoid collisions; and we can actively remove the existing debris.

Regarding the latter, we will soon be proposing missions to our Member States in the hope of making this a reality. Finally, NEOs present a very real threat (an NEO was, of course, probably the cause of the dinosaurs’ extinction). More recently, in 1908 years ago, the Tunguska event flattened 2,000 square kilometres of forest, and in 2013 the Chelyabinsk meteor entered Earth’s atmosphere over Russia on 15 February. Observing NEOs is useful as we gain valuable information, but it does not have an impact.

We are therefore working with our American colleagues to effectively learn how “to play billiards” in space; we want to be able to hit an asteroid in order to be able to deflect it.

This space safety programme is currently just a proposal (it is yet to be approved); although an element of this, the Space Situational Awareness programme, is already running, but is simply designed, as the title suggests, to monitor and so raise awareness of these issues.

As you have mentioned, ESA’s convention states that the agency’s purpose is exclusively peaceful. So how is ESA working with the Commission towards a European Space Security Policy?

There is, of course, the philosophical question of whether defence is peaceful, and while politicians will always say that it is, this is by no means a definitive answer. As such, I have decided that, for as long as I am ESA’s Director General, we will not take part in this discussion by simply stating that we will only operate for peaceful purposes, and this means including security and safety for individuals and for society.

Safety and security projects we will include will thus cover both threats that originate in space, such as those we have already discussed, and threats which originate on the ground (such as volcanoes, tsunamis, etc.).

As always, we should not be naïve, and dual use is always a possibility even if it is not our intent. We will always work to develop technologies and to launch programmes and projects for peaceful purposes, but there is always the danger that things we develop in the areas of Earth Observation, telecommunications, navigation, and so on, could be reworked and used for different purposes, but there is very little that we can do to prevent that from happening.

You have said that “we are on track for united space in Europe and for a united Europe in space.”

What additional progress has been made here in the last few years? What remains to be done?

We have made a lot of progress together with the EU and our Member States. ESA itself is already united in space in Europe with our 22 Member States. However, some EU states are not yet ESA members, and it was therefore of the upmost important in 2016 to come up with a joint statement between the EU and ESA for joint goals which incorporated the European spirit of cohesion and identity. And it is important to highlight that this is for Europe and not for just the EU and not just for ESA; ESA is following this joint statement in all of our presentations and all our strategies.

The EU, of course, now has a new regulation in preparation with regard to its additional activities here, and within that ESA is mentioned with regard to its technical and managerial capacities, and so we are now beginning a dialogue with the EU about the so-called ‘Financial Framework Partnership Agreement’, where we will define not only the financial aspects, but also the strategic interaction and strategic corporation for the sake of Europe and beyond.

Promoting international co-operation for space will be crucial moving forwards.
How would you like to see this being approached?

From an ethical point of view, co-operation is the only way to be proactive against future crises. Of course, no level of co-operation can ever protect things 100%; we had solid relations between the USA, Europe, and Russia, for instance, and then Russian’s annexing of Crimea happened. Co-operative working is a bridge, and space is the perfect instrument through which to achieve that because we fly our technology above the Earth’s borders; space is about being above Earthly crises.

It is crucial that Europe continues to have modern, efficient and flexible launch infrastructure facilities moving forwards, and the European Commission has been considering ways to support such facilities within its areas of competence.

What are your thoughts on the progress that has been made here?

Our goal is to maintain independent access to space for Europe. We have gained a lot of experience here since the 1960s, and we want to continue forwards with this as a key focus area.

Of course, autonomous access to space is best achieved by being commercially competitive, and we are therefore looking for a competitive launcher, and with Ariane 6 and Vega C we are on a good, very good path towards having a competitive launcher family. We are already looking beyond that, too. For example. we are developing new engines which will not only be used for a new launcher, but the technology that is being developed within that work is also going to be used in Ariane 6.

The difficulty in accessing the Big Science market

The Big Science market, which, of course, ESA is a part of, can be difficult for smaller European companies to access. Is ESA doing enough to help?

Quite simply, we have to; we want to; and because of our convention and because of our geographical return model, we need to. We have therefore developed, specifically for SMEs and new entrepreneurs entering the market, special instruments for training, for instance.

I am also happy to announce, for the first time, that we are now looking at making our processes and proposals for programmes similar to each other, which will open things up and so ease the way for SMEs to enter into any given programme. While this might sound like a trivial thing, it is actually a big step forward, and just yesterday I sent out clear instructions regarding what I expect in that direction. I am looking forward to simplifying the way we are work by having this enhanced similarity between our different activities.

Finally, do you have any specific hopes for outcomes from the 2019 Ministerial?
This ministerial, ‘Space 19 +’ as it is known, is going to be a very challenging ministerial not only because it is looking at the space sector far beyond 2019, but also because it is a fully-fledged ministerial (as opposed to the one which took place in 2016), and so will include all aspects.

We have new narratives of science and exploration, of space safety and security, of applications, and of enabling and support. These four main pillars will be addressed with a number of proposals that we have in development and, of course, we hope that we will get the support that we need for our ambitious programmes and, indeed, for our continuity.

However, as well as placing importance on continuity, we must also emphasise disruption; disruption is linked to ambition therefore each and every pillar we have disruptive proposals alongside the more traditional ones.

We know from our various activities that we have the support of citizens, and now we just need the politicians to follow suit.