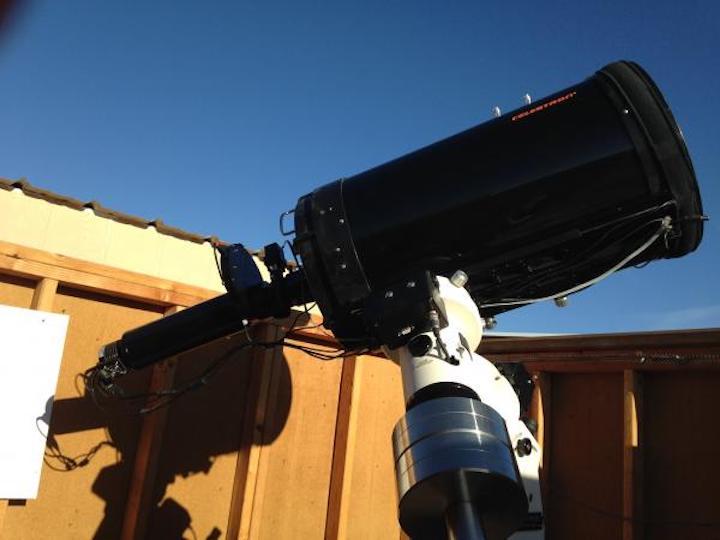 Visit https://www.psi.edu/sites/default/files/ftp/Na_SII_best_0.mp4 to see a video animation of sodium (left) and ionized sulfur (right) emission around Jupiter (under black strip) recorded by PSI's Io Input/Output facility (IoIO) over a three-month period. The animation shows the dynamic nature of the system: Io orbits Jupiter every 1.5 days and Jupiter rotates every 10 hours. The strong magnetic field of Jupiter traps the ring of sulfur ions, known as the Io plasma torus, shown in the right panel.

“These results highlight the growing body of evidence that the traditional way of monitoring Io's volcanism – by looking for temperature changes on its surface caused by hot lava – is not able to reliably find these large gas release events,” said Jeff Morgenthaler, a senior scientist at the Planetary Science Institute and lead author on the paper “Large Volcanic Event on Io Inferred from Jovian Sodium Nebula Brightening.”

“Lack of a strong infrared counterpart to this event tells us something about the geology of Io. To use some well-known Earth analogies, this volcanic event may have been from an eruption more like that of Mount St. Helens in 1980, which released lots of gas and dust, rather than Kilauea’s recent eruptions in Hawaii, which produce lots of hot lava,” Morgenthaler said.

“The volcanic event occurred sometime between mid-December 2017 and early January 2018. Gas from the event filled Jupiter’s magnetosphere, the region of space dominated by Jupiter’s magnetic field, with excess material until early June,” Morgenthaler said. “Io is the most volcanic body in the solar system, so its volcanism is the ultimate source of the material. Interestingly, this event, which was the longest recorded by this technique, was not independently reported by any other Io volcanic monitoring technique, despite significant number of observations in support of NASA's Juno mission.”

A small telescope popular with amateur astronomers was used to detect the volcanic event. Planetary Science Institute’s Io Input/Output facility (IoIO), is outfitted with a coronagraph, which reduces the intensity of the light from Jupiter and allows light coming from clouds of gas around Jupiter to be imaged through special filters.

Besides the intrinsic interest of studying volcanism on another solar system body, these results are interesting because the movement of extra material through Jupiter’s magnetosphere drives a host of physical phenomena observable by other techniques. In other words, the IoIO results place many other observations of Jupiter’s magnetosphere in context, such as those being conducted by and in support of NASA’s Juno mission.

“The immediate goal of the research is to better understand how ionized material moves in a rapidly rotating planetary magnetosphere,” Morgenthaler said. “Ultimately, this project will help us understand all magnetospheres better. Since the Earth’s magnetosphere protects us from some of the harmful effects of living relatively close to a star, this research does have some ‘down home’ applications.”

The first version of IoIO was designed by coauthor Jeffrey Baumgardner of Boston University, who used it to detect the sodium cloud near Io from his back yard in a Boston suburb. Morgenthaler said, “I think the demonstrated ability of this technique to work in such a high light pollution environment definitely helped sell the project to the National Science Foundation!”

By using equipment popular with high-end amateur astronomers, the project was able take advantage of the low cost of mass-produced equipment. The project is funded by a National Science Foundation grant to PSI.