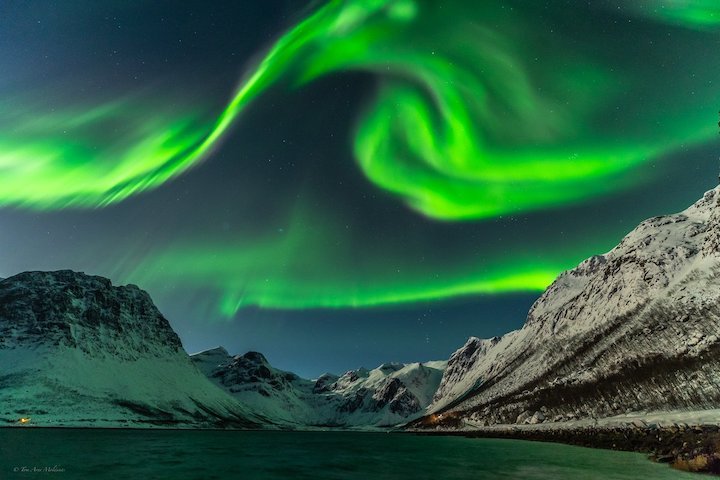 However, in 2009, scientists discovered aurora can look differently around the north pole and the south pole, including having different shapes and occurring at different locations – a phenomenon called asymmetry.

Now, a new study in the Journal of Geophysical Research: Space Physics, a publication of the American Geophysical Union, explains how this asymmetry comes about and causes the differences in auroral displays near Earth’s poles. The new research finds the differences in aurora are likely caused by squeezing of Earth’s magnetotail — a magnetic tail that extends away from our planet — by the solar wind and the Sun’s magnetic field.

The new finding contradicts previous theories about asymmetry, which suggested it was caused by the pulling apart and reconnecting of magnetic field lines in the Earth´s magnetic tail, a process called tail reconnection. The new study finds that, in fact, tail reconnection reduces this asymmetry.

“The reason this is exciting is that earlier we have thought that the asymmetry in the system enters the magnetosphere by a mechanism called tail reconnection,” said Anders Ohma, a PhD candidate at the University of Bergen in Norway, and lead author of the new study. “What this paper shows is that it’s possible that it is actually the opposite: This reconnection in the magnetotail is actually reducing the asymmetry.”

Not only does the new research explain why the northern and southern lights appear different in the night sky, but it also helps scientists better understand interactions between the Earth and the Sun. This knowledge is important for accurately predicting the location and timing of space weather events, which can create havoc for our electricity grids, satellites and astronauts in space.

A related paper in the journal Annales Geophysicae details the asymmetry seen during a geomagnetic storm in August of 2001, and demonstrates the importance of considering geospace, or the interactions between the Sun and Earth, as an asymmetric system.

“Without including these asymmetries our understanding of the Sun-Earth system will be far from complete and models will not be able to accurately predict the location and timing of geospace phenomena,” said Nikolai Østgaard, professor and head of the Birkeland Centre for Space Science at the University of Bergen in Norway, and lead author of the study in Annales Geophysicae.

But, the new research shows this is not the case. The new study examined multiple images of asymmetric aurora in the northern and southern hemispheres at the same time and how these auroras evolved over time, so they could see the same phenomenon happening over and over. Then they related it to activity in the magnetotail.

Instead, the new research finds it is differences in pressure being exerted on the magnetotail that cause these auroral differences. The magnetotail is being constantly squeezed by the solar wind and IMF, and it is this non-uniform squeezing on it from different directions that is causing the differences in auroral displays at the two poles. The squeezing depends on the orientation of the IMF.

“This study explains both how asymmetries are created and how it is removed and it is exactly opposite of what I and many researchers have thought,” said Mike Liemohn, editor-in-chief of JGR-Space Physics. “Therefore, this result is kind of big deal.”