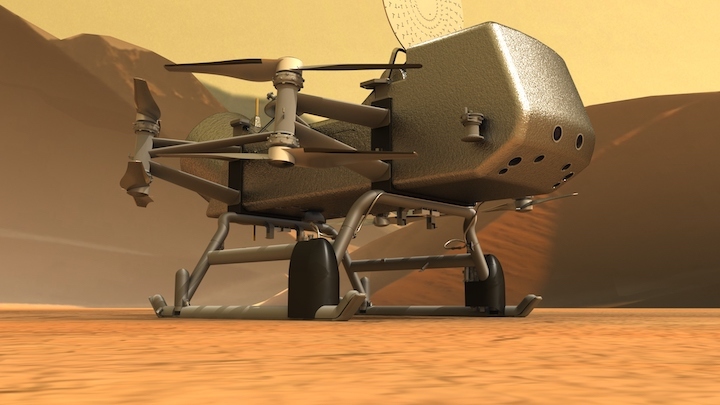 Dragonfly, led by the Johns Hopkins Applied Physics Lab (APL), is a concept to send a rotorcraft-lander to Saturn's exotic moon Titan.

Designed to sample surface materials and measure the compositions of Titan's organic surface materials, Dragonfly would explore a variety of locations to characterize the habitability of Titan's environment, investigate the progression of prebiotic chemistry, and even search for chemical hints of water-based or hydrocarbon-based life.

The instruments that would collect this this data are in development and being tested in Titan-like conditions at APL in Maryland and at other locations across the country.

Dragonfly is vying to become NASA's next New Frontiers-class mission. If NASA selects Dragonfly, it would launch in 2025 and reach Titan in 2034. Titan's dense, calm atmosphere and low gravity make flying an ideal way to explore – in fact, under those conditions, flight is actually easier on Titan than it is on Earth.

The Dragonfly team is using this stage of their study, called "phase A" in NASA parlance, to develop and demonstrate aspects of that payload.

The Huygens probe – the only lander on Titan to date – demonstrated the potential for aerial and landed imaging of Titan using the moon's ambient reddish lighting. Dragonfly will also use LED arrays to provide nighttime imaging of Titan materials, and ultraviolet illumination to characterize Titan's organic sediments and hydrolysis products by fluorescence.

NASA is expected to decide on the next New Frontiers mission by summer 2019.

Raumfahrt - Eyes on Titan: Dragonfly Team Shapes Science Instrument Payload Dragonfly is one of two proposals in the running for NASA's next New Frontiers mission
2090 Views
Created with page4