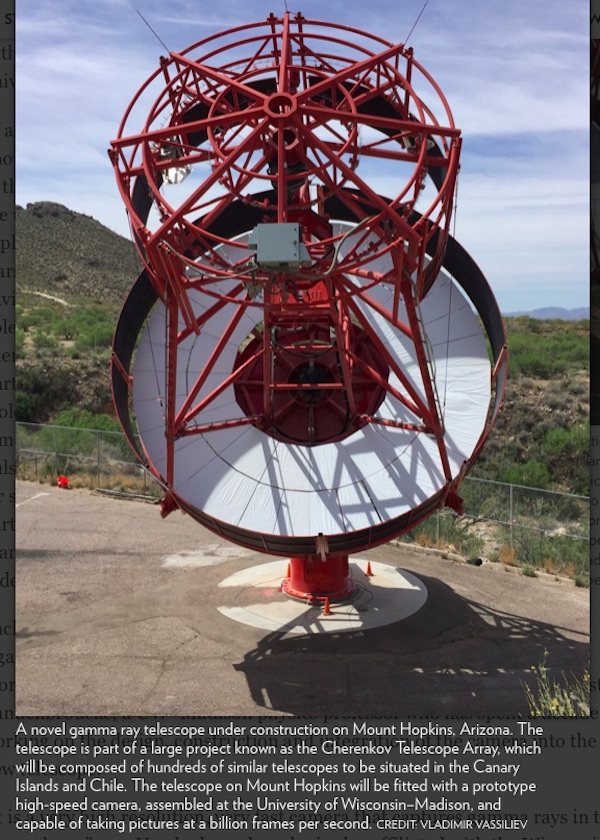 A new telescope, part of an international effort to develop and build the world’s largest, most sensitive gamma-ray detector, was unveiled to the public Thursday (Jan. 17, 2019) in a ceremony at the Whipple Observatory on Arizona’s Mount Hopkins.

Known formally as the prototype Schwarzchild-Couder Telescope, the new telescope is a working, high-end test bed for technologies to be used in the Cherenkov Telescope Array (CTA), a configuration of approximately 100 telescopes intended to give astrophysicists their best look ever at the transient effects of gamma rays interacting with particles high in the Earth’s atmosphere.

The heart of the new telescope is a novel, high-speed camera devised in part by scientists at the University of Wisconsin–Madison and in collaboration with researchers from other universities.

In astrophysics, gamma rays are known to be produced by some of the most energetic objects in the universe: supernova explosions, pulsars, neutron stars and the swirling environments around black holes. When the highly-energetic gamma rays reach Earth, they interact with molecules high in the Earth’s atmosphere and create a fleeting pulse of Cherenkov light in an air shower. The burst of light particles or photons lasts less than the blink of an eye – on the order of six nanoseconds.

Each pulse enables detection of a gamma ray a trillion times more energetic than can be observed with the human eye, according to Justin Vandenbroucke, a UW–Madison physics professor who has spent a decade working on the design, construction and integration of the camera into the new telescope.

“It is a very high resolution, very fast camera that captures gamma rays in the atmosphere,” says Vandenbroucke, who is also affiliated with the Wisconsin IceCube Particle Astrophysics Center at UW–Madison. “It operates at a billion frames per second and captures the direct output of a gamma ray shattering a molecule of air.”

Combined with a complex dual-mirror optical system that promises much greater resolution for the telescope overall, the camera is expected to yield a trove of new data on the Cherenkov air showers. The telescope’s optics provide a wide field of view, necessary to capture the unpredictable bursts of light that occur when a gamma ray crashes into an air molecule.

The newly-dedicated Schwarzchild-Couder Telescope is an important test bed for technologies to be included in CTA, the long-planned configuration of approximately 100 telescopes to be situated in the Canary Islands and in Chile. When completed, it will be the largest ground-based gamma-ray detection observatory in the world. The international collaboration building CTA includes more than 1,400 scientists from 32 countries.

The prototype high-speed camera at the core of the telescope is the size of a golf cart, weighs several hundred pounds, and is capable of taking pictures at a billion frames per second.

The telescope unveiled this week on Mount Hopkins and its camera are funded by the National Science Foundation and international partners.

AMADO, Ariz. — On 17 January 2019, a prototype telescope proposed for the Cherenkov Telescope Array (CTA), the prototype Schwarzschild-Couder Telescope(pSCT) is being unveiled in a special inauguration event at the Center for Astrophysics | Harvard & Smithsonian, Fred Lawrence Whipple Observatory(FLWO) in Amado, Arizona. A dual-mirrored Medium-Sized Telescope, the SCT is proposed to cover the middle of CTA’s energy range (80 GeV – 50 TeV).

“The inauguration of the pSCT is an exciting moment for the institutions involved in its development and construction,” said CTA-US Consortium Chair David Williams, a professor of physics at the University of California, Santa Cruz. “The first of its kind in the history of gamma-ray telescopes, the SCT design is expected to boost CTA performance towards the theoretical limit of the technology.”

The SCT’s complex dual-mirror optical system improves on the single-mirror designs traditionally used in gamma-ray telescopes by dramatically enhancing the optical quality of their focused light over a large region of the sky and by enabling the use of compact, highly-efficient photo-sensors in the telescope camera.

“Ultimately, the SCT is designed to improve CTA’s ability to detect very-high-energy gamma-ray sources, which may also be sources of neutrinos and gravitational waves,” said Prof. Vladimir Vassiliev, Principal Investigator, pSCT. “Once the SCT technology is demonstrated at FLWO, it is hoped that SCTs will become a part of at least one of the two CTA arrays, located in each of the northern and southern hemispheres.”

The CTA Observatory (CTAO) will consist of 118 telescopes split between a southern array in Paranal, Chile and a northern array on the island of La Palma, Spain. Three classes of telescopes (Small-, Medium- and Large-Sized Telescopes) will be used to detect gamma rays in the energy range 20 GeV to 300 TeV with about ten times increased sensitivity compared to any current observatory. Notable for providing improved gamma-ray angular resolution and its very-high-resolution camera (>11,000 pixels), the SCT is proposed for the medium-sized CTA telescopes, which are considered to be the “workhorses” of the arrays with 15 planned for the north site and 25 for the south site.

“The SCT and other telescopes at CTA will greatly improve upon current gamma-ray research being conducted at HAWC, H.E.S.S., MAGIC and VERITAS, the last of which is located at the Fred Lawrence Whipple Observatory,” said Dr. Wystan Benbow, Director, VERITAS. “Gamma-ray observatories like VERITAS have been operating for 12 to 16 years, and their many successes have brought very-high-energy gamma-ray astronomy into the mainstream, and have made many exciting discoveries. We hope CTA will supersede VERITAS around 2023, and it will be used to continue to build upon the 50 years of gamma-ray research at the Whipple Observatory and elsewhere.”

“I am very pleased to congratulate our colleagues that have conceived and realised such a promising prototype for the Medium-Sized Telescopes, a major component of the family of instruments that will characterise the CTA Observatory,” said Federico Ferrini, Managing Director of the CTAO.

The SCT optical design was first conceptualized by U.S. members of CTA in 2006, and the construction of the pSCT was funded in 2012. Preparation of the pSCT site at the base of Mt. Hopkins in Amado, AZ, began in late 2014, and the steel structure was assembled on site in 2016.  The installation of pSCT’s 9.7-m primary mirror surface —consisting of 48 aspheric mirror panels—occurred in early 2018 and was followed by the camera installation in June 2018 and the 5.4-m secondary mirror surface installation—consisting of 24 aspheric mirror panels—in August 2018. Leading up to the inauguration and in preparation for first light, scientists opened the telescope’s optical surfaces in January 2019.  The SCT is based on a 114 year-old dual-mirror optical system first proposed by Karl Schwarzschild in 1905, but only recently became possible to construct due to the critical research and development progress made at both the Brera Astronomical Observatory and Media Lario Technologies Incorporated in Italy. The pSCT was made possible by funding through the U.S. National Science Foundation Major Research Instrumentation program and by the contributions of thirty institutions and five critical industrial partners across the United States, Italy, Germany, Japan, and Mexico.

About Center for Astrophysics | Harvard & Smithsonian

Headquartered in Cambridge, MA, the Center for Astrophysics (CfA) | Harvard & Smithsonian is a collaboration between the Smithsonian Astrophysical Observatory and the Harvard College Observatory. CfA scientists, organized into six research divisions, study the origin, evolution and ultimate fate of the universe. The Fred Lawrence Whipple Observatory is the largest field site of the CfA and is host to dozens of telescopes, including the pSCT and VERITAS for gamma-ray astronomy.

More than 1,400 scientists and engineers from 31 countries are engaged in the scientific and technical development of CTA. The planning for the construction of the Observatory is managed by the CTAO gGmbH, which is governed by Shareholders and Associate Members from a growing number of countries. CTA will be the foremost global observatory for very high-energy gamma-ray astronomy over the next decade and beyond and will be the first ground-based gamma-ray astronomy observatory open to the world-wide astronomical and particle physics communities. The scientific potential of CTA is extremely broad: from understanding the role of relativistic cosmic particles to the search for dark matter. With its ability to cover an enormous range in photon energy from 20 GeV to 300 TeV, CTA will improve on all aspects of performance with respect to current instruments.