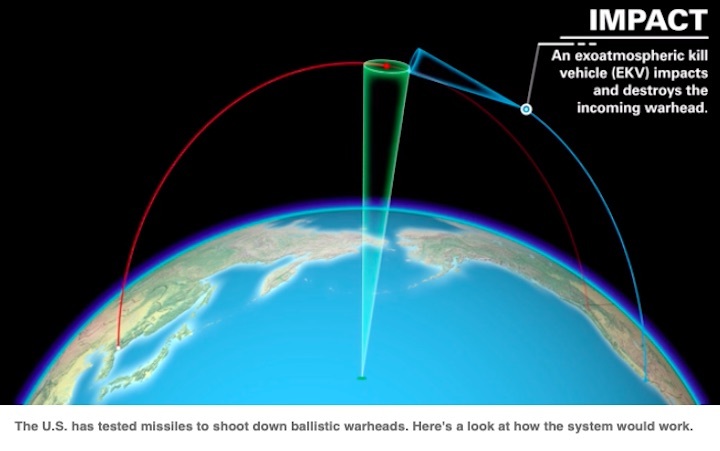 WASHINGTON — The long-delayed Missile Defense Review, which will be formally introduced by President Donald Trump at the Pentagon on Thursday, will call for research and investments to ensure America’s security for the next several decades: laser technology, the F-35 as an ICBM killer, and potentially putting interceptors in space.

Trump will roll out the report at 11 a.m. Thursday as part of his third visit to the Pentagon since taking office.

A senior administration official, speaking to reporters ahead of the report’s release, confirmed a number of new technologies that Defense News has learned are highlighted in the report. The official told reporters that overall, the review looks at “the comprehensive environment the United States faces, and our allies and partners face. It does posture forces to be prepared for capabilities that currently exist and that we anticipate in the future.”

It’s been a long road for the MDR to finally emerge. Pentagon officials originally said the document would be released in late 2017 — then February, then mid-May and then late in the summer. In September, Rood, who as undersecretary of defense for policy is the point man for the MDR, indicated the report could come out in a matter of weeks. And in October, Shanahan, then the deputy secretary of defense, said the document had been done “for some time.”

There is also widespread speculation in the missile defense community that the review has been delayed, at least in part, because of the warmed relations between the Trump administration and North Korea. Notably, the mid-May time frame for release, which was floated by Shanahan in April, lined up President Donald Trump’s planned meeting in Singapore with North Korean leader Kim Jong Un. While that meeting was canceled and then eventually happened in June, there was a sense the Pentagon did not want to do anything that could jeopardize those talks, such as releasing a report discussing how the U.S. could counter North Korean capabilities.

Ironically, Trump will be rolling the report out just hours before a high-level North Korean delegation is expected to arrive in Washington for talks with the administration. However, Sung-Yoon Lee, a Korean expert with Tufts University‘s Fletcher School, doesn’t expect that to impact any negotiations.

“North Korea has the upper hand and is playing hard to get,” Lee said, and so won’t make a big deal out of the MDR’s statements on North Korea.

“Their propaganda machinery at home may issue a statement a couple of days later, but [lead North Korean official Kim Yong Chol] would be foolish to address it while he’s in D.C," he added.

Much of the technology discussed in the MDR will require many years of development, and in some cases will never come to fruition. But the following points give a good sense of the let’s-try-everything approach the Pentagon is putting forth with the report:

Turn the SM-3 and F-35 into intercontinental ballistic missile killers: The SM-3 Block IIA ship-launched interceptor is designed for dealing with regional threats. But the Pentagon intends to test the weapon as a counter-ICBM system in 2020, as part of a goal of creating an extra layer of protection for the homeland. In essence, the department wants to offer as many options as possible, scattered around the globe, for making sure nothing gets through the safety net.

The department has previously said the F-35 could be used in some capacity for missile defense, but the MDR calls for the testing and development of a new or modified interceptor which could shoot down a ballistic missile in the boost phase; expect early R&D funding for such a weapon to be in the FY20 budget request. There is also the possibility of using the F-35, equipped with its array of sensors, to hunt and track mobile missile units, which is a key part of North Korea’s doctrine.

Lasers on drones: The idea of using directed energy weapons, more commonly known as lasers, to take out a missile in the boost phase is not new, but it has received a boost in the past year in comments from technological leaders inside the building. In theory, putting a drone equipped with a laser high in the air at around 60,000 feet would keep it safe from any missile defense systems, while providing overwatch on potential launch sites. However, this idea feels more far-flung than others, in part because both the scaled up laser that would be needed for such capabilities has yet to be invented, let alone paired with a system that would be able to stay that high for long periods of time.

In the meantime, DoD is developing a low-power laser demonstrator to evaluate and test what technologies would be needed to make such a system a reality, despite the fact that airborne laser weapons are perhaps the hardest directed energy system to develop.

Space-based sensors: In the FY19 defense authorization bill, Congress required the missile defense agency to fully study and prototype ways to increase the space-based sensor layer. It’s been another focus area for Griffin during his time in the Pentagon.

“A space-based layer of sensors is something we are looking at to help give early warning, tracking and discrimination of missiles when they are launched,” the administration official said. “We see space as an area that’s very important as far as advanced, next-level capabilities that will help us stay ahead of the threat.”

Just what that layer looks like, however, remains to be seen. Expect some form of disaggregated architecture, relying on many smaller systems rather than the expensive, highly-capable systems that the U.S. has traditionally relied upon. Hosting sensor payloads on commercial satellites could also be in play.

The hope is to demo some form of space-based sensor layer by early in the 2020s.

Space-based interceptors: Perhaps the most controversial of the ideas being considered in the document comes from the idea of having interceptors placed in orbit to take out ballistic missiles. Picture a satellite equipped with 10 rockets that, when triggered by the sensor net, can target and launch against an incoming missile.

The MDR does not call for investment in space-based interceptors at this point. Instead, the department will launch a study, lasting perhaps six months, to look into the most promising technologies and come up with estimates for cost and time; after the study is done, the department will look to move forward if it makes sense.

But don’t expect lasers in space anytime soon, with the administration official saying nothing has been determined, only that “we’re going to study it and we’ll see whether or not it’s feasible.”

Countering hypersonic weapons: A Defense Intelligence Agency report released this week said that China is leading the world with hypersonic weapons, systems capable of going at Mach 5 and able to move too quickly to be defeated by current generation missile defenses. Russia has also invested heavily in that technology. So it’s no surprise the MDR calls for investments in ways to protect against such weapons.

“That’s something we have been considering,” the official said. “We’ve done environmental impact study on three potential sites. So we’re ready to move forward if its determined that that’s something that would really enhance our posture with respect to Iran. But no decision has been made about a third interceptor site yet.”

One option noted in the MDR is to temporarily or permanently operationalize the Aegis Ashore Missile Defense Test Center in Kauai, Hawaii. That system is currently used just as a test facility.

The document, as ordered by Congress, must include milestone targets for developing new capabilities. It requires statements of five- and 10-year programmatic goals for developing capabilities, “as well as desired end states and milestones for integration and interoperability with allies, and a statement on the role of international cooperation,” per congressional guidance.

However, the new technologies presented as option in the report are not broken down in great detail in the report; those details are more likely to appear in the FY20 budget requests that correspond with the new capabilities.

A large potential change from the 2010 MDR that had been closely watched was whether the new document would call for a homeland defense capability that could defeat Russia and China.

Traditionally, America’s approach has been to focus on the ability defend against rogue states like Iran and North Korea, which could launch at most a handful of missiles at the homeland, or against one-off mistakes launched from Russia and China. To try to counter the overwhelming number of ICBMs those two nations could launch would be cost-prohibitive and, advocates of this approach argue, destabilizing.

However, the review does not shift the approach, saying instead that "United States still relies on nuclear deterrence to deter a potential Russian or Chinese nuclear attack,” the senior official said.

At the same time, the review pledges that the U.S. will not accept any limitation or constraint on the development or deployment of missile defense technologies the administration feels are needed to secure the safety of the American public – a line which may be seized upon by Russia or China as proof that the administration intends to impinge upon their own sovereignty.

While its homeland defense posture is very similar to the 2010 Obama review, the document presents a more aggressive posture with regional defense, calling for greater integration of missile defense into the strategic thinking abroad. Specifically, the review notes that missile defense systems can shape an adversary’s views of how effective missiles can be against the U.S. or its allies. The report calls for the ability to surge missile defense at times of crisis. 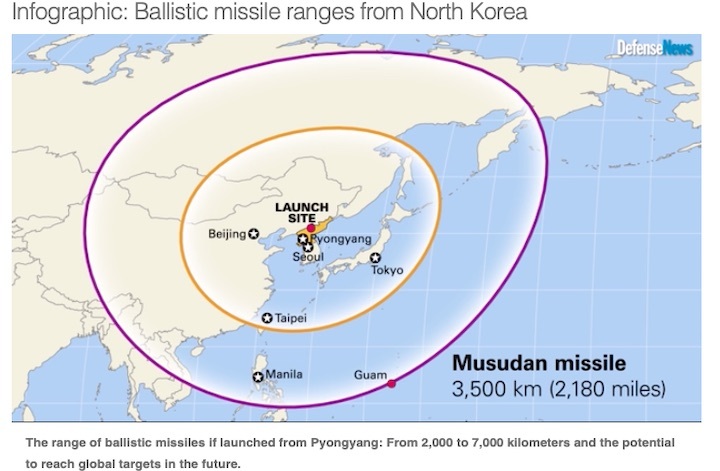 Fundamentally, the reports rests on the idea that missile defense systems are stabilizing forces, which change an opponent’s calculus and reduces the risk. That has been a controversial opinion in the past, with nonproliferation advocates like Laura Grego of the Union of Concerned Scientists saying missile defense systems simply encourage adversaries to try to top them.

“For every defensive measure, the adversary will take steps to overcome those defenses," Grego said. “A potential adversary is likely to increase the numbers and types of nuclear-armed missiles if worried about missile defense undermining the credibility of their nuclear deterrent.”

"Militaries plan decades in advance for what they think they need, and China and Russia will likely plan for the worst-case scenarios, where there’s no treaty constraint or political constraint on US missile defenses,” she said.

However, advocates of missile defense such as Rebeccah Heinrichs of the Hudson Institute, believe the absence of strong U.S. defenses emboldens potential adversaries and gives them a bargaining chip over America.

“Missile defense can contribute to deterrence if they can increase our enemies' uncertainty in their ability to successfully hit their intended target. The more we can convince the enemy that their initial attack will not be worth the cost, the more effectively we can deter that attack in the first place,” she said. “Plugging that gap has a stabilizing effect, remaining vulnerable is not a stable situation and it gives our adversaries an advantage we should not allow them to have.”