China looks set to perform the first global space launch of 2019 from the Xichang Satellite Launch Centre on Thursday, after topping the launch tables for the first time last year.

Liftoff of the Zhongxing-2D (ChinaSat-2D) communications satellite atop an enhanced Long March 3B launch vehicle is expected to take place around 17:11 on January 10 (01:11, January 11 Beijing time), according to airspace closure notifications issued Wednesday.

The launch aims to put the satellite into a geostationary transfer orbit with the satellite later arriving into an orbit 35,786 km above the Earth, giving it a fixed position relative to the Earth.

It will be China's first launch since December 29—China's 39th and the world's last of 2018—and first by any country in 2019. SpaceX could follow with the Falcon 9 Block 5 launch of the Iridium NEXT 66-75 mission on Friday.

Vertical integration of the enhanced Long March 3B at Xichang Satellite Launch Centre for the November 2018 launch of the Beidou-3 G1Q satellite. CNS

Zhongxing-2 series satellites could be second generation Shentong geostationary military communication satellites, according to Nasaspaceflight.com, and are likely based on the DFH-4 communications satellite platform developed under the China Academy of Space Technology (CAST).

The China Academy of Launch Vehicle Technology (CALT), which developed the hypergolic rocket, has been developing measures including parachutes to help reduce the risk from the launches.

China's first three launch sites were established during the Cold War, with Jiuquan and Taiyuan constructed deep inland for security reasons. These included tensions with the Soviet Union spilling over into border skirmishes and the United States considering preemptive strikes against China on sites linked to nuclear weapon launch capabilities.

China has not yet released an overview of its launch plans for 2019, but major missions are expected to include the return-to-flight of the Long March 5 (now Q2) and subsequent Chang'e-5 lunar sample return mission using the same heavy-lift launcher late in the year.

Also expected are the first launch of a New Generation Recoverable Satellite, the debut of Jielong microlauncher and first sea launch for the Long March 11, while private companies OneSpace and iSpace will attempt their first orbital launches.

China launched 39 times last year, having already smashed its national record of 22 launches, set in 2016, back in August. This put China ahead of the United States and Russia in the annual launch table for the first time.

CASC, the main Chinese space contractor, stated at the start of the year that it was targeting around 35 launches and finished with 37, all successful, with the Chang'e-4 lunar far side mission as the standout.

The launch rate is partly explained by needing to launch space infrastructure which the other two already have on-orbit, as well as catching up with delayed missions. China had aimed for around 30 launches in 2017, but managed just 18. 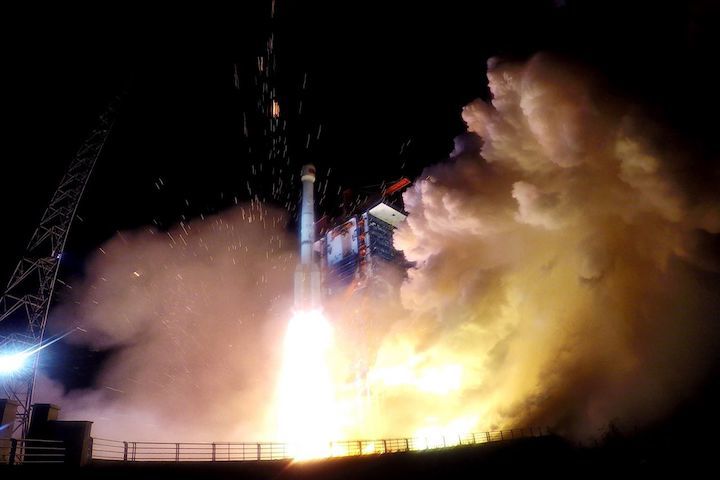 China successfully carried out the first launch of the year Thursday with the lofting of the Zhongxing-2D communications satellite to geostationary transfer orbit.

Little is known about the payload, also known as ChinaSat-2D, which was described tersely by Xinhua as a Chinese-made communication and broadcasting satellite designed to, "provide transmission service for the country's radio, television stations and cable television networks."

Nasaspaceflight.com meanwhile notes that the satellite may belong to a second generation of communication satellites for military applications.

Another institute under CASC, the China Academy of Launch Vehicle Technology (CALT), developed the hypergolic, expendable Long March 3Brocket used for the mission.

The Long March 3 series will soon be in action again at Xichang as China continues its push to complete its Beidou navigation and positioning system, a rival to GPS of the United States.

A Long March 3B early last month launch the Chang'e-4 lunar lander and rover, which touched down on the far side of the Moon on January 3.

China has not yet released any indication of the number of launches it plans to carry out in 2019, which will follow on from a national record 39 times(including one failure) last year.

Vertical integration of the enhanced Long March 3B at Xichang Satellite Launch Centre for the November 2018 launch of the Beidou-3 G1Q satellite. CNS