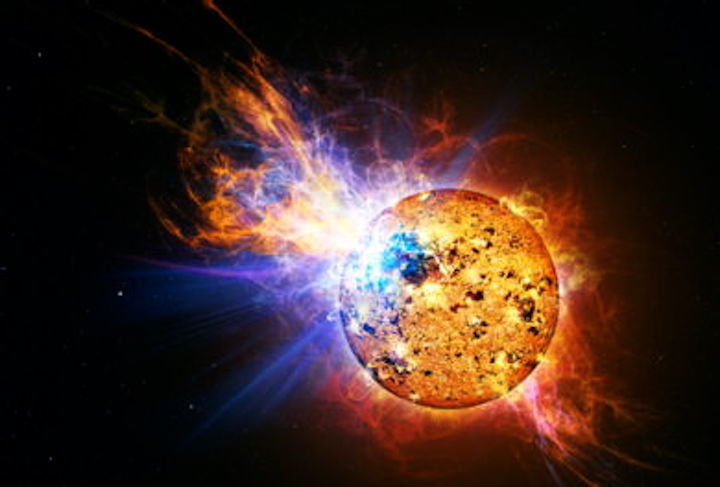 A massive stellar flare on a baby star has been spotted by University of Warwick astronomers, shedding light on the origins of potentially habitable exoplanets.

One of the largest ever seen on a star of its type, the huge explosion of energy and plasma is around 10,000 times bigger than the largest solar flare ever recorded from our own Sun.

The discovery is detailed in a paper for the Monthly Notices of the Royal Astronomical Society and reveals how this huge ‘tantrum’ could even perturb the material orbiting a star which would create the building blocks for future planets.

The flare was seen on a young M-type star named NGTS J121939.5-355557, located 685 light years away. At around 2 million years old, it is what astronomers refer to as a pre-main sequence star which is yet to reach the size that it spends the majority of its lifecycle.

It was observed as part of a large flare survey of thousands of stars by University of Warwick PhD student James Jackman, as part of a project searching for explosive phenomena on stars outside our solar system. He used the Warwick-led Next-Generation Transit Survey (NGTS) telescope array in Chile which is designed to find exoplanets by collecting brightness measurements of hundreds of thousands of stars and is based at the European Southern Observatory's Paranal Observatory. His attention was drawn to NGTS J121939.5-355557 as it had one of the largest flares seen in these types of stars.

A stellar flare occurs when the magnetic field of a star rearranges itself, releasing huge amounts of energy in the process. This accelerates charged particles, or plasma, within the star which crash into its surface, heating it up to around 10,000 degrees. That energy produces optical and infra-red light, but also x-rays and gamma rays that can be picked up by telescopes on Earth and in orbit.

Magnetic fields on M stars are a lot stronger than those on our own sun and the astronomers calculated that this size of flare is a rare event, occurring anywhere from every three years to twice a decade.

James, who is studying in the University of Warwick’s Department of Physics, said: “This is normally a star that shows little activity and stays a constant brightness. Then, on this one particular night, we saw it suddenly grow seven times brighter than normal for a few hours, which is pretty extreme. And then after that it goes back to normal.

“We see these types of flares on the Sun, but no-where near as big as this. On our Sun, you can do incredibly detailed studies on this kind of activity. It’s difficult to extend that understanding to other stars because the data we need hasn’t been available until now.

“This is an incredibly young star, only about 2 million years old. You’d call it a baby – it’s going to live for ten of billions of years, so it’s in the first one percent of its lifetime. Even though it’s much cooler than our Sun by about 2000 degrees it is roughly the same size, but pretty large for an M star. This is because it’s still being formed from gas in the disc and contracting and cooling until it reaches the main sequence, staying at a certain radius and luminosity for billions of years.

“Finding out these kinds of details has only been possible thanks to the Gaia mission that began earlier this year.”

The X-rays from these large flare events are thought to affect the formation of ‘chondrules’, flash-melted calcium-aluminium-rich grains in the star’s protoplanetary disc. These gather together into asteroids that eventually coalesce into orbiting planets. The study adds to our understanding of how flares ‘perturb’ the protoplanetary disc, moving around the material that impacts on planet formation and affecting the eventual structure of a planetary system.

Professor Peter Wheatley, James’s PhD supervisor, said: “A massive flare like this could be advantageous for planet formation, or it could be disruptive. This particular star won’t have formed its planets yet so this type of flare activity is something that astronomers will need to take into account when considering planet formation.

“There’s a discussion at the moment around whether flares are a good or bad thing for life on orbiting habitable planets, because they output a large amount of UV radiation. That could cause biological damage to surface organisms and damage their DNA. On the other hand, UV radiation is required for various chemical reactions to start life and that’s not typically provided in great enough quantity by these types of stars. These flares could potentially kickstart these reactions.”