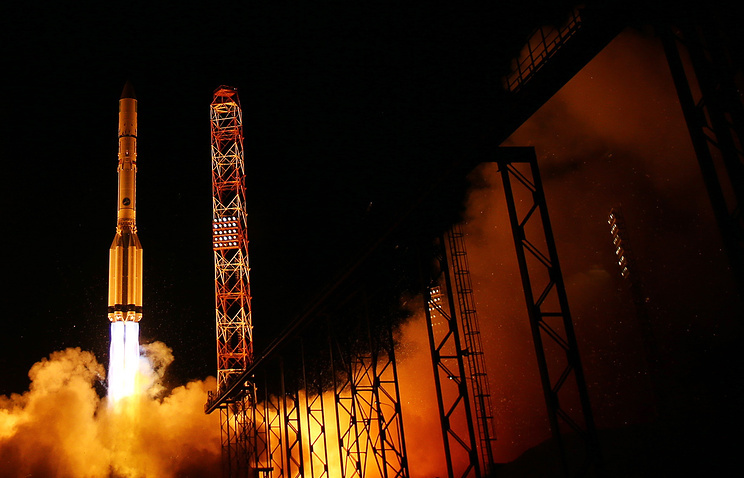 The launch of the third Blagovest military communications satellite is planned for December 21 from the Baikonur Cosmodrome in Kazakhstan, a source in the domestic space industry told TASS on Thursday.

"The launch of the Blagovest satellite is planned for December 21 from the Baikonur Cosmodrome aboard a Proton-M carrier rocket," the source said.

A final decision on the date and on the launch will be made by the state commission, the source said.

A source in the space industry earlier told TASS that the Blagovest might be launched in the third ten-day period of December but declined to specify the date.

Head of the Reshetnev Information Satellite Systems Nikolai Testoyedov earlier told TASS that the company would manufacture two Blagovest military satellites at the end of this year and at the beginning of 2019, correspondingly.

According to him, both satellites are expected to be launched by a Proton-M booster from the Baikonur Cosmodrome. The launch of the fourth Blagovest satellite is planned for the first quarter of 2019, if the state commission makes the corresponding decision.

The first Blagovest military satellite, the Kosmos-2520, was launched from the Baikonur spaceport on August 17, 2017. The second satellite of this series, the Kosmos-2526, was launched on April 19, 2018 from the Baikonur Cosmodrome. Initially, its liftoff was planned for December 25, 2017 but was rescheduled due to problems with an onboard device.

Russia’s Defense Ministry plans to deploy a grouping of four Blagovest satellites by 2020. These satellites are designed to provide high-speed access to the Internet, transmit data and offer telephone and video conference communications using the advanced Ka-and Ku-band frequencies. 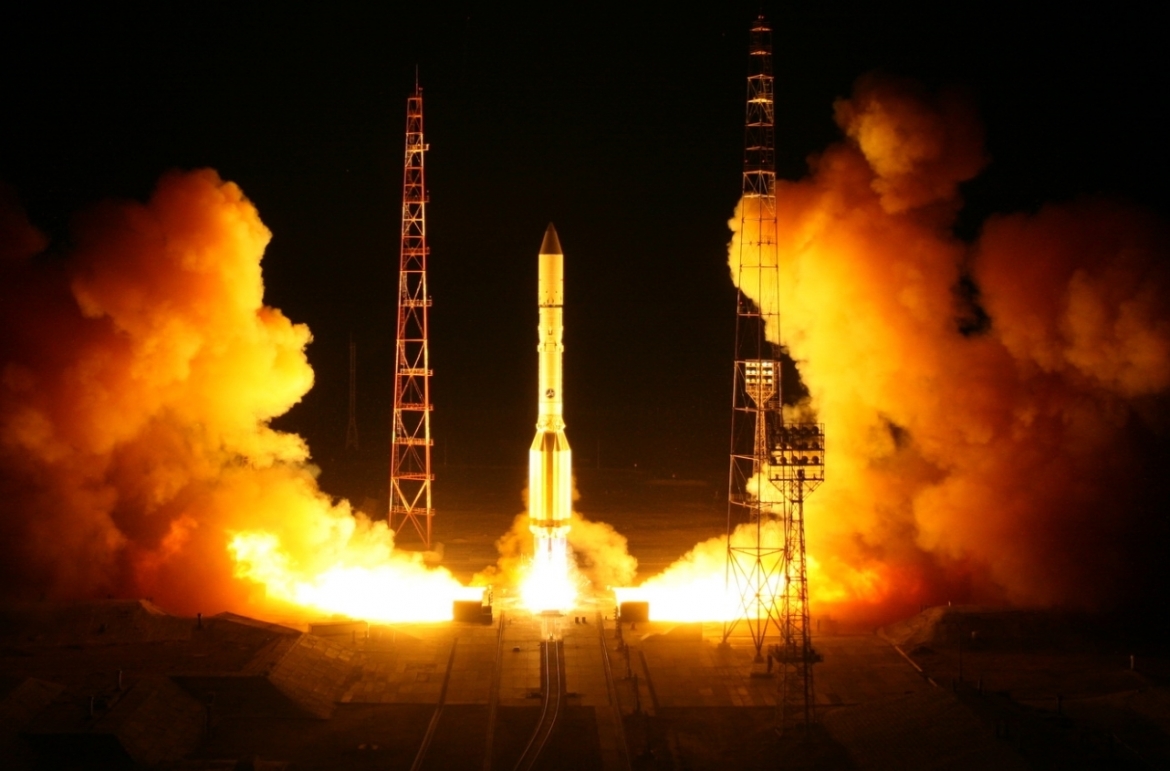 Russia launched a military communications satellite Friday morning, with a Proton-M/Briz-M rocket lifting off from the Baikonur Cosmodrome to deploy Blagovest No.13L into geostationary orbit. Launch occurred on time at 05:20 local time (00:20 UTC), although it will be nine hours before Proton’s payload separates into its final orbit.

Blagovest No.13L is the third satellite to be launched for Russia’s Blagovest communications system. Designed to provide dedicated satellite links between the country’s military bases, Blagovest spacecraft are equipped with Ka and Q-band transponders. The satellites are intended for dual military and civilian use, supporting commercial telephony, high-speed internet and broadcasting services, although the military role is their primary mission.

The Russian Ministry of Defence intends to deploy a constellation of at least four Blagovest into geostationary orbit, using slots at 45 and 128 degrees East. The spacecraft have been constructed by ISS Reshetnev and are based around the Ekspress 2000 platform. While their military nature means that few details of their capabilities have been made public, it is understood that each satellite is expected to operate for at least fifteen years.

The first Blagovest satellite, No.11L – now named Kosmos 2520, was launched in August 2017 and is positioned in the 45-degree-East slot of the constellation. Blagovest No.12L, or Kosmos 2526, followed in April and was placed at 128 degrees East.

After deployment Blagovest No.13L will be renamed under the system of Kosmos designations that are applied to most of Russia’s military spacecraft. Under this system of sequential numbers dating back to 1962, the satellite is expected to become Kosmos 2353 – although this will not be confirmed until the satellite is safely in orbit. If November’s Rokot launch carried more satellites than have been officially announced, Blagovest could be given a higher Kosmos number. 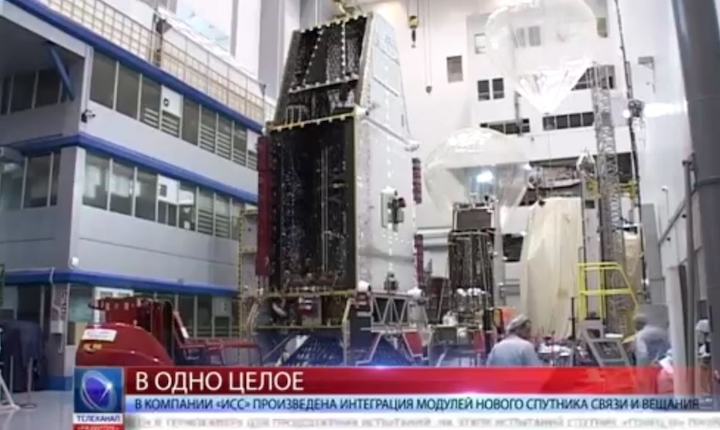 The name Blagovest comes from a type of bell peal used in the Eastern Orthodox Church and is often translated as “Good News”.

The satellite rode to orbit atop a Proton-M carrier rocket equipped with a Briz-M upper stage. The same type of rocket used to deploy the two Blagovest satellites already in orbit, Proton lifted off Pad 24 at Site 81 of the Baikonur Cosmodrome on an easterly course. The three-stage Proton boosted Briz-M and the payload into space on a suborbital trajectory, with Briz-M then firing to reach an initial parking orbit. Additional Briz-M burns over the coming hours will lead up to spacecraft separation about nine hours after liftoff.

Friday’s launch is the first flight Proton has made for over eight months, its last mission having been the successful deployment of the previous Blagovest satellite in April. Proton has been an able workhorse of the Russian – formerly Soviet – space program and the commercial space industry, but in recent years a combination of reliability concerns and increased competition have seen its share of the launch market dry up.

Proton evolved from the UR-500, a gigantic two-stage intercontinental ballistic missile designed by Vladimir Chelomei as part of the Universalnaya Raketa – Universal Rocket – family of missiles and carrier rockets. Although never used as a missile, UR-500 proved suited to launching heavy satellites into orbit and was soon optimized for the role with the three-stage Proton-K first flying in March 1967, less than two years after the UR-500’s first launch. While nominally consisting of three stages, Proton is often used with an additional upper stage to access higher orbits.

The Proton-M that flew Friday’s mission is a modernized version of the Proton-K. First flown in 2001, the Proton-M incorporated upgrades including more powerful engines, digital flight controls and weight reductions. After a transitional period when both versions were flying, Proton-K was retired in 2012.

Russia’s Angara 5 rocket is intended as the long-term replacement for Proton. Angara 5 flew on an initial test flight in December 2014, five months after a suborbital test of the smaller Angara 1, however neither version of the rocket has yet placed a functional payload into orbit. Russia currently aims to be in a position to retire Proton by the mid-2020s.

Friday’s launch began with liftoff from Pad 81/24 at Baikonur. This is one of four Proton launch pads at Baikonur, although only it and Pad 200/39 remain in use. Proton rockets are assembled horizontally before being transported to the launch pad and erected in position. Proton was rolled out on Monday in preparation for the Blagovest launch.

Proton’s ignition sequence began two and a half seconds before launch, with the first stage’s six RD-276 engines roaring to life three quarters of a second later. The engines built up to full thrust before Proton lifted off to begin its mission. Climbing away from Baikonur, it took Proton about a minute to reach the point of maximum dynamic pressure, the point in its flight where the combination of velocity and outside air density produces peak mechanical stress on the vehicle.

The first stage burned for about two minutes. Just before it burned out, the four second stage engines ignited and the two stages separated. This “fire in the hole” stage separation, where the second stage is started while the first stage is still thrusting, is normal for Proton and several other Russian vehicles, with the latticework interstage at the top of the first stage designed to allow exhaust gasses to be vented.

The second stage is powered by three RD-0210 engines and an RD-0211. The RD-0211 is almost identical to the RD-0210s but incorporates a gas generator that is used to keep the propellant tanks pressurized. These burned for about three and a half minutes before the third stage RD-0212 propulsion system – consisting of an RD-0213 main engine and RD-0214 vernier – took over to continue the ascent. Twenty seconds into the third stage’s four-minute, 15-second burn Proton’s payload fairing separated.

Shortly after the end of Proton’s third stage burn, Briz-M separated from the third stage. The Briz-M upper stage is powered by an S5.98 engine and can make multiple burns, allowing complex flight profiles such as the one that is being used for Friday’s launch. Its first burn will begin about a minute and a half after separation, firing for four minutes to complete insertion into a parking orbit.

Over the next nine hours, Briz will make three more burns: these will initially raise the orbit’s apogee to an intermediate altitude, and then to a geosynchronous transfer orbit. After jettisoning its auxiliary propellant tank, Briz-M’s fourth and final burn will raise the orbit’s perigee and decrease its inclination, leaving Blagovest in geostationary orbit. Spacecraft separation will occur shortly after the end of the fourth burn.

Friday’s launch is expected to be Russia’s penultimate launch of 2018, with a Soyuz launch from the Vostochny Cosmodrome expected to close out the year next week. This will deploy a pair of Kanopus remote sensing satellites and secondary payloads.

The next Proton launch is currently scheduled for April, when a Proton-M with a Blok DM-03 upper stage will deploy the Spektr-RG x-ray observatory. Further Proton launches next year are scheduled with commercial communications satellites, military spacecraft and – at the end of November – the Nauka module of the International Space Station. The next Blagovest satellite will launch atop a Proton in the second quarter of the year. 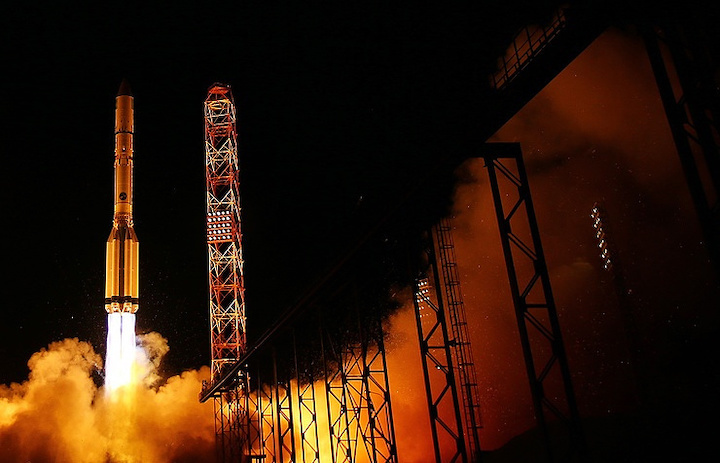 MOSCOW, December 21. /TASS/. A Proton-M carrier rocket was launched from the Baikonur space center in Kazakhstan on Friday to put into orbit a satellite for the Russian Defense Ministry, the ministry’s press service said.

All pre-launch procedures and the blastoff proceeded as normal.

"At 03:20 Moscow time on Friday, December 21, a heavy Proton-M carrier rocket with a spacecraft for the Russian Defense Ministry was launched from the Baikonur space center (Kazakhstan)," the press service said.

"The upper stage of the Proton-M rocket, comprising the Briz-M booster and the Russian Defense Ministry’s spacecraft, separated as scheduled, at 03:30 Moscow time," the Defense Ministry said.

Putting the spacecraft into the designated orbit will take several hours.
Quelle: TASS
+++ 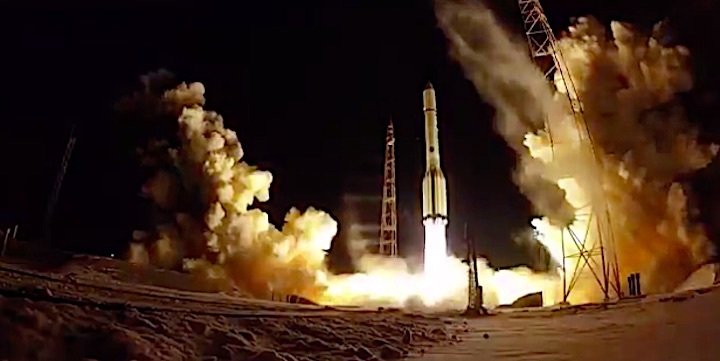 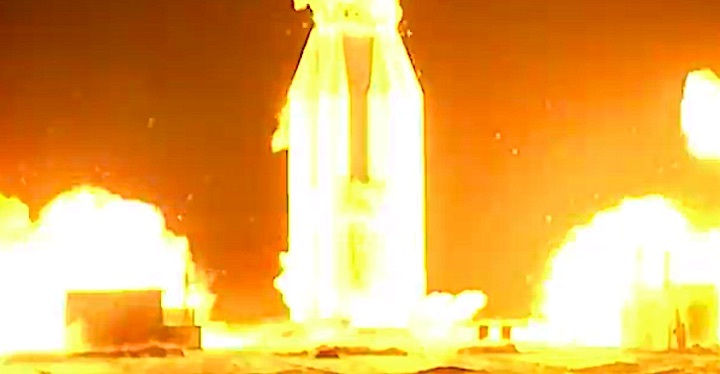 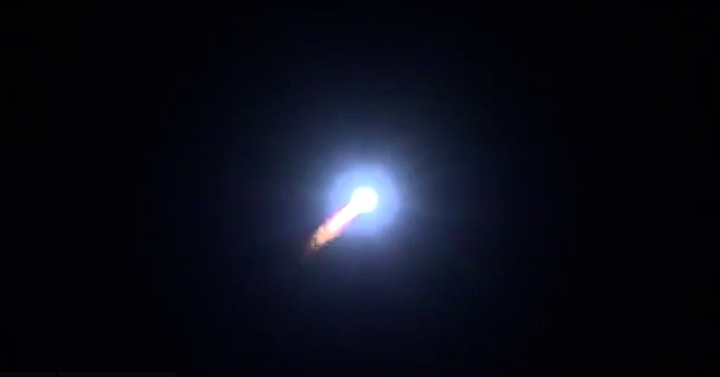