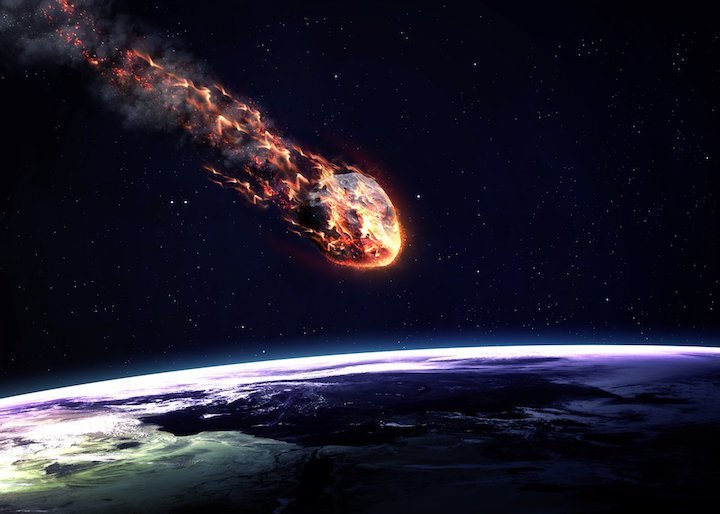 Since there aren't any images of the Greenland fireball, here's an illustration of a space rock burning up as it enters Earth's atmosphere.Credit: Vadim Sadovski/Shutterstock

WASHINGTON — When a blazing fireball from space exploded over Earth on July 25, scientists captured the first-ever seismic recordings of a meteor impact on ice in Greenland.

At approximately 8 p.m. local time on that day, residents of the town of Qaanaaq on Greenland's northwestern coast reported seeing a bright light in the sky and feeling the ground shake as a meteor combusted over the nearby Thule Air Base.

But the fleeting event was detected by more than just human observers, according to unpublished research presented Dec. 12 here at the annual conference of the American Geophysical Union (AGU).

Seismographic equipment, which had been installed near Qaanaaq just a few months earlier to monitor how ground shaking affected the ice, also recorded the fiery meteor blast. The Qaanaaq fireball provided scientists with the first evidence of how an icy environment — and, possibly, a distant ice-covered world — could respond to a meteor impact.

The first sign of the meteor was a brilliant flash in the sky over Greenland; the meteor was at its brightest at an altitude of approximately 27 miles (43 kilometers) above the ground, and it was traveling at nearly 54,000 mph (87,000 km/h), according to the International Meteor Organization (IMO). [Top 10 Greatest Explosions Ever]

When the meteor exploded over Thule Air Base, the U.S. Air Force's northernmost base, it was like a bomb going off. With a calculated impact energy of 2.1 kilotons of TNT, this blast was the second-most-energetic fireball of the year, Live Science previously reported. A map of the impact site was shared on Twitter on July 31 by Ron Baalke of the Solar System Dynamics group at NASA's Jet Propulsion Laboratory (and a "space explorer," as he describes himself in his Twitter bio). 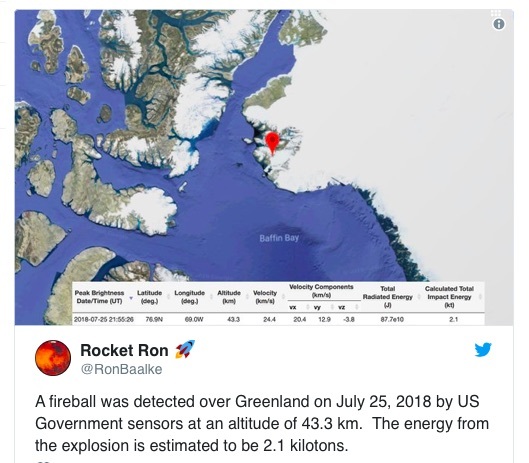 Researchers with the Seismometer to Investigate Ice and Ocean Structure (SIIOS) at the University of Arizona had installed an array of seismometers about 43 miles (70 km) north of Qaanaaq. Recordings captured by the seismic sensors were interpreted by two Danish Seismological Network broadband stations in Greenland: TULEG (Station Thule) and NEEM (Station Eemian). The scientists were then able to identify a seismic event that matched the arc of the traveling ground waves and estimate the impact point of the fireball, the researchers reported at AGU.

They pinpointed the epicenter of the event near Humboldt glacier on the Greenland ice sheet, and seismic equipment picked up tremors from the impact location as far as 218 miles (350 km) away.

But their findings also have implications that extend beyond Earth. This seismic event was the first-ever recorded analog for impact events on ice-covered worlds — such as frozen Europa, which is a moon orbiting Jupiter, and frigid Enceladus, an icy moon of Saturn — and these findings "will inform impact science across objects throughout the solar system," the researchers said.