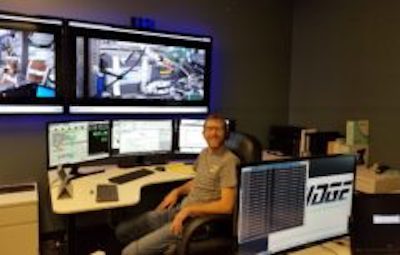 Cape Canaveral, Florida – This weekend, Dragon, the spacecraft from the sixteenth SpaceX contracted resupply mission, berthed with the International Space Station carrying educational experiments, CubeSats, and industry science research from NanoRacks’ customers into orbit. Within this mission, the NanoRacks team delivered payloads for four of the Company’s commercial platforms on Space Station.

NanoRacks delivered five CubeSats to be deployed from the Company’s commercially developed CubeSat Deployer on the Space Station. These CubeSats are:

UNITE and TechEdSat-8 were both selected for flight by NASA’s CubeSat Launch Initiative (CSLI) and were the two satellites launched for the Educational Launch of Nanosatellites-21 (ELaNa-21) mission complement, sponsored by the NASA Launch Services Program (LSP).

Additionally, Tympanogen Inc. a startup company which develops innovative ear, nose, and throat devices based on proprietary gel technology, launched their first experiment to the Space Station leveraging NanoRacks Reactor Microplates in the microgravity environment. Tympanogen seeks to improve the process of antibiotic gel release from a novel patch created to treat wounds and reduce the occurrence a severity of sepsis – or systemic inflammation.

DreamUp will also be producing its second educational science kit (“DreamKits”) based on the results found in the BASF Plants in Space experiment. This DreamKit will allow learners on the ground who purchase a kit to replicate and compare results to the experiment currently being conducted on the Space Station.

Lastly, NanoRacks facilitated the launch of a virtual reality camera for Felix & Paul Studios, an award-winning creative studio, to capture footage for a groundbreaking cinematic virtual reality series documenting life onboard the space station in partnership with TIME.

Since Dragon arrived on Saturday, the NanoRacks Operations Team has been working around the clock to run customer payloads with the astronaut crew on board. Astronaut David Saint-Jacques installed Plants in Space and Staying Healthy in Space onto the NanoRacks Frame-1. Astronaut Anne McClain performed the NanoRacks MixStix operations for the student experiment from Space Center Houston, and just an hour later performed the first day’s activation of the Tympaongen experiment, running NanoRacks Plate Reader-2 scans of the experiment’s Reactor Microplates.

“We’re certainly keeping the astronaut crew very busy on board,” says NanoRacks Operations Engineer Kyle Warner. “It’s been a blast managing so many simultaneous experiments from the ground in our BRIDGE operations center, and we’re thankful to NASA’s Astronaut Crew Office for working with us to provide crew time for our biological and medical experiments almost immediately after they arrived on Station.”