Discovery is the first detailed observation of the environs of a massive black hole outside the Milky Way, say researchers from the GRAVITY group 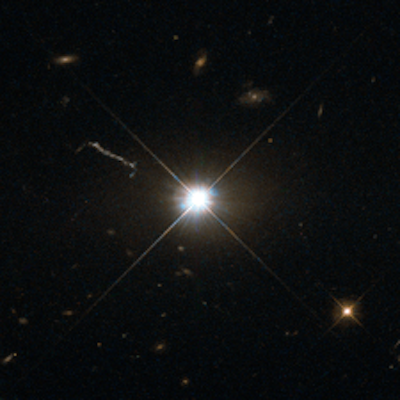 In 1963, astronomer Maarten Schmidt identified the first quasi-stellar object or "quasar," an extremely bright but distant object. He found the single quasar, the active nucleus of a far-away galaxy known to astronomers as 3C 273, to be 100 times more luminous than all the stars in our Milky Way combined.

Now, the GRAVITY international team of astronomers, including Prof. Hagai Netzer of Tel Aviv University's School of Physics and Astronomy, have concluded that gas clouds rapidly moving around a central black hole form the very heart of this quasar. The results of the new research were published in Nature on November 29.

The first measurement of the mass of the black hole inside 3C 273, using an older method, was conducted at the TAU's Florence and George Wise Observatory in 2000, as part of PhD research conducted by TAU's Dr. Shai Kaspi, then a student in Prof. Netzer's group. This result has now been corroborated by GRAVITY's observations.

The research is the first detailed observation outside of our galaxy of gas clouds whirling around a central black hole. According to the researchers, GRAVITY's measurements will become the benchmark for measuring black hole masses in thousands of other quasars.

Taking a closer look at a black hole

The GRAVITY instrument, situated in Paranal, Chile, has unprecedented capabilities. It combines the collective area of four telescopes to form a virtual telescope, called an interferometer, 130 meters across. The instrument can detect distant astronomical objects at an extremely high resolution.

"Quasars are among the most distant astronomical objects that can be observed," Prof. Netzer says. "They also play a fundamental role in the history of the universe, as their evolution is intricately tied to galaxy growth. While almost all large galaxies harbor a massive black hole at their centers, so far only one in our Milky Way has been accessible for such detailed studies."

"GRAVITY allowed us to resolve, for the first time ever, the motion of gas clouds around a central black hole," says Eckhard Sturm of Max Planck Institute for Extraterrestrial Physics (MPE), who co-led the research for the study. "Our observations can follow the motion of the gas and reveal that the clouds do whirl around the central black hole."

So far, such observations had not been possible due to the small angular size of a quasar's inner region — roughly the size of our solar system, but some 2.5 billion light years distant from us.

"Broad emission lines created by gas in the vicinity of the black hole are observational hallmarks of quasars. Until now, the distance of the gas from the black hole, and occasionally the pattern of the motion, could only be measured by an older method that made use of light variations in the quasars," Prof. Netzer says. "With the GRAVITY instrument, we can distinguish structures at the level of 10 micro-arc seconds, which corresponds to observing, for example, a 1-Euro coin on the Moon."

"Information about the motion and distance of the gas immediately around the black hole is crucial to measuring the mass of the black hole," explains Jason Dexter, also of MPE, who co-led the research. "For the first time, the old method was tested experimentally and passed its test with flying colors, confirming previous estimates of about 300 million solar masses for the black hole."

"This is the first time that we can study the immediate environs of a massive black hole outside our home galaxy, the Milky Way," concludes Reinhard Genzel, head of the infrared research group at MPE. "Black holes are intriguing objects, allowing us to probe physics under extreme conditions — and with GRAVITY we can now probe them both near and far."

Image: Optical image of the quasar 3C 273 (the bright stellar-like object in the center) obtained with the Hubble Space Telescope. It was the first quasar ever to be identified. Photo courtesy of NASA.