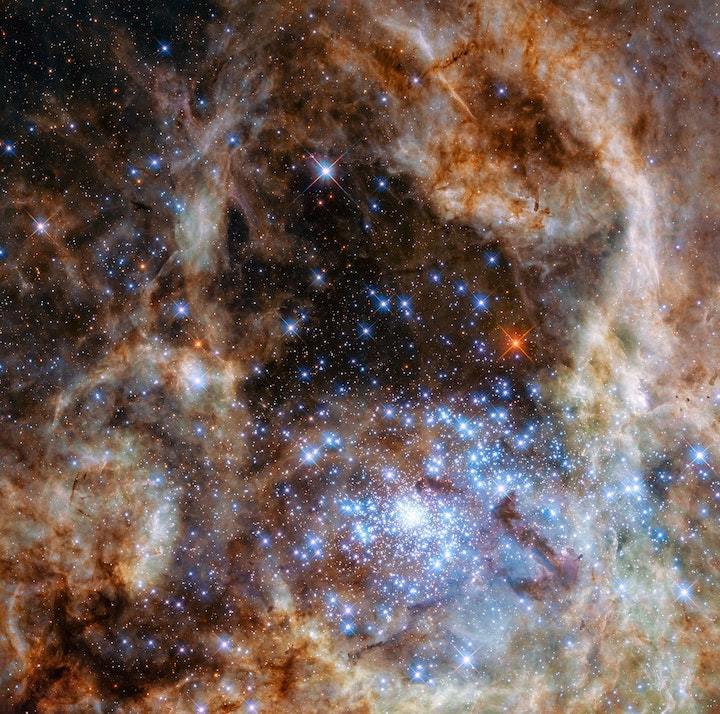 The Trantula Nebula, with the R136 star-forming region visible in the lower righthand quadrant.

The cluster has recently been the focus of intense research by a team led by astronomer Roland Crocker. By using data gathered by NASA/ESA Hubble Space Telescope the scientists have been able to answer a fundamental question of cosmology: How come planets potentially suitable for the emergence of life develop?

The question might best perhaps be framed differently: what acts to balance the otherwise destructive force of gravity in the development of young stars?

“If star formation happened rapidly, all stars would be bound together in massive clusters, where the intense radiation and supernova explosions would likely sterilise all the planetary systems, preventing the emergence of life,” says Crocker.

“The conditions in these massive star clusters would possibly even prevent planets from forming in the first place.”

In a paper published in the Monthly Notices of the Royal Astronomical Society, the researchers demonstrate that the newly formed stars themselves generate another force that works to counterbalance gravity.

The stars coalesce from clouds interstellar dust and gas. As they do so, they radiate both ultraviolet and optical light. This collides with the remaining dust, causing the scattering of infrared light – which exerts pressure against gravity.

“The phenomenon we studied occurs in galaxies and star clusters where there’s a lot of dusty gas that is forming heaps of stars relatively quickly,” Crocker explains.

“In galaxies forming stars more slowly – such as the Milky Way – other processes are slowing things down. The Milky Way forms two new stars every year, on average.”

The interaction between the two forces, he added, represents “a form of feedback that helps to keep the Universe alive and vibrant”.