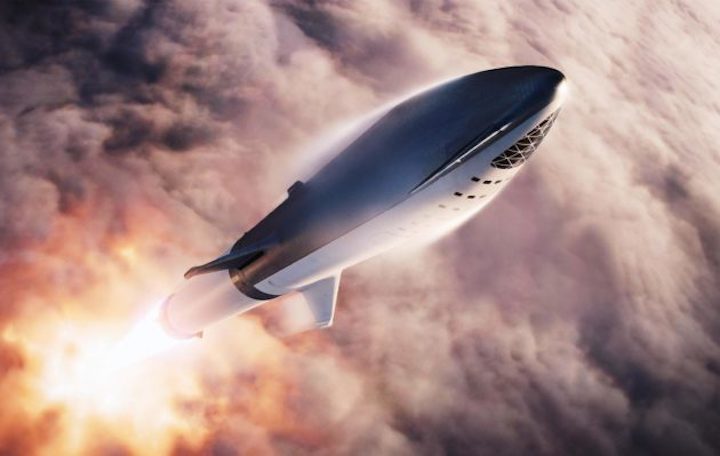 Tonight SpaceX CEO Elon Musk announced the latest name for the spaceship that he says SpaceX aims to use to deliver a million people to Mars, send a Japanese billionaire and an assortment of artists around the moon and back, carry passengers on supersonic trips around the globe, and basically do everything big that needs to be done in space.

The name change comes just days after Musk tweeted that the design for the spaceship is being radically revised once again. “New design is very exciting! Delightfully counter-intuitive,” he wrote.

Musk hasn’t yet shared details on the design, but he did discuss the new nomenclature for the upper-stage spaceship and its mammoth first-stage booster. Here’s how it all went down on Twitter: 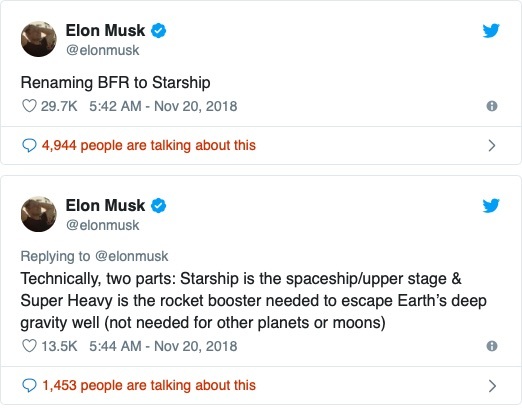 “Starship” is a defensible name not only because of Musk’s aspirational goal of going to other star systems, but also because it fits with other angles of the SpaceX story — such as “Starman,” the mannequin that SpaceX sent to deep space on its maiden Falcon Heavy launch in February; and “Starlink,” the broadband satellite network that Musk hopes will generate the money needed for a city on Mars.

Musk’s current timetable calls for Grasshopper-style suborbital test flights of the Starship to begin next year at SpaceX’s yet-to-be-completed spaceport in South Texas. The first full-scale uncrewed flight to Mars is targeted in 2022, with the first crewed flight slated for 2024.

But those are aspirational goals, and if you know anything about Musk and SpaceX, you know that schedules sometimes change.

Names sometimes change, too: There’s plenty of time for the Starship to take on a new moniker before its first launch. Back in 2016, when it was still known as the ITS, Musk suggested calling the first Mars-bound spaceship “Heart of Gold” in honor of the flagship for the late humorist Douglas Adams’ “Hitchhiker’s Guide to the Galaxy.”

“I like the fact that it’s driven by infinite improbability,” he said of the fictional starship, “because I think our ship is also extremely improbable.”

One thing’s for sure: Now that construction has started, SpaceX’s Starship seems less infinitely improbable than it did two years ago.