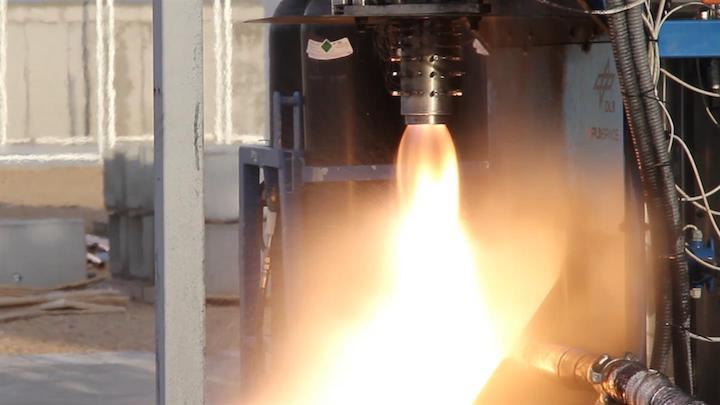 Whether alone or in a constellation, small satellites weighing from just a few kilograms (nanosatellites) up to several hundred kilograms (micro- and minisatellites) are becoming increasingly technologically sophisticated and have the potential to fundamentally change the space industry. In the coming years, hundreds of such small satellites will be carried into Earth orbit. As part of the EU project SMILE (Small Innovative Launcher for Europe), researchers from the Institute of Structures and Design at the German Aerospace Center (Deutsches Zentrum für Luft- und Raumfahrt; DLR) have developed a reusable rocket engine especially for launching such satellites, and have performed an initial series of successful trials on a test rig.

Until now, small satellites have tended to be carried into space aboard large rockets, if there is enough room for them. The primary aim of these flights is to place large satellites in a specific orbit. Small satellites take second place as far as timing and target orbit are concerned. For this reason, 14 European research institutions and companies are working on designing an economical rocket launcher within the SMILE project. This should enable small satellites weighing up to 70 kilograms to be carried to near-Earth orbits. The project focuses on the technology required for propulsion, on-board electronics and cost-effective production.

3D printing as a success factor

The rocket engine, developed by DLR scientists specifically for this application, consists of two central components – the metal injector head and the ceramic combustion chamber. Belgian project partner 3D Systems manufactured the prototype injector out of a nickel-chromium alloy using metal 3D printing. 3D printing is an additive process. Digital design data is used to build up or rather print the desired structure in layers by depositing material. "Thanks to this relatively new manufacturing technology, we need significantly fewer parts and process steps, which speeds up the manufacturing process for the injector and reduces production costs. At the same time, we have been able to significantly reduce the mass of the components, which is always a very important factor in aerospace applications," says Markus Kuhn, responsible for the project at the DLR Institute of Structures and Design in Stuttgart.

Combustion chamber made of high-performance ceramics

The researchers used a special high-performance material for the combustion chamber – a carbon fibre-reinforced ceramic that consists mainly of silicon carbide and was developed primarily at the DLR institute in Stuttgart. It is particularly well-suited for high-temperature applications and reliably withstands even extreme temperature changes. "Reusability was an important consideration in development. If the entire system can be used multiple times, operating costs are significantly reduced, making commercial implementation attractive to companies," says Ilja Müller, Rocket Propulsion Systems Engineer at the Institute of Structures and Design.

In hot firing tests in September 2018, the team led by DLR researcher Markus Kuhn subjected the rocket engine to an initial test run. It successfully completed a total of 18 tests at the high-pressure test bench of Spanish project partner PLD Space, with a firing time of up to 45 seconds, thereby showing very high combustion efficiency of over 90 percent. Liquid oxygen (LOx) and kerosene were used in the tests.