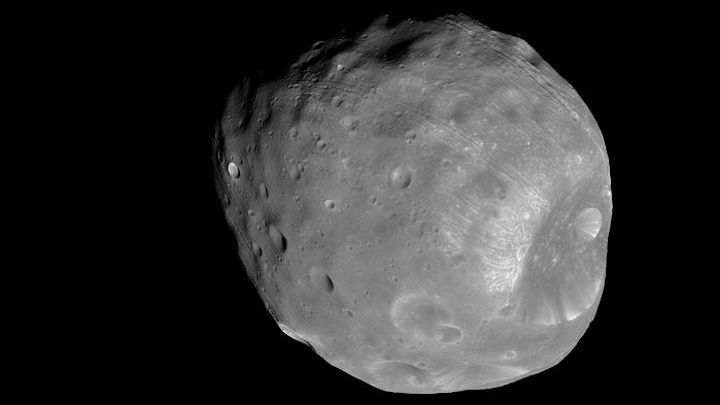 Walk, don’t run, on the martian moon Phobos. A new study finds that traveling faster than about 5 kilometers per hour on some regions of the Red Planet’s largest satellite could shoot you straight off into space.

Phobos (pictured) is an odd duck among our solar system’s moons. It’s tiny (a fraction of a percent the size of our own moon) and is shaped like a potato; that weird shape draws gravity to different places, depending on where you are.

All these features make Phobos a challenge to travel on, researchers report in Advances in Space Research. In some places, moving any faster than 5 kilometers per hour would be enough to free you from the moon’s meager gravitational pull, sending you off into space where you’d likely be captured by Mars’s gravity and end up orbiting the Red Planet. The fastest you could travel anywhere on Phobos would be about 36 kilometers per hour, or a little faster than a golf cart, the team finds.

The findings could pose problems for planned missions to Phobos. Several Russian missionshave already failed to reach the moon, though one attained martian orbit in the late 1980s before contact was lost. A Japanese landing mission slated for the early 2020s will involve observing the moon and extracting samples.

The authors say traveling on the moon will have to happen in slow motion in some places in order to keep contact with the surface. Meanwhile, anything driving on the surface or hovering nearby may need autonomous navigation and control systems to adapt to the wonky spin rate and Phobos's gravity, to avoid being lost in space.