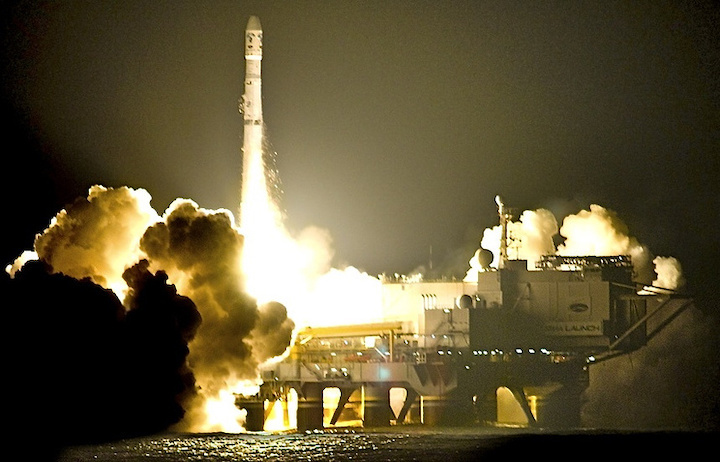 S7 Space plans to modernize the Sea Launch floating spaceport after switching to the launches of its reusable rocket from it, Company CEO Sergei Sopov told TASS on Wednesday.

"The spaceport will be modernized for the new carrier rocket," he said.

Today all the equipment on the command vessel and the launching platform has become obsolete, the chief executive said.

"It was developed 20 years ago. The platform’s remaining service life is another 25 years. Within this period, the launches of Zenit rockets that have been ordered and are in the process of production and also of our new carrier can be carried out," he said.

"The later we make the new carrier, the less time will be left for its operation from the Sea Launch platform," he pointed out.

"But, naturally, the spaceport’s service life, like the service life of any complex technical facility, can be considerably extended in case of its major repairs and modernization," the chief executive said.

S7 Space is considering several ways of recovering the first stage of its future reusable rocket after launch.

"On the list of likely options we have a hypersonic parachute capable of withstanding reentry heat, or special wings. We will make up our mind during the design phase as a result of more accurate calculations and research," he said.

In his opinion at this point it looks like a parachute system will be less costly.

"But if this solution is chosen, landing the re-entry stage safely on a small pre-prepared site will be a great problem due to strong side winds," Sopov said.

Non-reusable rockets have become uncompetitive and a private company has no chance to survive on the space launch market without reusable vehicles today, he said.

"Without it [the reusable carrier], we simply won’t be able to survive on the commercial market. It is not even funny to compete with reusable and cheap offers entering the market with a non-reusable carrier," he said.

"Creating a non-reusable carrier means not simply marking time but is a road backwards," Sopov said.

It is not a matter of the method of recovering the spent rocket stage but largely a matter of "its service life, in the first place, the cycles, the repairability and the labor intensity."

"Today all the rocket’s assemblies and systems [in Russia] are non-reusable, i.e. unfit for their repeat use," Sopov said.

S7 Space is developing its own reusable rocket based on the conceptual design of the Soyuz-5 carrier (being developed by Energia Space Rocket Corporation). The company has dubbed the new rocket "Soyuz-7" and "Soyuz-7SL" (Sea Launch). The S7 Space design office for launch vehicles is headed by Igor Radugin who has recently joined the company after quitting Energia Space Rocket Corporation.

The Sea Launch is a compound comprising the sea and space rocket components, and also the ground infrastructure. The sea component includes the Odyssey floating launch platform and the assembly-command ship used for assembling rockets and exercising control of pre-launch operations. The vessels are based in the state of California, the USA.

The compound’s space rocket component comprises the Russian-Ukrainian Zenit-3SL carrier rocket and the Russian DM booster. The rocket’s two stages are assembled at the Ukrainian Yuzhmash enterprise, although 80% of its components are made in Russia. After their manufacture, the rocket stages are transported by sea to the United States where the rocket is finally assembled.

The launches are carried out from the equatorial Pacific near Christmas Island.