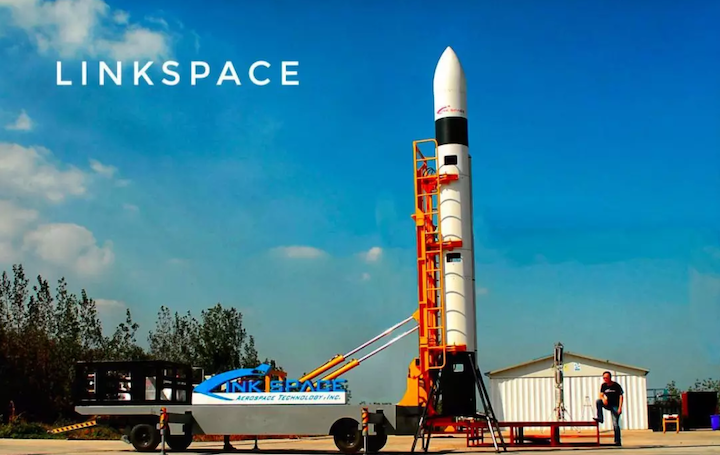 The RLV-T5 technology demonstrator will attempt vertical takeoff, vertical landing (VTVL) and is designed to verify key technologies including variable thrust, multiple engine restarts and roll control with its flight and recovery tests, according to a press release (Chinese).

This follows development of smaller scale rockets such as the RLV-T3 for VTVL and hover tests performed early in 2018, similar to demonstrations by Masten Space Systems.

Shock diamonds or Mach rings seen in the exhaust plume of the RLV-T5 engines tested by Linkspace. Linkspace

Linkspace says it will create 'new milestones' for retrievable rockets in China in the coming months, and in 2019 will test the next iteration, the suborbital RLV-T6.

American firm SpaceX took a similar route, using the Grasshopper as a technology demonstrator on the way to developing its Falcon 9 rocket, which has revolutionised the launch market. The latest iteration is capable of delivering 5,500 kg to geostationary transfer orbit with a recoverable first stage while greatly reducing the cost of access to space.

The goal for Linkspace after the RLV-T6 is debuting the NewLine-1 orbital rocket ( 新干线一号/Xin Gan Xian 1) in 2020, with a recoverable and reusable first stage.

The NewLine-1 two-stage liquid propellant launcher will be capable of carrying 200 kg of micro and nanosats to Sun-synchronous orbit up to an altitude of 500 kilometres. No clear specifications for potential NewLine-2 or later launch vehicles have been presented.

Render of a NewLine-1 rocket under development by Linkspace. Linkspace

The company was founded in January 2014—ahead of a Chinese government policy change later that year that opened up the space sector—making it the first private launch firm in China.

The late 2014 policy shift opened the door to commercial small satellite and launch vehicle companies, with access to technologies being facilitated by the national military-civilian integration strategy.

However in going straight for VTVL capabilities, which have so far been developed in the US but not China, Linkspace has had to progress from a situation of technological immaturity.

Meanwhile fellow startups iSpace and OneSpace, with a level of access to existing solid-propellant technologies developed by space and defence contractors, have this year launched two suborbital rockets each since April, with the last being filmed from orbit by a commercial Jilin-1 video satellite.

Landspace held their first launch on Saturday, attempting to go straight into orbit. An issue with the third stage however saw the spacecraft with its Weila-1 small satellite payload fail to reach orbit and fall into the Indian Ocean. However OneSpace could attempt to go orbital as soon as the end of the year.

If NewLine-1 is successfully developed and proven to be reliable, economical and even rapidly reusable, such capabilities could help reduce launch costs but also limit the dangers of launching inland, which frequently result in rocket debris landing in inhabited areas.

CASC, the main contractor for the space programme, is also working on VTVL and reusability, with subsidiaries CALT and SAST working on recoverable Long March 8 and upgraded Long March 6 launch vehicles, as well as putting parachutes on spent boosters and parafoils on fairings.

A vertical takeoff, vertical landing test by Linkspace of China in January 2018. Linkspace 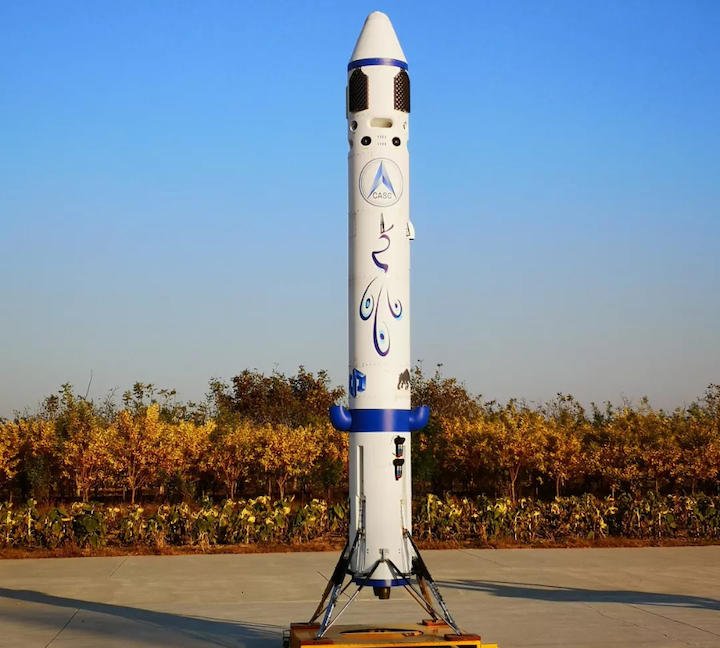 China has continued recent moves towards recovering and reusing its space launch vehicles with a small scale verification test of vertical landing and navigation and guidance control technology.

The test (Chinese) was carried out on October 29 by the Beijing Aerospace Automatic Control Institute, also referred to as the 12th research institute under the China Academy of Launch Vehicle Technology (CALT).

CALT is a major launch vehicle designer and maker, as well as one of the academies, under the China Aerospace Science and Technology Group (CASC), the main contractor for the Chinese space programme.

From the footage and online commentary it appears the test vehicle uses jet engines rather than rocket propulsion for landing, with the focus on testing the navigation and guidance control technology for vertical takeoff, vertical landing (VTVL) launch vehicles currently under development.

The institute says it will follow up the tests in order to assist the development of a reusable space transportation system.

Footage of a test for vertical landing and guidance control technology carried out by an institute under the main Chinese space contractor CASC. Beijing Aerospace Automatic Control Institute

Following the successful development of such capabilities in the Falcon 9 and Falcon Heavy rockets, China and others have been looking into the technological feasibility and economic benefits of landing, recovering and reusing rocket stages.

The Shanghai Academy of Spaceflight Technology (SAST), a subsidiary of CASC and maker of launch vehicles and spacecraft, is developing a reusable variant of the expendable light-lift Long March 6 with the aim of reducing launch costs by around 30 percent.

A model of a reusable Long March 6X at the 20th China International Industrial Fair in Shanghai, September 19, 2018. SAST

Practical steps towards recoverability, particularly related to the issue of safety following launch from China's inland launch sites, have been taken in the last couple of months.

The boosters from a Long March 3B launch on October 15 carried data logging and active tracking equipment for tests to determine the altitude and timing for future parachute landings.

In September CASC also tested the use of a parafoil on the payload fairing with the aim of improving accuracy of its return to Earth so as to prevent debris landing on people and property, as well as potentially eventual reusability.

A China National Space Administration (CNSA) official said in September that development of reusable rocket stages and boosters is mainly related to 'safety', rather than stating the economics of launch as a factor.