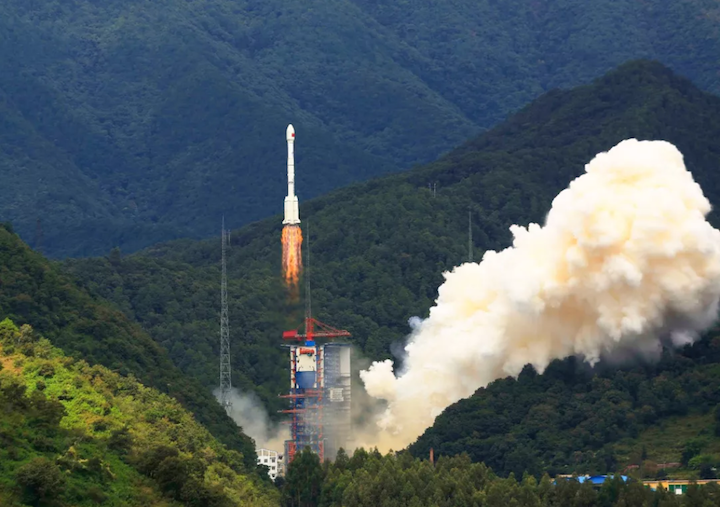 China successfully launched a pair of Beidou navigation and positioning satellites into medium Earth orbits on Monday with the country's 28th orbital launch of 2018.

A Long March 3B rocket with a Yuanzheng-1 upper stage lifted off from the Xichang Satellite Launch Centre in southwest China at 04:23 universal time (12:23 local, 00:23 Eastern).

The China Aerospace Science and Technology Corporation (CASC) confirmed the mission to be a success four hours later, following direct insertion of the Beidou-3 satellites into their intended medium Earth orbits (MEO).

The China Academy of Launch Vehicle Technology (CALT) which developed the Long March 3B rocket reported that data logging and active tracking equipment was placed aboard for tests to determine to altitude and timing for future parachute landings for boosters.

The trial phase of parachute booster landings is expected in 2019. Expended rocket boosters frequently land in or near populated areas downrange of Xichang.

The satellites are the 39th and 40th launched as part of China's Beidou system, following the launch of the first in 2000.

The Beidou navigation system, which takes its name from the Chinese asterism equivalent to the Plough or Big Dipper, is China's answer to the US Global Positioning System (GPS), Russia's GLONASS and Europe's Galileo GNSS constellations.

The completed system of 35 operational Beidou satellites will have 27 satellites in MEO at around 22,000 km altitude, five in geostationary orbit and three more in inclined geosynchronous orbits at 35,786 km, providing global GNSS coverage with a positioning accuracy of 2.5 metres.

Systems like GPS and Beidou provide civilian applications such as navigation for shipping and road traffic, mapping and surveying, but also assist military forces from space, facilitating targeting, positioning and locating, and the synchronising of operations. The development of Beidou will end previous Chinese military reliance on GPS.

Beidou, also referred to as BDS, is considered a project of national significance and part of the country's national security, economic and social development.

A range of Beidou applications according to the China Navigation Satellite Office. CNSO

China has earlier completed the BDS-1 system to provide positioning, navigation and timing services Chinawide, followed by BDS-2 which provides services across the Asia-Pacific region. The ongoing construction of BDS-3, to establish global coverage, could be completed in 2020.

The Beidou-3 satellites launched into MEO are based on a satellite bus that features a phased array antenna for navigation signals and a laser retroreflector with a launch mass 1,014 kg, according to NasaSpaceFlight. However, the previously launched pair included, for the the first time, 'search and rescue' payloads, likely similar to the service planned by Europe's Galileo system.

A Beidou-3 positioning and navigation satellite, to be launched into medium Earth orbit. CNS

With 28 launches so far in 2018, China has already passed its previous record for launches in a calendar year of 22, set in 2016. The main contractor for China's space programme stated at the start of 2018 it intends to launch up to 35 times this year.

Upcoming launches will include the Haiyang-2B marine observation and China-France Oceanography SATellite (CFOSAT), with the latter set for October 29. The Gaofen-7 Earth observation satellite, the SaudiSat-5B technology test and launches of a host of smaller satellites are also expected.

Commercial actors including Expace and Landspace will add to the numbers with launches of Kuaizhou and Zhuque rockets.

Landspace's Zhuque-1 (Vermillion Bird-1), a three-stage solid-fuelled rocket, will attempt to be the first privately-developed orbital launch vehicle at the end of October.

China is still planning further Beidou satellite launches this year using the Long March 3B rocket, another pair to MEO and a single satellite to geostationary orbit. The same launch vehicle will be used to launch the ground-breaking Chang'e-4 lunar far side landing and roving mission in December. An issue with any of these launches will likely delay the launch of Chang'e-4.

The white box indicates the Chang'e-4 landing area with the Von Kármán crater, according to a paper from Huang Jun et al, 2018. Huang et al, 2018.