Astronomers are poring over the candidates from the Transiting Exoplanet Survey Satellite to confirm how many are bona fide planets. 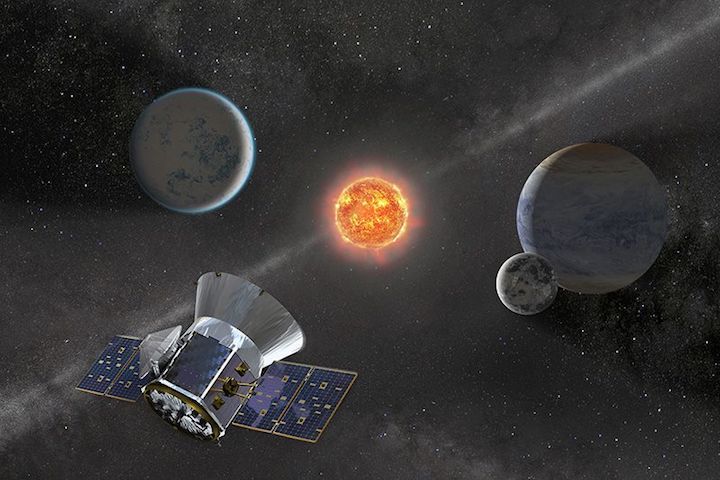 An artist's illustration of NASA's latest exoplanet-hunting satellite searching nearby stars for other worlds.Credit: NASA/Goddard

Astronomers are studying the first batch of possible planets spotted by NASA’s Transiting Exoplanet Survey Satellite (TESS), which hunts for worlds around nearby bright stars. The ‘TESS Objects of Interest’, released to other scientists for follow-up observations on 5 September, include dozens of planetary candidates.

TESS launched in April and began its science operations, which are expected to last for two years, in July. The satellite is currently searching for planets in the southern sky; the latest results come from the first slice of that survey. The spacecraft observed 15,900 stars every two minutes during this initial run, in search of the slight dimming caused when planets orbiting those stars cross their face, blocking a small percentage of the starlight.

TESS scientists released the list so that other astronomers could make an initial determination as to whether these candidates are planets. There are 73 objects in this first batch, including some planets previously known from ground-based searches, says George Ricker, the mission's principal investigator at the Massachusetts Institute of Technology in Cambridge. Perhaps 5 to 20% of the objects on the list will turn out to be false alarms, he says. Others, if confirmed, will join the ranks of newly discovered exoplanets.

Researchers expect TESS to find as many as 10,000 large planets. But its main goal is to discover and measure the masses of at least 50 small worlds no more than four times the size of Earth.

“The exciting thing about TESS is that it’s an opportunity to meet the neighbours,” says Zachory Berta-Thompson, an astronomer at the University of Colorado Boulder. Some of the new worlds “may turn out to be the planets that we’ll study for decades or centuries to come”, he says.

TESS’s predecessor, the Kepler spacecraft, has discovered more than 5,300 planets or planetary candidates since its 2009 launch. Having greatly exceeded its initial mission of four years, it is now running low on fuel and starting to have problems pointing at the sky.