Chinese commercial space launch company OneSpace will launch its second rocket in September, which will mark the first private Chinese launch from a national launch centre.

The rocket will be an OS-X1 series suborbital rocket, named Chongqing Liangjiang Star, which has a height of 10.2 m, a diameter of 0.85 m and mass at liftoff of 8.1 metric tonnes. No information on the payload was made available.

The launch will take place at the Jiuquan Satellite Launch Centre in a desert region of Northwest China, which became China's first launch centre when opened in 1958.

The OS-X1 rocket test team, which according to a press release consists of about 20 people with nearly half of which were born in the 1990s, is currently at Jiuquan for assembly of the rocket.

The first OneSpace launch—from a test base in northwest China and claimed to be the first launch of a privately designed Chinese rocket—took place on May 17 this year and saw the OS-X1/Chongqing Liangjiang Star fly for 265 seconds, reaching an altitude of around 40 kilometres and travelling some 273 km.

Another Chinese startup, iSpace, had a month earlier launched a Hyperbola-1S test rocket, surpassing the 100 km altitude Karman line which is generally accepted as the boundary between Earth's atmosphere and outer space.

OneSpace Technology was established in 2015 with support of the State Administration for Science, Technology and Industry for National Defence (SASTIND), which oversees the space sector in China, with a military-civilian integration initiative providing access to necessary technology such as solid rocket motors.

The startup is now carrying out suborbital flights for a research contract with an aerospace company for aerodynamic and other high-altitude tests. The launches will also provide experience ahead of its debut orbital launch which is currently expected before the end of 2018.

OneSpace is aiming to achieve an annual production capacity of more than 30 OS-M series rockets and 20 or more OS-X series rockets by 2020, according to earlier statements from CEO Shu Chang.

Expace, a nominally private space launch company which is in reality a subsidiary of Chinese state-owned missile maker and defence contractor CASIC, will also carry out its next launch in September.

The launch will involve a Kuaizhou-1A, a 20-meter-tall, 1.4-meter-diameter solid-fuelled rocket, lofting the Centispace-1-S1 satellite to a 700 km Sun-synchronous orbit (SSO).

Beijing-based Landspace meanwhile is preparing for its first launch, of an orbital Zhuque-1 solid-fuelled rocket, to take place in the final quarter of the year.

The mission aims to be the first orbital launch by a Chinese private space company and will carry the 'Future' satellite into an SSO for China Central Television (CCTV).

The Zhuque-1, which refers to the mythical Vermillion bird, last week went through assembly and factory tests. The 19-metre-tall rocket has a diameter of 1.35-metres, a takeoff weight of 27 metric tonnes, producing 45 tonnes of thrust.

A private Chinese company sent a suborbital rocket into space at 1:00 p.m. Wednesday from the Jiuquan Satellite Launch Center in northwest China.

The SQX-1Z was developed by iSpace, a Beijing-based private rocket developer, founded in 2016 with a research center in Xi'an, Shaanxi Province.

The rocket carried three CubeSats, miniaturized satellites, for two Chinese commercial companies. After entering its preset orbit, the rocket will release two satellites for testing, and the third satellite will be parachuted to Earth, according to a statement by the company.

After the launch, the SQX-1Z rocket will provide minisatellite and constellation launch services for clients, said Yao Bowen, who works for the company's public relations division.

Reports said the SQX-1Z rocket took off from the Jiuquan Satellite Launch Center in northwestern China and entered space at a suborbital level. Two of the satellites will be released into space for testing while the third will re-enter the atmosphere and parachute down to Earth.

It was believed to be the first time a private Chinese company had carried satellites into space. Founded in 2016, iSpace is develops "high-quality, low-cost, fast-responding" commercial launchers to serve micro-satellite manufacturers, operators, research institutes and universities at home and abroad, according to a company statement.

China's space program has traditionally been run by the military, but a number of commercial satellite launchers have also sprung up in recent years, modeled on private U.S. companies such as SpaceX and Blue Origin.

In May, Beijing-based OneSpace Technologies became the first private Chinese spaceflight company to send a rocket into space, launching its relatively modest 9-meter (30-foot) OS-X for a test flight that ended with it falling back to Earth.
Quelle: THE TRIBUNE
---
Update: 6.09.2018
. 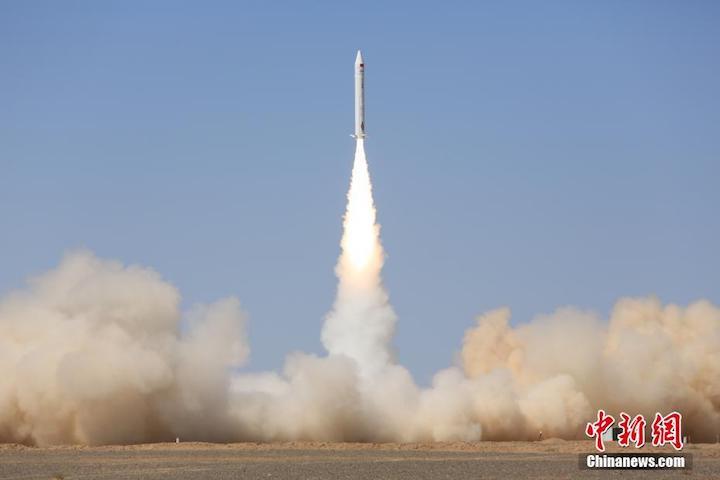 Commercial startup iSpace launched a solid-fuelled rocket carrying three small payloads on Wednesday, kicking off a period which will see launches from a number of companies in the emerging Chinese private space sector.

Liftoff of the Hyperbola-1Z single-stage solid rocket took place at the Jiuquan Satellite Launch Centre in the Gobi Desert in northwest China at 13:00 local time (05:00 UTC).

The Hyperbola-1Z (SQX-1Z) is 9 metres tall with a diameter of 1 metre. A post-launch iSpace press release claims a flight can reach an altitude of 175 kilometres and a velocity of 1.6 km per second in a flight lasting more than 450 seconds. A velocity of close to 8 km/s is required to achieve orbit.

Aboard were three small 'satellites', despite the suborbital trajectory. EREBUS-1, developed by Beijing ZeroG Technology Co. Ltd., parachuted back to Earth. 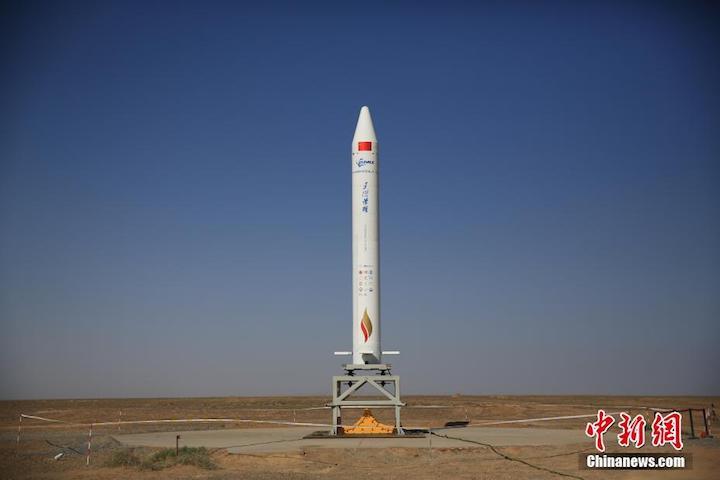 Hyperbola-1Z (SQX-1Z) sounding rocket ahead of liftoff from the Jiuquan Satellite Launch Centre at 05:00 UTC on September 5, 2018. CNS

The company had in April launched a Hyperbola-1S rocket from a base on Hainan Island marking an apparent first for a Chinese commercial launch company. However, doubts about the achievement have arisen, with an alleged lack of payload or flight guidance, as well as the origin and development of the rocket.

In July iSpace completed a series A round led by Matrix Partners China, bringing its total financing to 600 million yuan (US$90 million) in 2018. 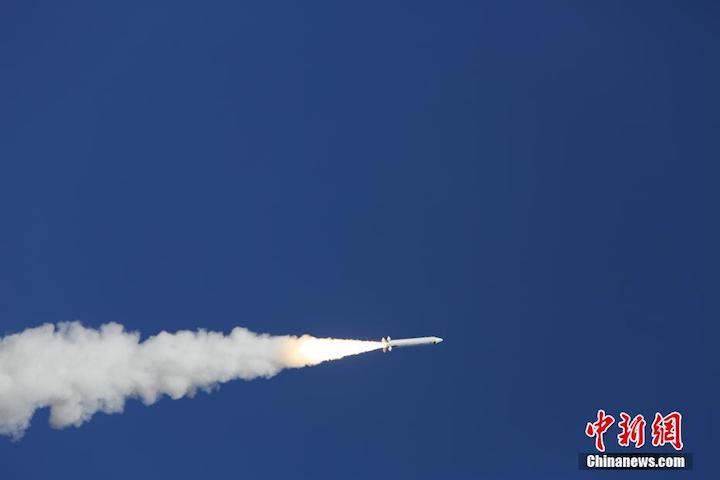 Next commercial launch within days

OneSpace, another Chinese launch startup, is expected to launch its second rocket, the Chongqing Liangjiang Star belonging to the company's OS-X suborbital rocket series on September 7.

The rocket has a height of 10.2 m, a diameter of 0.85 m and mass at liftoff of 8.1 metric tonnes and is expected to carry an experimental payload for commercial customers.

The startup claims that its debut launch in May was the first of a privately-developed rocket, reaching an altitude of around 40 kilometres during its 265-second flight. 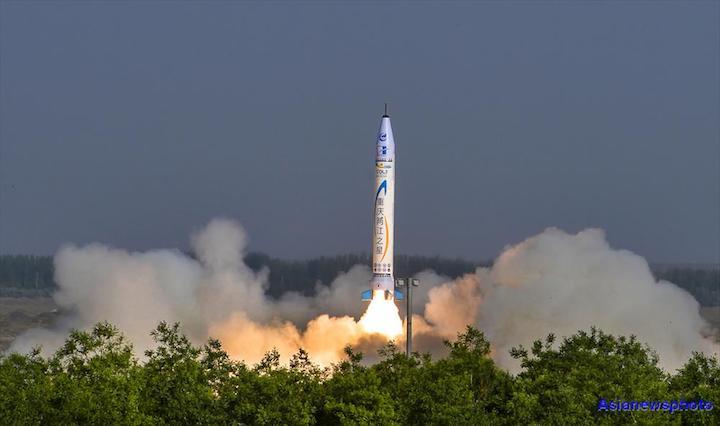 Both iSpace, in the first half of 2019, and OneSpace, before the end of 2018, are aiming to launch their first orbital launch vehicles, named Hyperbola-1 and OS-M1 respectively.

Hyperbola-1 will have three solid stages and one liquid stage, with a diameter of 1.4m, a total length of 20m, a take-off mass of 31 metric tonnes. It will be capable of lifting 300 kg to a low-Earth orbit (LEO), and 150 kg to a 700km altitude Sun-synchronous orbit (SSO).

OneSpace on August 24 tested third stage engines and second and third stage separation as part of getting the OS-M1 ready for the launch pad.

The Chinese government took the decision in late 2014 to open the space sector to private capital, paving the way for establishment of and investment in companies seeking to develop launch vehicles and other areas including remote sensing satellites.

Following this, companies including Linkspace, which is aiming to debut its vertical takeoff, vertical landing launch vehicle in 2020, Expace, a subsidary of state-owned missile-maker CASIC, and Landspace, which will soon attempt the first private orbital launch before turning to a liquid propellant methane-liquid oxygen Zhuque-2 rocket series.

The Landspace Zhuque-1 three-stage rocket is expected to launch in the final quarter of 2018, with liftoff now looking likely to take in October, carrying the Future (Weilai-1/未来一号) for China Central Television (CCTV).

Expace will also this month employ its 20-metre-tall, 1.4-meter-diameter Kuaizhou-1A solid-fuelled rocket to launch the Centispace-1-S1 satellite, marking the second launch for the missile-derived launch vehicle, which debuted in January 2017.