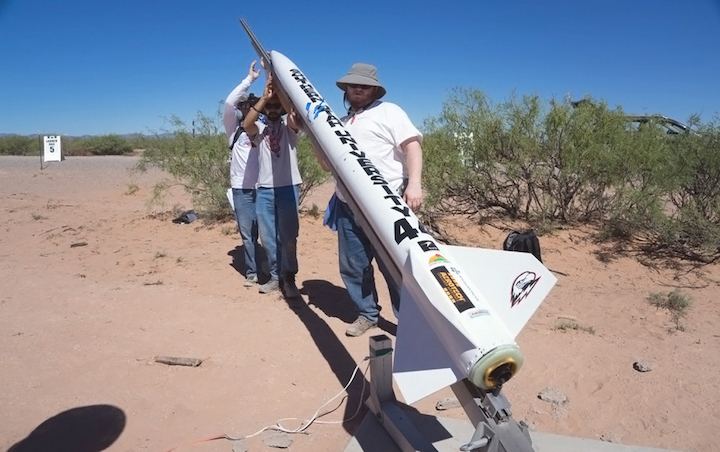 “The RocketBirds placed well, particularly considering the size of our program and budget as compared to some of our competitors,” said Dr. Scott Munro, associate professor of engineering. “For the past three years we have put together rockets that are competing with the best schools in the country on a low budget and with a small team, comparatively.”

Seven SUU students traveled with Munro to a desert area just outside the town of Truth or Consequences, New Mexico. The team was also accompanied by SUU President Scott L Wyatt, who claimed the special honor of pushing the button to ignite the rocket motor.

“The SUU RocketBirds’ performance at the 2018 Spaceport America Cup is an exceptional showing of our small program,” said Wyatt. “It was an honor to push the launch button, and I can’t wait to participate again next year.”

SUU’s rocket was 75 pounds and 11.5 feet tall. The structure was constructed entirely from fiberglass, and computer simulations were run to verify the rocket’s stability and performance during flight. It flew to an altitude of about 7,600 feet above ground level and flew as anticipated.

The multi-discipline project included aerodynamics, structures, propulsion, and electrical and testing operations. SUU students were split into several teams to construct their rocket, including propulsion, airframe, avionics, and payload. The rocket design revolved around the payload, which was a defined size. From there, the team determined how big the rocket needed to be.

“These types of projects require long-term teamwork, time management and budgeting,” said Munro. “Companies that build or work with rockets see this competition as a great place to recruit new talent.”

The first day of the competition consisted of a session where teams interacted with each other, judges, and members of the public. The remaining days were spent at the launch site, where the RocketBirds were the ninth team to fly.

With more than 99 teams from colleges and universities representing more than 12 countries, 2018 was the competition’s largest year to date. Students launched solid, liquid, and hybrid rockets to target altitudes of 10,000 and 30,000 feet.

The Rocket Club is funded by a grant from the Utah Space Grant Consortium, department funding and funds from the Engineering Initiative. The team also received ammonium perchlorate from American Pacific (Wecco), the primary ingredient in the rocket fuel.

The Spaceport America Cup is designed around the Intercollegiate Rocket Engineering Competition for student rocketry teams from across the world. The IREC has held annual competitions since 2006. Previously held in Green River, Utah, the competition achieved international status in 2011 when schools from Canada and Brazil joined and has doubled in size every year since 2013.