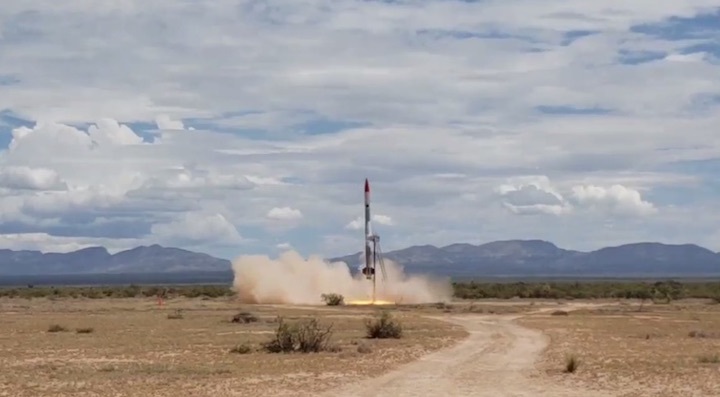 The company’s first Suborbital Autonomous Rocket with GuidancE, or SARGE, rocket lifted off from Spaceport America in New Mexico at approximately 2:15 p.m. Eastern. After reaching an unspecified peak altitude, the rocket descended under parachute, landing about 15 minutes later a short distance from the pad. The rocket’s nose cone, descending under a ballute, landed several minutes earlier.

The company didn’t immediately disclose technical details about the flight, such as the peak altitude, but in a live webcast of the launch appeared to be satisfied with the vehicle’s performance, despite the vehicle appearing to veer from its vertical trajectory briefly after liftoff.

“This was a very successful test for us,” said John Quinn, chief operating officer of Exos, on the webcast. “We’re very excited that we had all of our recovery systems operational.”

The launch was carried out under a commercial launch license issued by the Federal Aviation Administration in February. At the time, the company was planning a launch in early April, but postponed that launch because of technical problems with the vehicle, notably issues with its inertial measurement units, that pushed back the launch by several months.

The company, featuring a number of veterans of now-defunct launch company Armadillo Aerospace, has been working for the last few years on SARGE, a vehicle designed to carry payloads of up to 50 kilograms on suborbital flights. Prior to this launch, Quinn said the company hoped this “pathfinder” launch would help it secure new customers, including NASA’s Flight Opportunities program for parabolic and suborbital research payloads.