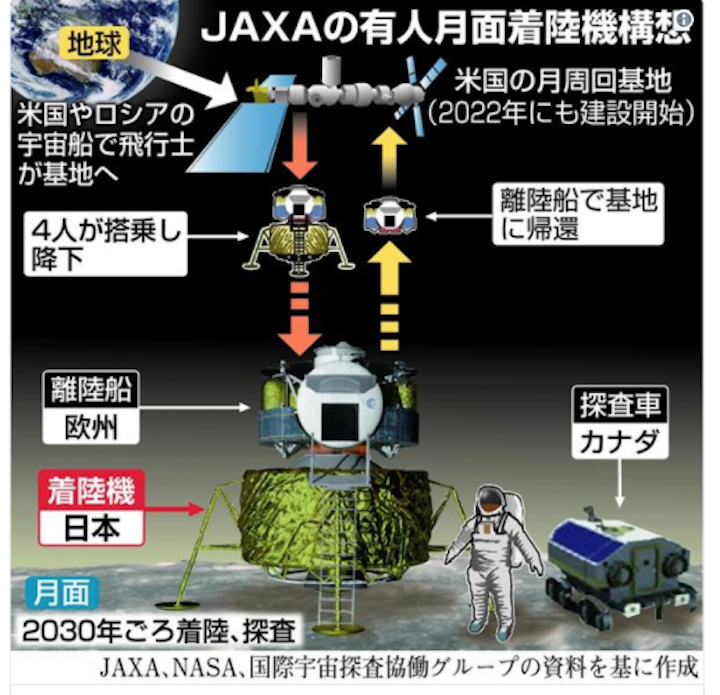 JAXA (Japan Aerospace Exploration Agency) has announced that it is planning to build the first manned Japanese lunar aircraft in history. JAXA will collaborate with the plans of American and European space agencies, aiming to start production in 2020. Ideally the finished aircraft will head for the moon 10 years later.

According to the proposed plans, the "lander" (device responsible for anchoring to the moon’s surface) will be developed by Japan and will look a bit like a table with four legs. It will be jettisoned from a space station orbiting the moon (that one’s NASA’s responsibility, a follow-up to the International Space Station forecast to launch in 2022).

The Japanese lander will descend on the moon with a European spacecraft perched snugly on top of it. The spacecraft can house four astronauts, and once the entire construction lands on the surface the astronauts can alight onto the moon itself. The lander will use reverse-thrust engines to allow a cushiony landing, and its plateau will also serve as a launch pad for the astronauts’ space craft so that they can travel between the surface of the moon and the orbiting space station.

Also included in the plans is an exploration vehicle, due to be developed by the Canadian space team. The lunar team will use this space-age terrain car to take a two-day research expedition around the lunar landscape, and then return to the space station – leaving the lander where it is.

These excursions are expected to last about four or five days from when the astronauts depart from the base until they return, and JAXA hopes to carry out five of the expeditions per year. This will be the first manned moon trip proposed by Japan, and the first moon trip by anyone at all in 60 years. A real moment for the history books.

There are a few doubtful voices throughout the internet – but space travel is space travel, and it’s very easy to get swept up in the excitement that Japan is considering taking a rocket ride into the stratosphere at all.

“The rest of Japan is going to the pits, but at least JAXA is working hard!”

“Whether it’s possible or not, it’s a step in the right direction for Japan to think seriously about space travel.”

“Enough with the moon already! Let’s go to an asteroid or something instead. I’m so tired of the moon, we go there all the time.”

It’s going to set JAXA back well over 10 trillion yen to set up this lunar procedure, so maybe it’s time they arranged a donation drive, or at least something to boost awareness.