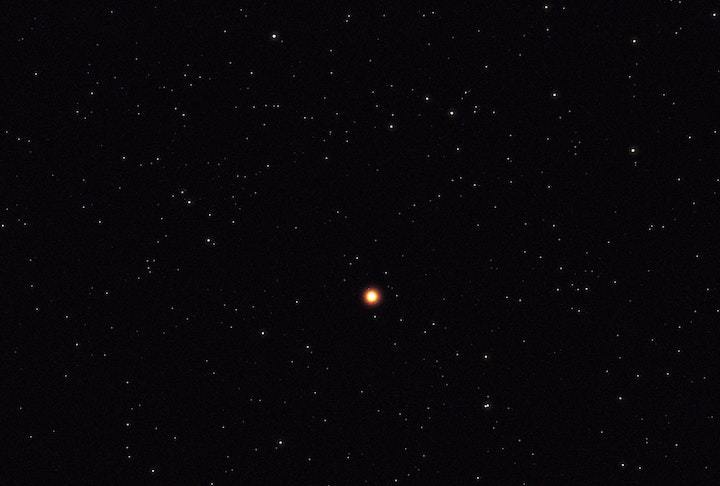 Betelgeuse, bright in the night sky.

For several years, astronomers and anthropologists have analysed records collected by ethnographers more than a century ago regarding some of the oral lore of the Aboriginal people of South Australia.

The results suggest that the Aboriginal knew that the star Betelgeuse varies in brightness along with two other red-giants, Aldebaran and Antares, located in the southern sky.

Betelgeuse is easy to spot in the southern hemisphere. It is located in the constellation of Orion – known colloquially as “the Saucepan”. Nearby is the red star Aldebaran, in the Hyades star cluster. Lastly, the star Antares is found at the centre of the constellation Scorpio, taking the prestigious position as the red heart of the scorpion.

A lesser known trait these stars all share is that they mysteriously and dramatically vary in brightness, over cycles that last between 400 days and five years.

In the Western tradition, it has been widely accepted by the broader scientific community that the first description of Betelgeuse’s long dimming and brightening cycle was made in 1836, by astronomer Sir John Herschel.

However, several recent papers, the earliest from 2008, suggest that Aboriginal Australians had included the phenomenon in their oral lore millennia earlier. This has evoked scepticism from some parts of the scientific community, on the grounds that the ability to detect such uncommon changes in stars and pass the knowledge on for thousands of years seems an impossible feat.

Now, a new paper published in the Journal or Astronomical History and Heritage, adds weight to conjecture. Author Bradley Schaefer from Louisiana State University in the US argues that not only was it completely possible but also highly probable that the Aboriginals detected variable stars.

Century-old ethnographic records, he concludes, provide “real proof” that “Aboriginal lore gives an unambiguous statement that these stars do indeed vary in brightness”.

The minimum variation in brightness that a non-trained person can detect is around 0.3 magnitude – an increase or decrease of approximately one third. Betelgeuse more than triples in its brightness, while Aldebaran’s light varies by 60% and Antares by 250%. All these changes are well above the minimum for detection.

Nearby stars can be used as standards to compare brightness with variable ones. This is a method still used today by amateur astronomers.

The outback sky at night, undiminished by artificial lights, must have been an impressive and frequent backdrop for the Aboriginal people to study. The brightest and most colourful stars are the ones most frequently incorporated into lore and culture. The indigenous people also relied on their close relationship with the world around them. Any change to the sky would have been noticed, even one over the course of years.

These three stars, along with many other astronomical objects and events, have great cultural significance to many groups of indigenous Australians throughout South Australia. For thousands of years before the arrival of Europeans, the stars were closely tied into two main stories within the oral tradition.

One on these is known as the “Seven Sisters” story. The constellation Orion is depicted as a hunter, with Betelgeuse in his right hand, who, as the Earth turns, appears to chase the sisters, formed from the Pleiades star cluster, across the sky. The variable stars represent fire-magic ,and the variability depicts the strengthening and weakening of this magic from the characters in the story.

The Aboriginal people also have a well-known ability to pass knowledge down generations with little change, through oral lore.

Many of these stories are derived from real-life events, allowing their origin to be dated.

One example of this is the formation of the Henbury craters, in Australia’s Northern Territory. These were formed by a meteorite impact around four thousand years ago. The indigenous stry that describes the event thus dates from the same period.

In his paper, Schaefer cautions that some claims made for the astronomical knowledge of Australian Aboriginal people (and by extension those made for other indigenous cultures) “have no compelling evidence, are contrary to cultural plausibility, and are often technically wrong”.

Where such claims can be verified and supported by evidence, however, ancient oral traditions provide valuable insight into astronomical events that were not otherwise recorded.