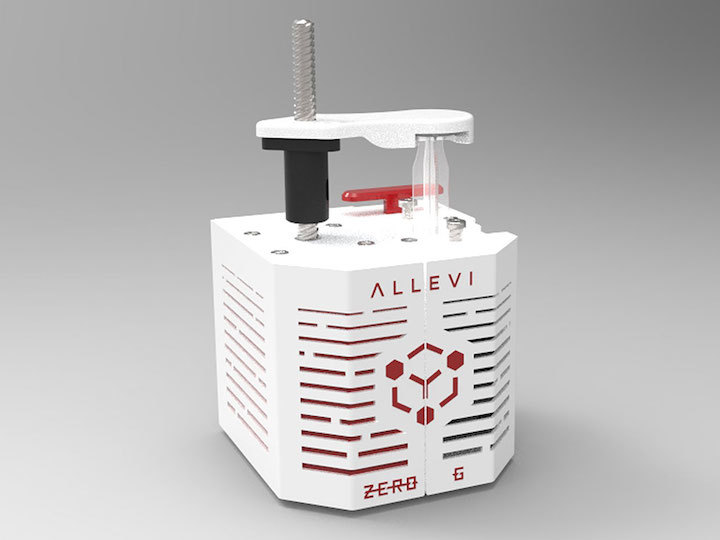 When our reality catches up with sci-fi, there will be lots of reasons to have bioprinters in space.

For example, an astronaut on the long-haul voyage to Mars might get a terrible burn while futzing around with chemicals, and would be grateful for the ability to print out a new patch of skin. Or, looking even further into the future, a Martian colonist might suffer from liver failure but be saved by doctors who could print out a replacement organ.

Those scenarios are far off both in terms of humanity’s spaceflight capabilities and the state of 3D bioprinting—a rapidly advancing technique in which specialized 3D printers squeeze out biomaterials and cells to build up pieces of tissue, layer by layer.

But a new partnership between the bioprinter company Allevi and Made in Space, a company with two 3D printers aboard the International Space Station (ISS), represents the first step toward those scenes of sci-fi medicine.

Allevi has designed the ZeroG bio extruder, which is capable of printing biomaterials in microgravity, and the two companies have worked together to ensure that it slots easily into a Made in Space printer. “We want it to be astronaut plug-and-play,” says Ricky Solorzano, CEO of Allevi (the company formerly known as BioBots).

The ZeroG is just a proof of concept, but both companies seem confident that they can get the extruder up to the ISS in the near future. “We have a lot of experience with biomaterials, and they know how to get things to space,” says Solorzano. 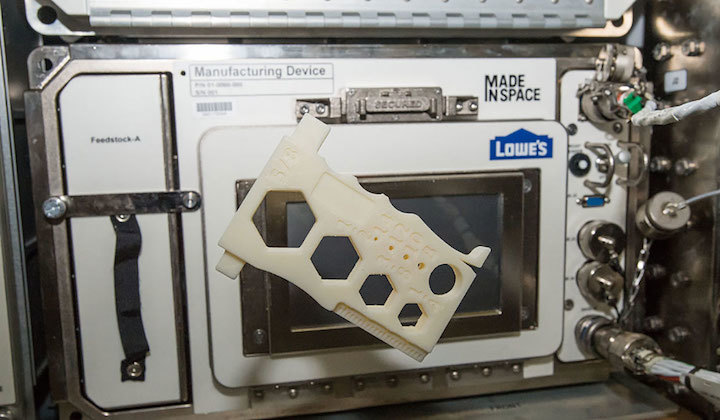 Made in Space put the first ever 3D space-printer on the ISS in 2014, and added a second one in 2016. Doing 3D printing in space requires careful control of the extrusion process, because you don’t want droplets of material floating away. It also requires control of the machine’s operating temperatures; the microgravity environment lacks the convection we’re accustomed to here on Earth, so “it’s hard to keep the hot parts hot and the cold parts cold,” explains Andrew Rush, president and CEO of Made in Space.

To print out biomaterials like hydrogels, a type of biocompatible material that’s often used as a “scaffold” for cells, Allevi’s ZeroG extruder has a piston (on the left) that drives a syringe (on the right). The key is to manage the extrusion of materials that will stick together instantly, with each layer bonding to the previous layer, so the printer can construct objects with the desired geometry.

Here on Earth, bioprinting is coming along nicely. Various researchers have successfully printed scraps of human skin, though their technologies haven’t yet made it to the clinic. But printing an organ is a much harder task, as organs are made up of a variety of cell types and are interlaced with blood vessels and nerves. Companies like Organovo are working hard to meet this challenge—maybe by the time colonists take up residence on Mars, the technology will be ready.

Once the ZeroG extruder is integrated into the printer aboard the ISS, it will have several more immediate applications. Solorzano says that Allevi has distributed more than 200 printers to labs around the world, and he hopes those users will propose science experiments: They could run simultaneous experiments on ISS and on Earth and compare the results, he says.

There are plenty of interesting scientific questions about how biological materials behave in space. For example, Solorzano says researchers might investigate how bones form and respond to the lack of gravity, which is an important issue for astronauts who spend extended time in space.

“We want it to be astronaut plug-and-play.” —Ricky Solorzano, Allevi

Another application builds on Made in Space’s push for “space-enabled manufacturing,” the idea that microgravity will allow for the production of special kinds of materials and products that couldn’t be made on Earth and that have real value here. Already, Made in Space is experimenting with manufacturing optical fibers on the ISS, and the pharmaceutical company Merck is growing crystals that may be useful for drug delivery.

Will Allevi discover certain kinds of space-grown biological tissue that will be useful to planet-bound people? “That’s further down the line—but we won’t know without doing the basic biology experiments,” Solorzano says.

There are two routes for getting the gear up to the ISS: Allevi can either convince NASA to bring the extruder up for its own experiments, or it can be sent up at the behest of researchers who get time at the national lab aboard the ISS.

Either way, the ZeroG extruder will have to pass NASA’s safety and verification checks. “Everything that goes up goes through this process,” says Rush, of Made in Space. The space agency needs to evaluate all the materials and systems to ensure they won’t pose a threat to astronaut health or the ISS’s operations. “NASA needs to know that if something happens to [the device], it will fail in a safe way,” Rush says.

The biggest hurdle to bioprinting in space may be the materials. While it should be relatively easy for Allevi to get clearance to send biomaterials like hydrogels up to the ISS, it will be tougher to get approval to send up the human cells that fill in those hydrogel scaffolds. “We need to figure out what the constraints are in terms of handling cells on the ISS,” Solorzano says.

And there’s one other step before the gear gets flight approval, Rush says: The ZeroG extruder will have to spend some time on one of NASA’s shake tables. “They have to ensure that it will survive the rocket ride to space,” he says.