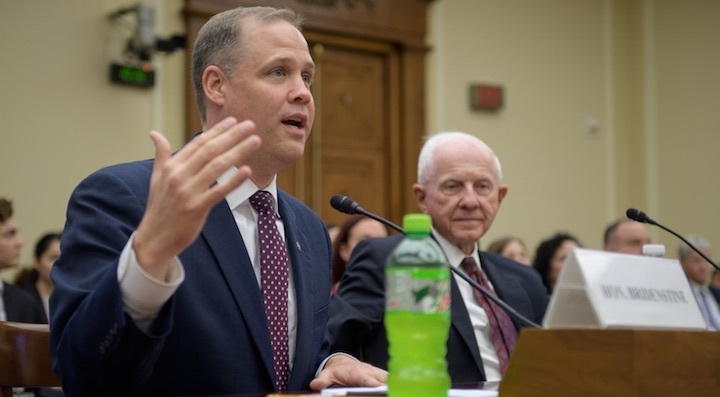 WASHINGTON — NASA Administrator Jim Bridenstine said July 25 that, in order to address the delays and cost overruns with the James Webb Space Telescope, the agency may seek to slow down development of another flagship astrophysics mission.

Testifying before the House Science Committee in the first half of a two-part hearing on JWST, Bridenstine suggested that slowing down work on the Wide-Field Infrared Survey Telescope (WFIRST) until after JWST is launched could be a way to deal with JWST’s increased cost while maintaining a “balanced portfolio” of large and small astrophysics programs.

“It is true we can do some development now. I’m not saying that we need to shut down WFIRST, and we shouldn’t do it,” he added. “What I’m saying is there’s opportunity here.”

Current plans for WFIRST call for a launch in 2025, assuming full funding. That funding is uncertain at the moment, though, since the administration proposed cancelling WFIRST in its 2019 budget request. House and Senate versions of appropriations bills would keep the mission going, but the House bill offers $150 million versus $352 million in the Senate bill. The latter amount, NASA says, is what’s needed to keep the mission on schedule.

NASA spokesperson Felicia Chou said after the hearing that if WFIRST’s budget were to be cut to pay JWST’s cost overruns, that would have the effect of slowing the project down. Those cuts would take place in fiscal years 2020 and 2021, the years NASA has identified it needs approximately $490 million to cover additional JWST costs.

“It is within the range of possibilities that the reduction to WFIRST would be roughly one third of its budget in each of those years, and so the net delay to launch might be up to a few years,” she said.

Bridenstine said during the hearing that no decisions had been made on how to cover those additional JWST costs. “By the 2020 timeframe is when we’re going to need to have additional funds. So between now and then we’re going to have to make determinations,” he said. “Right now that process is underway.”

He said those decisions would consider the guidance from decadal surveys and a desire to maintain a balanced portfolio of programs. He specifically assured one member, Rep. Mo Brooks (R-Ala.), that the extra funding would not come out of human spaceflight programs, particularly the Space Launch System. “This is relevant to the Science Mission Directorate exclusively, and that’s where, at this point, we’ve had discussions about what are the options going forward,” Bridenstine said.

Committee members used the two-and-a-half-hour hearing to express their frustrations with this latest delay, noting that the original concept for the mission called for it to cost $500 million and launch in 2007, versus a current lifecycle cost of $9.6 billion and launch in 2021. “This is 19 times the original cost and a delay of 14 years,” said Rep. Lamar Smith (R-Texas), chairman of the committee. “It doesn’t get much worse than that.”

They directed some of that frustration at prime contractor Northrop Grumman for human errors that contributed to the latest delays. “Contractors will have to deliver on time and on budget. If they cannot, they should be penalized,” Smith said.

Bridenstine said they have some options for what Smith called “contractor accountability” for JWST. Northrop is not currently receiving an award fee on its cost-plus contract because of these delays, he said, and won’t be eligible for about half of the award fee it could earn once JWST is successfully launched and commissioned.

“Those potential award fees would add up to, if they were to maximize it, about $60 million. We have already taken off the table $28 million of that $60 million,” he said.

Tom Young, the chairman of the JWST independent review board and the hearing’s other witness, offered a different approach to the award fee issue. “If I had this problem, I would take all of the fees that currently exist,” he said, “and I’d put them all together in one lump sum, and I would have the criteria for getting them the quantity and quality of data returned by JWST after it’s on orbit.”

Members will get their opportunity to discuss contractor performance during the second half of the hearing July 26, when Northrop Grumman Chief Executive Wes Bush will testify with Young. The two-part hearing was necessitated by scheduling issues involving Bush and Bridenstine.

Members had little criticism, though, of Bridenstine, a former committee member who has been on the job at NASA for only three months. Some of his former colleagues expressed confidence that he would be able to get JWST back on track.

“Your legacy, I suspect, will be determined by how well you, working with all of the wonderful people at NASA and all the contractors, deliver on finishing James Webb,” said Rep. Frank Lucas (R-Okla.)