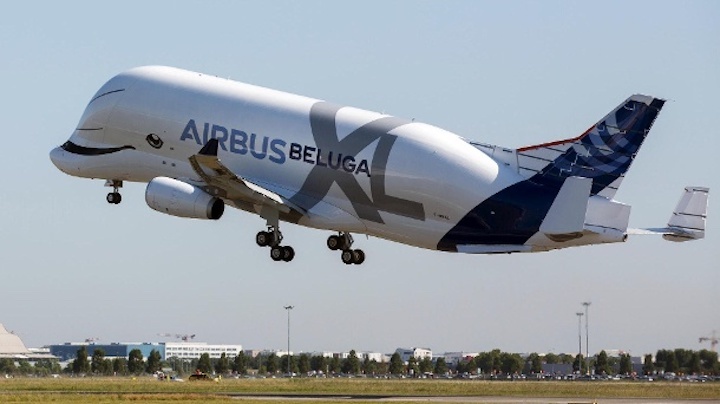 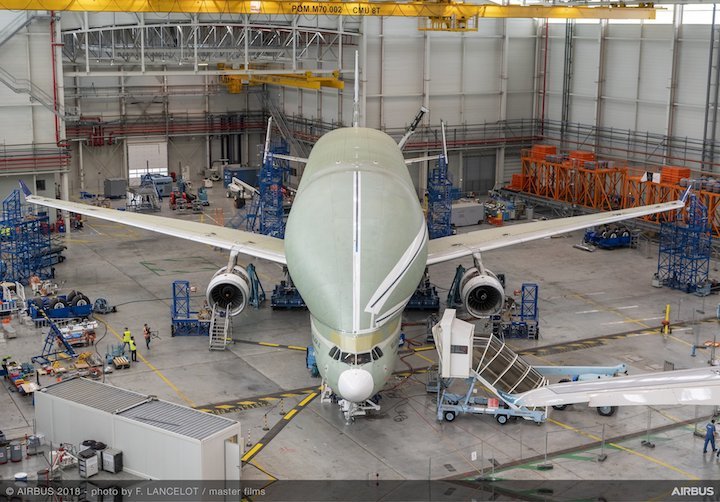 Transport aircraft one step closer to first flight in summer 2018

The first BelugaXL has passed the Ground Vibration Test (GVT), a requirement for certification of the aircraft that paves the way towards its maiden flight in summer 2018.

The objective of this test is to measure the dynamic behaviour of the aircraft and confirm theoretical models of various flight conditions, such as manoeuvring, flying in gusty conditions and landing. The test data also helps clear the aircraft’s flight envelope.

The GVT of the BelugaXL was performed by ONERA in collaboration with DLR over eight testing days using several hundreds of external accelerometers while the aircraft was stimulated by external shakers or seismic exciters.

The BelugaXL was launched in November 2014 to address the transport and ramp-up capacity requirements for Airbus beyond 2019. The new oversize air transporters are based on the A330-200 Freighter, with a large re-use of existing components and equipment. The first of five BelugaXLs will fly in summer 2018 and enter into service in 2019. 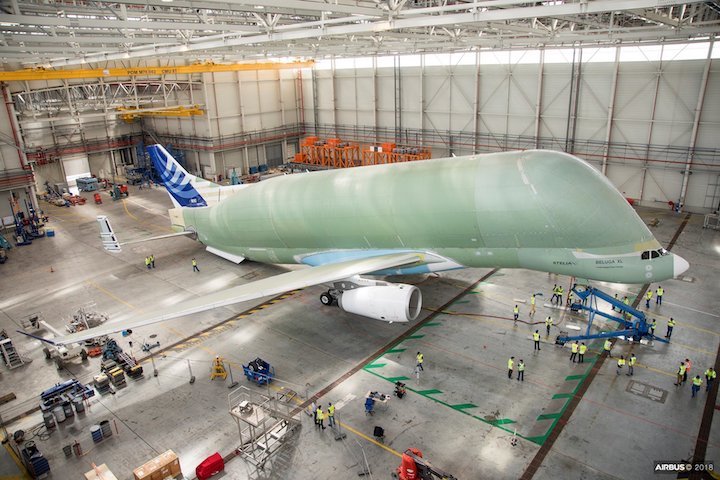 In preparation for its upcoming maiden flight, Airbus’ first BelugaXL is now in its heavy ground test phase – which focuses on the highly modified airframe for this next-generation oversize cargo airlifter.

According to ground test project leader Mathieu Laemle, a total of 72 development and certification ground tests must be performed before the BelugaXL’s high-profile first flight, which is planned for this summer. “With more than 48 tests already completed, we are on time,” he added. “The big challenge was to be able to anticipate or modify the test scheduling so as not to impact final assembly.”

Airbus has succeeded in keeping things on track thanks to early analysis of the requirements and excellent multidisciplinary collaboration between the design office, laboratories, tests and programme teams.

Intensive testing for the BelugaXL

Heavy ground tests started with the team weighing the no. 1 BelugaXL at “pitch zero” and then at “pitch nine,” lifting the aircraft’s nose by 3.5 metres to determine the empty weight centre of gravity. Next, they performed the standard loads and horizontal tailplane tests, which were followed by separate evaluations involving the dorsal fin and vertical tailplane.

The heavy ground test phase involves carrying out tests on the aircraft that would usually be conducted on a static cell. “It is unusual for us to perform tests like load calibration using the generalised finite element method of analysis on an aircraft which will fly, as we usually use a dedicated clean aircraft without any systems inside,” explained BelugaXL aircraft configuration leader Arnaud Puyo.

With the loads calibration test campaign completed, the team then began ground vibration testing performed in conjunction with the French ONERA aerospace research centre and DLR, the German aerospace research centre. The eight-day ground vibration campaign, which began 28 May, saw the BelugaXL tested while both empty and fully loaded. The activity required one week of intensive preparation during which the aircraft was put on pneumatic suspension and special shakers were installed to make it move.

The team identified 30 different locations for the 80-kg. shakers and during tests lasting two-to-three hours, sensors inside and outside the aircraft measured the structure’s response. Vibration data from the test are used in validating and improving structural dynamic models for the aircraft.

With the ground vibration tests now complete, subsequent steps ahead of the aircraft’s maiden flight include validating the flight test instrumentation and applying the BelugaXL’s special “smiling” livery.

Starting in mid-2019, the BelugaXL will gradually replace the existing five-member Beluga ST fleet – which is used for carrying complete sections of Airbus aircraft from different production sites around Europe to the final assembly lines in Toulouse, France and Hamburg, Germany.

Airbus BelugaXL rolls out of paintshop 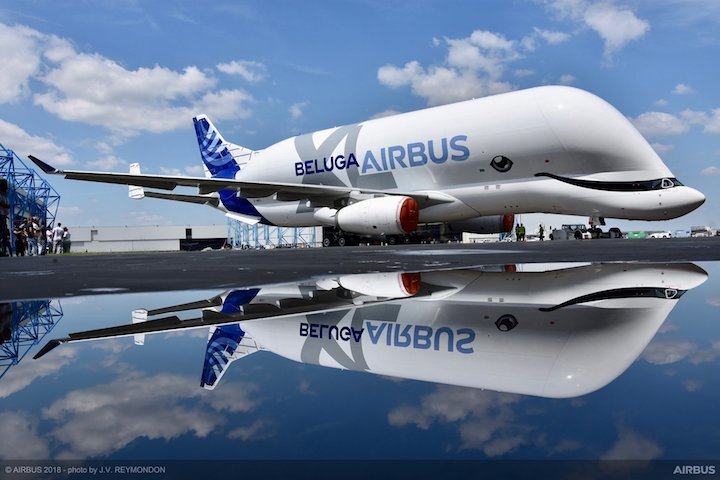 The first BelugaXL has rolled out of the paintshop unveiling a special livery making it look like a Beluga Whale. The livery was one of six choices submitted to Airbus employees through a poll where 20,000 people participated. With 40% votes in favour, the smiley livery won.

The BelugaXL will now undertake gound tests before first flight planned in summer 2018.

The decision to build the BelugaXL was taken in November 2014 to address the transport and ramp-up capacity requirements for Airbus beyond 2019. The new oversize air transporters are based on the A330-200 Freighter, with a large re-use of existing components and equipments. The first of five BelugaXLs will fly in summer 2018 and enter into service in 2019.

Putting a smile on the BelugaXL’s face 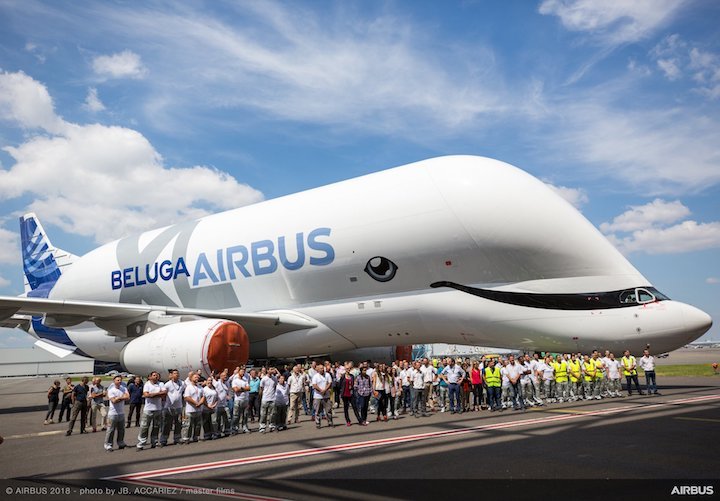 Airbus’ first BelugaXL is “all smiles” after rolling out from the paint shop in Toulouse, France, where this next-generation oversize cargo airlifter received its distinctive livery – which features beluga whale-inspired eyes and an enthusiastic grin.

With a bulging upper forward fuselage and enormous cargo area, Airbus’ BelugaXL already is highly recognisable. The addition of a cheerful face to the distinctly-shaped airframe will further reinforce it in the public’s mind. The unconventional paint scheme was selected by Airbus employees in a company-wide vote conducted last year.

The BelugaXL was launched in November 2014 to address the transport and ramp-up capacity requirements for Airbus beyond 2019. Derived from the freighter version of Airbus’ A330-200 jetliner, the BelugaXL is six metres longer, one metre wider and has a payload lifting capacity four-tonnes-greater than the current Beluga A300-600ST.

To be operated by the Airbus Transport International (ATI) subsidiary, the fleet of five BelugaXLs will take over transporting complete sections of Airbus aircraft among the company’s production sites around Europe and to final assembly lines in France, Germany and Spain.

The paint shop rollout is another major milestone as Airbus’ first BelugaXL concludes a comprehensive ground testing phase – including a total of 72 specific evaluations required prior to the aircraft’s maiden flight. This included the heavy ground test phase, which focused on introducing loads into the highly modified airframe, followed by an eight-day ground vibration campaign that wrapped up earlier this month.

Scheduled for July, the BelugaXL’s upcoming maiden flight will kick off a 10-month flight test certification campaign leading to planned service entry in 2019. 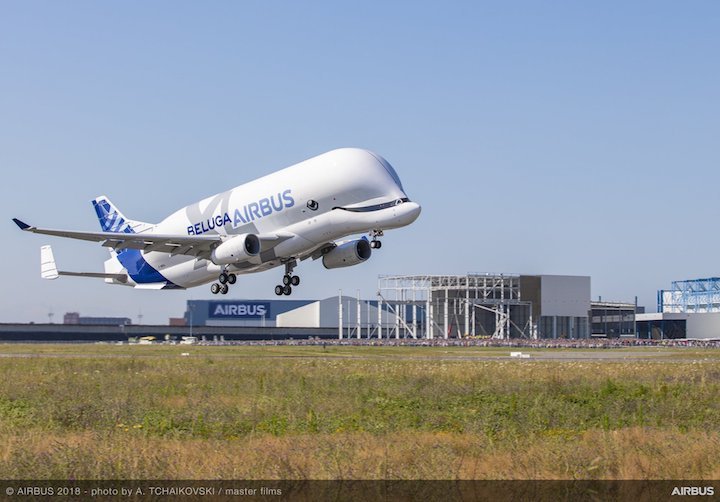 The first BelugaXL took off this morning from Blagnac in Toulouse, France at 10:30 hrs local time, for its maiden flight over south-western France. The aircraft is the first of five BelugaXL to enter into service later in 2019 and to gradually replace the BelugaST transporters.

The crew in the cockpit on board this flight comprised: Captain Christophe Cail, Co-Pilot Bernardo Saez-Benito Hernandez and Test-Flight Engineer Jean Michel Pin. Meanwhile, monitoring the aircraft systems and performance in real-time at the flight-test-engineer’s (FTE) station were Laurent Lapierre and Philippe Foucault.

The BelugaXL was launched in November 2014 to address the transport and ramp-up capacity requirements for Airbus beyond 2019. The new oversize air transporters are based on the A330-200 Freighter, with a large re-use of existing components and equipment.

Airbus' no. 1 BelugaXL – whose livery features beluga whale-inspired eyes and an enthusiastic grin – accelerates down the runway at France’s Toulouse-Blagnac Airport before lifting off on its maiden flight, performed 19 July 2018 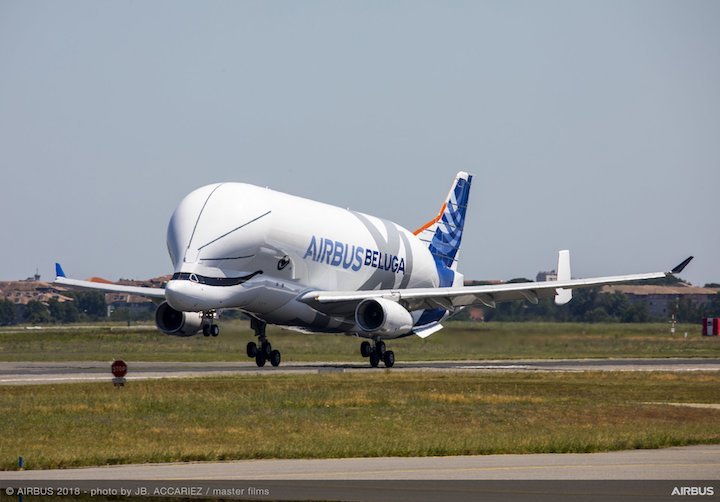 The first of five BelugaXL aircraft to fly has landed at Toulouse-Blagnac, France at 14:41 hrs local time after successfully completing its first flight lasting four hours and 11 minutes.

The crew in the cockpit on board this flight comprised: Captain Christophe Cail, Co-Pilot Bernardo Saez-Benito Hernandez and Test-Flight Engineer Jean Michel Pin. Meanwhile, monitoring the aircraft systems and performance in real-time at the flight-test-engineer’s (FTE) station were Laurent Lapierre and Philippe Foucault.

Following the first flight, the BelugaXL will undergo some 600 hours of flight test over 10 months to achieve Type Certification and entry into service later in 2019.

The BelugaXL programme was launched in November 2014 to address Airbus’ transport capacity requirements in view of the A350 XWB ramp-up and Single-Aisle production rate increases. Five aircraft will be built between 2019 and 2023 to gradually replace the five BelugaST.

The aircraft will operate from 11 destinations as Airbus’ method of transporting large aircraft components.

Based on an A330-200 Freighter, the BelugaXL is powered by Rolls Royce Trent 700 engines. The lowered cockpit, the cargo bay structure and the rear-end and tail were newly developed jointly with suppliers, giving the aircraft its distinctive look. 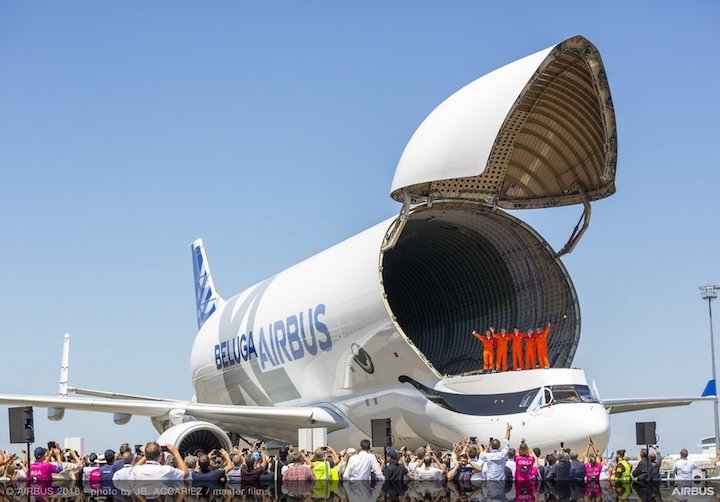