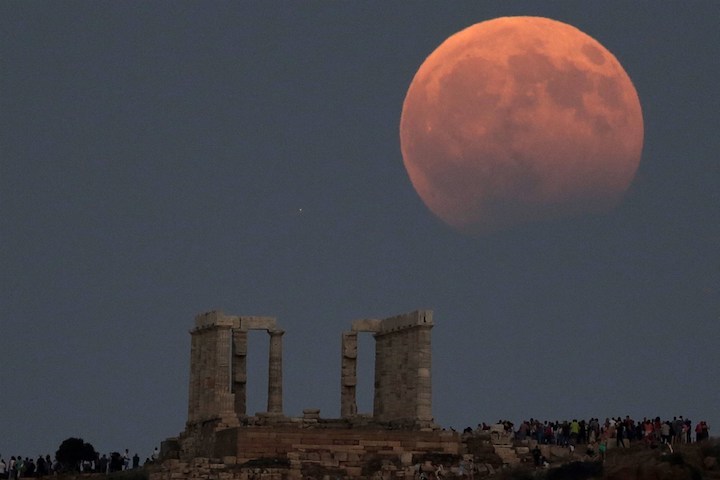 The Temple of Poseidon in Greece is seen during a lunar eclipse on Aug. 7, 2017.

The longest total lunar eclipse of the 21st century will turn the moon blood red in the night sky later this month.

The July 27 eclipse will be visible for 1 hour and 43 minutes when the moon is fully engulfed in Earth’s shadow — a period known as totality. This celestial show will not be visible from North America, but skywatchers in parts of South America, eastern Africa, the Middle East and central Asia will be in for an impressive event.

“This is a really cool eclipse,” said Noah Petro, a planetary geologist at NASA’s Goddard Space Flight Center in Greenbelt, Maryland, adding that the event will be extra special because, “[t]his is going to be the longest eclipse of this century.”

WHAT IS A LUNAR ECLIPSE?

Lunar eclipses occur when the moon, Earth and the sun are aligned and the moon passes into Earth’s shadow. This typically happens up to three times a year. The last lunar eclipse occurred on Jan. 31, an event that was dubbed a “super blue blood moon.”

Unlike with solar eclipses, there’s no need to wear protective eyewear when witnessing a lunar eclipse. In other words, these events can be viewed safely with the naked eye.

WHAT HAPPENS DURING A LUNAR ECLIPSE?

As the moon passes into Earth’s shadow, it will dim and darken. But then, something special happens.

“When it’s fully engulfed, [the moon] will turn this copper, blood-red color,” Petro said. “It will turn a deep, deep red when it’s at the greatest point in the eclipse.”

This dramatic coloring is actually caused by Earth’s atmosphere, which scatters light from the sun and casts it onto the face of the moon. “It’s like the projection of sunrises and sunsets onto the lunar surface,” Petro said.

WHAT’S THE BEST TIME TO VIEW THE LUNAR ECLIPSE?

The best time to see the eclipse depends on where you are in the Eastern Hemisphere. The best places to view the celestial event from start to finish are in eastern Africa, the Middle East, India and central Asia, according to NASA. In southern Africa and the Middle East, for example, totality will occur at or around midnight local time. In India and central Asia, the moon will start passing into Earth’s shadow at 10:44 p.m. local time, and the eclipse will peak at around midnight.

CAN I WATCH THE LUNAR ECLIPSE ONLINE?

If you live in a region of the world where the lunar eclipse isn’t visible, you can still experience the spectacular sky show. TimeAndDate.com is hosting a livestream beginning at 2 p.m. EDT (18:00 UTC) that will feature views of the “blood moon.”

WHY IS THIS LUNAR ECLIPSE SO LONG?

Unlike solar eclipses, which have short-lived periods of totality, the peaks of lunar eclipses can be quite lengthy. This month’s lunar eclipse is particularly long because of the moon’s position as it slips into Earth’s shadow.

When the sun, Earth and the moon are aligned, Earth casts a shadow that projects out into the shape of an imaginary cone. The longest lunar eclipses occur when the moon moves right down the center of this cone.

“In shorter [eclipses], the moon won’t pass through most of that shadow,” Petro said.

Coincidentally, the moon will also be at its most distant point from Earth in its monthly orbit in late July, meaning the moon will appear smaller in the night sky and will take longer to completely pass through Earth’s shadow.

WHEN IS THE NEXT LUNAR ECLIPSE?

The next total lunar eclipse will occur on Jan. 21, 2019, and will be visible from North America, South America and parts of Europe, Africa and the central Pacific. The period of totality during this eclipse will last for 1 hour and 2 minutes.

There will also be a partial lunar eclipse on July 16, 2019, visible from South America, Europe, Africa, Asia and Australia.

What Can Lunar Eclipses Do For Science?

On the night of July 27, 2018, the longest total lunar eclipse for the next 105 years will be visible across parts of Europe, Africa, Asia and Australia. Six months later, on January 20, 2019, there will be the 'Great American' lunar eclipse, where totality is visible across all 50 states.

The Moon's journey through the Earth's shadow produces one of the most dramatic and awe-inspiring sights in Nature. But can it help us deepen our understanding of Nature?

Dr. Noah Petro is the Project Scientist for NASA's Lunar Reconnaissance Orbiter (LRO) mission, which has been orbiting the Moon since June 2009. We talked to him about what lunar eclipses can do for science — and why we should study the Moon at all. 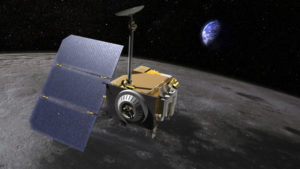 S&T: Firstly, a quick bit of background. Is it true that you had a 'light-bulb moment' at college that took you from studying geology to studying planetary geology?

NP: Yes, it was pretty much that. My Dad was involved in the Apollo program, so I was always interested in space exploration and the Moon. Then, going into high school, I had some amazing Earth Science teachers who got me excited about geology. It was a professor at my undergraduate institution, Bates College, who said, "Noah, you like space and you like geology. Did you know you could do the geology of things in space?" I thought, oh really? And that was that.

S&T: It's now 20 years later, and you're based at the Goddard Space Flight Center working on the LRO mission. What have been the most important results from the mission?

NP: That's a hard question to answer because we're learning so much. LRO has been at the Moon for almost nine years now, and no mission has ever operated at the Moon as long as that before. We're constantly rewriting our understanding of how the Moon works and changes. LRO has made measurements to constrain the rate at which new impacts are forming on the surface of the Moon. We can map volatiles on the lunar surface, including water. We can look at the Moon with a high resolution camera and see features that we've never seen before. We've identified volcanic deposits that appear to be very young: tens of millions of years old as opposed to billions of years old. LRO has ushered in a new era of lunar science.

S&T: During a lunar eclipse, the surface of the Moon goes from bright sunlight to darkness and back again in just a few hours. How can scientists use this to learn more about the Moon?

S&T: This is done with instruments on board LRO, plus telescopes on the Earth...?

NP: In the most recent total eclipse we didn't use the on-board instruments because the spacecraft is older and we were worried about what would happen to the battery. We recharge the battery using solar power, and when we're in eclipse we're in darkness for an extended period of time. So we didn't want to just leave instruments on and drain the battery. What we do instead now is that we make observations during partial eclipses, when the spacecraft is in darkness for a shorter period of time. We can still make Earth-based measurements if it's clear wherever the telescope is.

S&T: How do you choose which areas of the Moon to study during an eclipse?

NP: That's a good question. With the observations from LRO we basically look at what's going to be beneath the spacecraft during a particular orbit during an eclipse. For the telescopic observations we don't have the same limitations, so we can point wherever we want. We know the interesting features on the Moon, whether it's a particular volcanic feature, or a small fresh impact crater. There are enough intermediate-size new impact craters that we can see from the Earth that make worthwhile targets. And, ultimately, we can look at this feature, and then we'll look over here. We can move around compelling areas as the eclipse unfolds. The great thing about lunar eclipses is that they're nice slow walks. There's nothing you have to move around very quickly.

S&T: Why is it important to learn more about the surface of the Moon?

NP: Let's take three steps back. Imagine if a new continent appeared on the Earth that revealed the earliest processes that occurred in the solar system. We would absolutely want to know everything about that place. Well, that happens to be the Moon. It's three days away — it took Apollo astronauts three days to get to the Moon — and it's about the size of Africa in terms of land area. And the Moon itself records the processes that have affected the entire solar system: impact craters, volcanism, tectonism, interactions with the space environment, they're all recorded on the lunar surface. Every continent here on the Earth, some features on that continent tell us something about how the Earth works. The Moon is fabulous because it tells us something about how planets work.

So right here in our backyard we've got a representation of the full spectrum of types of objects in our solar system, apart from gas giants. We've got the Earth, with water and an atmosphere, and we have the Moon, with essentially no atmosphere and no water — there's water on the Moon, but no rivers and oceans and things like that. And so where the record on the Earth doesn't exist, we use the Moon to understand what happens on other objects. 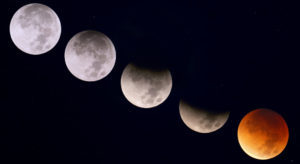 S&T: Any final thoughts for S&T readers ahead of the forthcoming eclipses?

NP: We can never underestimate the importance of pointing out to people why looking at the sky is amazing. Whether it's during an eclipse when the Moon turns red, or on a beautiful clear night when the Moon just looks the way the Moon always looks, use any opportunity we have to get people looking at the Moon, curious about the Moon, excited about it.

I should also point out — because I know the folks here at Goddard would want me to! — that in October we have our International Observe the Moon Night. And, of course, we have all the Apollo anniversaries starting this year. So it's a great couple of years for the Moon coming up.