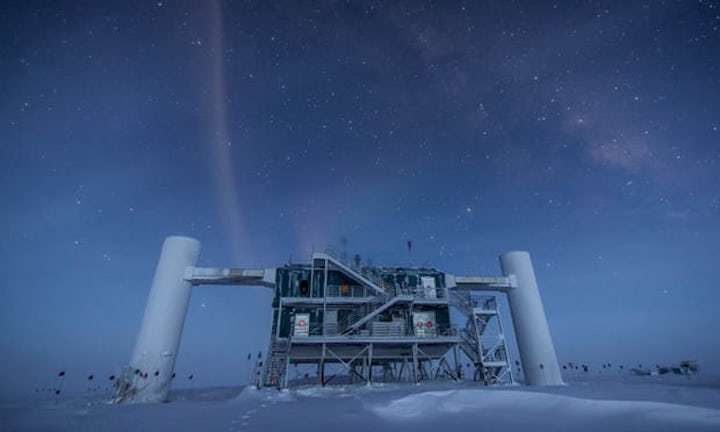 A mysterious, ghostly particle that slammed into Earth and lit up sensors buried deep beneath the south pole has been traced back to a distant galaxy that harbours an enormous spinning black hole.

Astronomers detected the high-energy neutrino, a kind of subatomic particle, when it tore into the southern Indian Ocean near the coast of Antarctica and carried on until it struck an atomic nucleus in the Antarctic ice, sending more particles flying.

The event, which took place on 22 September 2017, was captured by the IceCube experiment, a cubic kilometre of clear ice kitted out with sensors to detect such intergalactic incidents. Within a second of the particle being spotted, IceCube issued an automatic alert, prompting an international race to find the neutrino’s origin.

Because scientists on the IceCube experiment had worked out the path the particle took through their subterranean ice instrument, astronomers knew where in the sky to look for the particle’s source. A string of early observations came up blank, but days later Nasa’s Fermi Gamma-ray Space Telescope spotted the likely source: a flaring “blazar”.

Most galaxies are thought to have spinning supermassive black holes at their centres. But some of these black holes appear to pull in material at ferocious rates, a process that simultaneously sends streams of highly energetic particles out into space. Such galaxies are called blazars, although the term only applies when one of these streams is directed straight at Earth.

The blazar that appears to have sent the neutrino our way lies 3.7bn light years from Earth, just off the left shoulder of the constellation of Orion. While a single detection is not strong evidence, the IceCube scientists went back through their records and found a flurry of neutrinos coming from the same spot over 150 days in 2014 and 2015. Details are published in twoseparate papers in the journal Science. 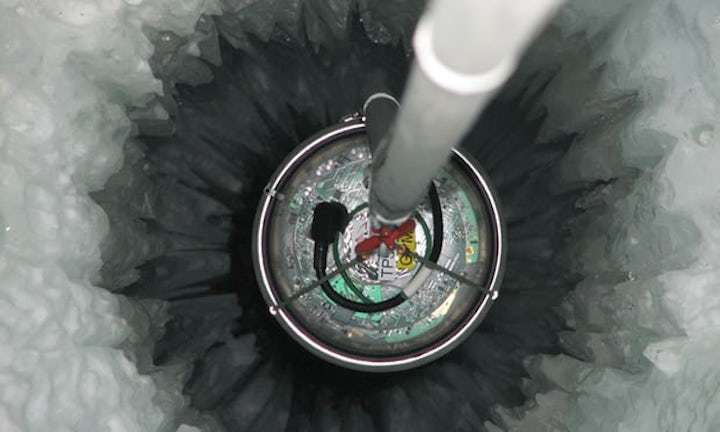 By discovering the neutrino’s origins, astronomers may also have solved the 100-year-old puzzle of what kinds of objects can create high-energy cosmic rays that occasionally hit the planet. Cosmic rays are made up of protons and other charged particles and are almost impossible to trace to their origins because the particles are deflected by magnetic fields as they travel through space. But high-energy cosmic rays also form neutrinos, which travel in straight lines so are easier to trace back to their source.

“We know that there are these very high-energy cosmic rays being accelerated out there somewhere and it’s a century-old mystery where they are coming from,” said Erik Blaufuss, who works on IceCube at the University of Maryland. “The problem with cosmic rays is that they go out into space and get scrambled.”

In tracing the neutrino back to its origin, scientists have launched a new era of astronomy, one in which the heavens can be observed not only with traditional telescopes, and even gravitational wave observatories, but with neutrino detectors too. “How much we are just starting to scratch the surface is the big question we are grappling with now,” said Blaufuss.

Neutrinos are extraordinary particles. So light that they were once thought to be massless, they stream continuously out from the sun in vast quantities. Most of the time they pass through objects in their path: about 100bn pass unnoticed through the area of a fingertip every second. Collisions with other particles such as that detected in Antarctica happen very rarely.

Julian Osborne at the University of Leicester was part of a team that used Nasa’s Neil Gehrels Swift Observatory to confirm the flaring blazar. “This is literally a new way of seeing the universe,” he said. “This really is the dawn of a new type of astronomy.”