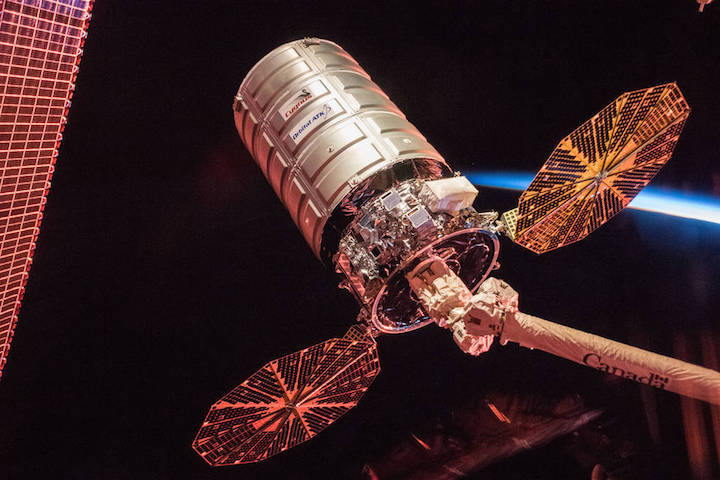 Cygnus cargo spacecraft is set to depart the International Space Station nearly two months after delivery of several tons of supplies and scientific experiments to the orbiting laboratory.
Credits: NASA

Nearly two months after Orbital ATK, now part of Northrop Grumman, delivered several tons of supplies and scientific experiments to the International Space Station aboard its Cygnus cargo spacecraft, the spacecraft is set to depart the orbiting laboratory Sunday, July 15. Live coverage of unberthing and release will air on NASA Television and the agency’s website.

Expedition 56 Flight Engineers Alexander Gerst of ESA (European Space Agency) and Serena Auñón-Chancellor of NASA will use the station’s Canadarm2 robotic arm to release Cygnus, dubbed the SS “J.R. Thompson,” after a leader in the aerospace industry. Live coverage will begin at 8:15 a.m. EDT for a scheduled release at 8:35 a.m.

Following its release, Cygnus will deploy a series of NanoRacks customer CubeSats. The cargo craft will then remain in orbit for an additional two weeks to allow the Cygnus flight control team to conduct engineering tests. The satellite deployment will not be broadcast on NASA TV.

Cygnus is scheduled to deorbit with thousands of pounds of trash on Monday, July 30, as it burns up harmlessly over the Pacific Ocean while entering Earth’s atmosphere. The spacecraft’s deorbit will not be broadcast on NASA TV.

Cygnus launched May 21 on an Antares rocket from NASA’s Wallops Flight Facility in Virginia and arrived at the station on May 24, carrying a variety of science and technology investigations.