Nachfolgende Infos von Robert Sheaffer, author of the book "Bad UFOs," plus the "Psychic Vibrations" column in The Skeptical Inquirer).: 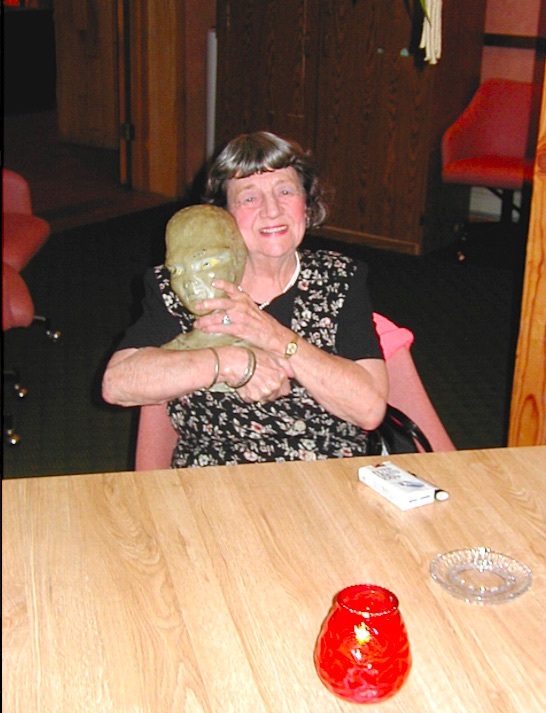 Betty Hill in 2000, with "Junior," a bust of her supposed
alien abductor. (Photo by author.)

t is almost time for this year's UFO Festival in Roswell, with its emphasis on supposed "UFO crash debris." But it turns out that there is an even more famous person in UFOdumb who claimed to have possession of  substantial fragments of debris from a crashed flying saucer. That person was Betty Hill.
The day after I shared my Blog posting of July 2 about supposed "crash debris" on the Facebook group UFO Pragmatism, the Swedish UFO researcher Roger Glassel posted to that same group,

Betty Hill has always stated she wasn't familiar with the UFO subject before the abduction, but in an interview with Clas Svahn, at her home back in '87, Betty stated that she witnessed a "UFO" crash some years prior to her and Barney's abduction. She even had debris from the crash.

Summary: Some years prior to their abduction Betty witness a "UFO" crash with some of her relatives. Her cousin picked up parts of the debris, and later Betty's sister handed over some of the debris to Betty. She had them for a while in a wardrobe, but later tossed them out in the backyard. The debris was later covered up with sand. When she saw the UFO at Indian Head she recognized it as the same type of UFO that had crashed. She speculated that she was abducted because they - the inhabitants - knew she had the debris.

The source of this information is a posting by the Swedish UFO researcher Clas Svahn. The article is in Swedish, but Google can translate it. It contains a video with recorded excerpts from his interview with Betty on April 13, 1987. His comments are in Swedish, but on his video you can hear Betty telling this story, in her own words:

Let me tell you something that happened. Two years ago, before this happened.* This was in the 50s. I was over here in Maine, visiting with the family. And it was a warm night and we were sitting outdoors on the porch .When we saw what we thought at that time was a plane. Very slowly going across the sky. [Here Svahn interrupts to translate Betty's comments into Swedish]
And while we're watching it, it exploded in mid-air, and burned. Now, listen, now, we've seen a plane blow up, we turned on the radio, we turned on the TV. Nothing. Wow. [another translation] [inaudible] from my mother's. My nephew had seen this burning debris come down from the sky. And he watched it, and when it cooled off, he got some of that. And my sister gave some pieces to me, and said that we don't know what it is. Maybe,  I have some friends at the university, maybe we can get someone to analyze it. [translation]

So, I had all these pieces. And I had them in the closet there on the top shelf. And now, you know, I didn't find anybody who was able to analyze them.  So, just before, about four days before we left to go on the trip, Barney said, "What is that stuff up on the top shelf? [translation] Well, just throw it away, we can use the shelf." Well,  I was having some fill put in  the back yard. So I took the pieces and I threw them in the back yard. And when they dumped the sand, it covered them. And three days later, we go on the trip. [translation] And, when we saw the craft, it was just like the one I saw explode.

*When Betty says "two years ago," she presumably means, two years before her famous incident. That would be 1959.

If what Betty told Svahn is true, then there still exists an unspecified quantity of UFO debris in the back yard of Betty's old house, covered by sand. So far as I am aware, this is the only time Betty has told this particular story, but here we have it in her own words, in her own voice. The story does not appear in her self-published book, A Common Sense Approach to UFOs [1995], although Betty does claim in that book to have come into possession of a UFO sample, in a different manner:


A UFO landed in a person's backyard. The next day this person went out to see if any marks could be found in the snow. There were no marks, but a line of small pieces of metal were found. They picked up several handfuls of this metal. Some of it was given to me.

Later, a group of "high ranking" military officers were at my home. They questioned why no one ever reported finding anything left behind by ufos. So, I showed them some of these metal pieces. They all gasped.   They asked in puzzlement, "Where in the hell did you get this? It is 'top secret,' but it has never been used in this country." I told them we probably both got it from the same place: A ufo.(p. 129)


This story in her book obviously does not refer to the same incident that Betty related to Svahn, which she supposedly witnessed. There is no getting around it: Betty made this claim about having "UFO crash debris." Betty was obviously a very skilled storyteller. Many have long suspected that she had a "fantasy-prone personality." While it is difficult to diagnose someone who is no longer living, it is becoming increasingly difficult to avoid the conclusion that Betty Hill just made shit up.
Betty's reference to "my sister" refers, presumably, to the mother of Kathleen Marden. I would be very interested to hear what Ms. Marden can tell us about her Aunt Betty's alleged 'UFO crash recovery' incident.
Quelle: Bad UFOs: Skepticism, UFOs, and The Universe, Robert Sheaffer